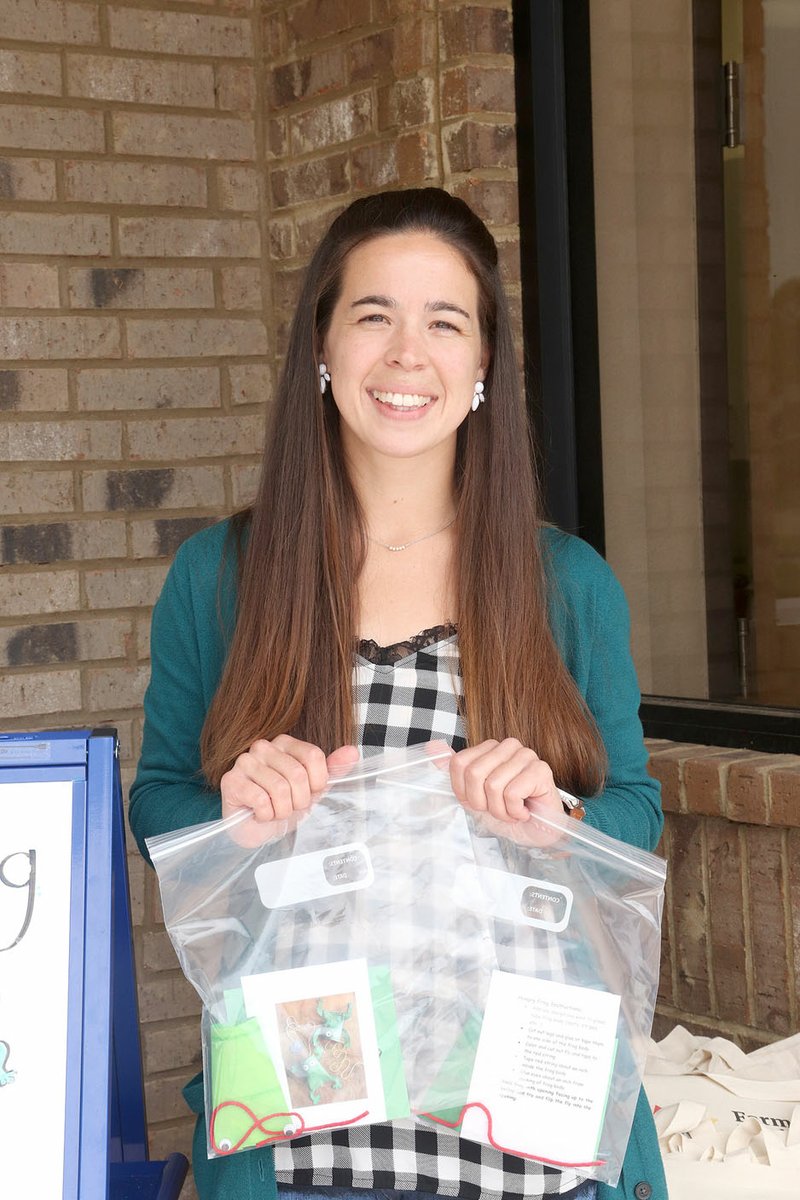 LYNN KUTTER ENTERPRISE-LEADER Marie Ingersoll, children's librarian for Farmington Public Library, shows some of the craft bags she has put together for parents to pick up for their children to work on at home.

FARMINGTON -- The new children's librarian for Farmington Public Library comes with a history degree and five years of experience as assistant librarian for R.E. Baker Elementary in Bentonville.

Marie Ingersoll is working on her library accreditation but said a history degree dovetails perfectly with working in a library.

"I had my magic moment and wanted to learn more. I did that daily with my students. It's about tying things together to give them connections," Ingersoll said.

Ingersoll started in February when the Farmington Public Library expansion project was underway. The library was open during the first part of the expansion but closed in March to remodel the inside of the building.

Shortly afterward, many places began to close temporarily because of the covid-19 pandemic.

Ingersoll has taken all the changes in stride and soon started the Little Cardinal's Storytime virtually through Facebook live.

A survey showed parents were interested in a craft so Ingersoll added that to her program. Parents sign up and pick up a craft bag with a project that goes along with that week's storytime. The bags are placed on a table in front of the library.

Rachel Sawyer, library director, said the city received more than 30 applications for the children's librarian position. The interview committee brought in seven candidates for first interviews and had two more rounds of interviews before making a decision.

"We were looking for someone who was good with 0-12," Sawyer said.

Ingersoll had a lot of great program ideas for different ages using her background working in a school library, Sawyer said, adding Ingersoll is "full of great ideas and is very energetic."

Farmington's summer reading program is next on the schedule and it starts June 15 for children, teens and adults.

The theme for the summer is "Imagine Your Story" and will include the Little Cardinal virtual storytime each week and craft bags for ages 0-4 and 5-12. Teenagers can pick up a Teen Summer Book Club swag bag with "goodies" to get teens in the reading spirit.

Parents, teens and adults can register for the program and log in their reading through a link from the library's website, www.farmpl.org. To register, call the library at 267-2674.

The teen summer program goes through July 15 and includes challenges for students.

The adult summer program goes through July 31. Those who log five books will be entered into a drawing for a Fire HD 8 Tablet. The prize drawing will be held Aug. 3.