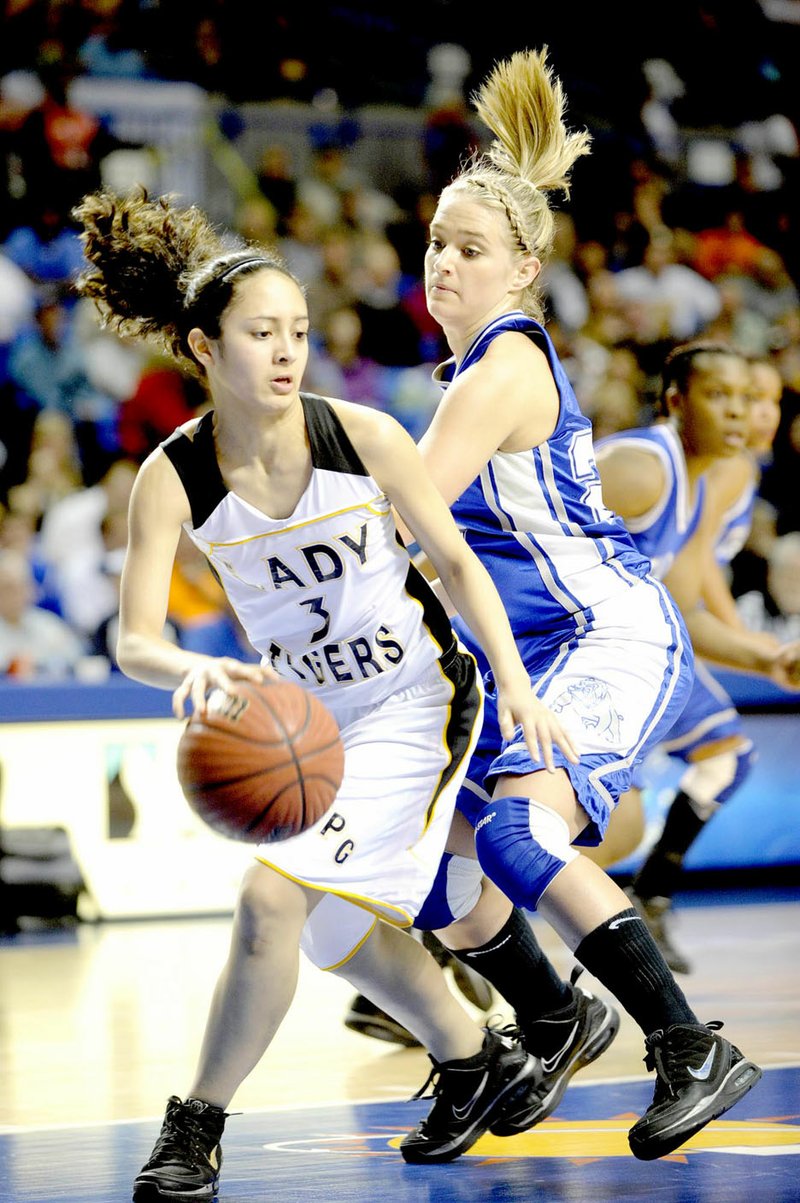 Arkansas Democrat-Gazette/KAREN E. SEGRAVE Prairie Grove's Michelle Lumsargis (No. 3) comes away with the rebound away from Star City's Cassidy Nealy (No. 22) in the class 4A girls state championship held Thursday, March 11, 2010 at the Summit Arena in Hot Springs. Prairie Grove defeated Star City, 59-56, to win the 2010 girls basketball crown. Prairie Grove knocked off West Fork, 54-46, in the 4A North Regional semifinal that year on their way to winning state.

FARMINGTON -- The date was Feb. 26, 2010, and Farmington hosted the 4A North Regional basketball tournament at Myrl Massie Gymnasium with neighboring Prairie Grove handing out a 54-46 defeat to West Fork.

Prairie Grove prevailed in the semifinal matchup to gain a shot at a Regional championship, but West Fork made them earn the victory.

No one Prairie Grove player could contain West Fork's Sarah Sagely who finished with a game high 21 points, 11 coming in the fourth period.

Fortunately the Grovers had more than one player to turn to, and in this contest it was a trio of scorers (Justyne Huber, Elysia Clement and Kendra Coyle) who provided the bulk of Prairie Grove's points and helped stave off a scrappy West Fork squad.

Coyle, who finished one point behind Clement and Huber with 16 points, had a basket "And-one" 3-point play, followed by a hoop on a hard drive to the bucket, capping off a 7-0 run by Prairie Grove to start the contest.

Prairie Grove's lead swelled to 10 points with 6:51 left in the second period when Coyle fed Huber for a fast break lay-up. West Fork (17-14) cut the deficit to three points, before Clement's "old-fashioned" three-point play started a 7-2 run to end the half and concluded with a Coyle stick-back at the buzzer.

Clement's basket at the end of the third period staked Prairie Grove to an 11-point, 42-31 lead going into the final stanza.

Thanks to Sagely's 11 points in the period, that cushion was deflated to four points with 1:32 left in the contest.

A good read by Coyle, who made a half-court pass over West Fork's pressing defense to Clement for a lay-up, made it a 6-point game.

Then with the lead back to eight points and with 19 ticks on the clock, Prairie Grove's Morgan Abernathy ended any chance of some last second heroics, when she drew a charge on Sagely, sending West Fork's star player to the bench with her fifth foul.

Prairie Grove ran the remaining time off the clock for the 54-46 win.

"This time of year, this is a great game for us. We had situations that will help us, like learning how to manage the game better when you're leading. We wanted to rush some things that we didn't need to when we were ahead, but any win is important right now," said Prairie Grove coach Kevin Froud.