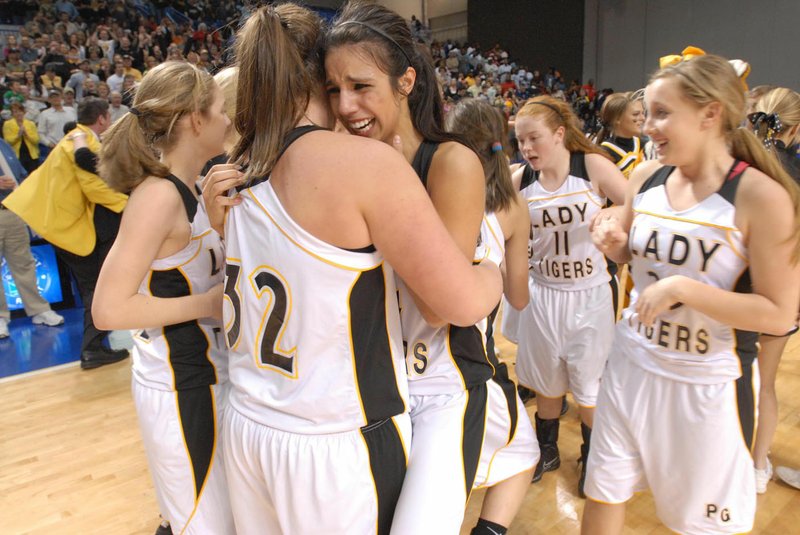 Arkansas Democrat-Gazette/KAREN E. SEGRAVE Prairie Grove's Julie Rutherford (facing) celebrates with teammate Alex Myers (No. 32) in their 59-56 victory over Star City in the class 4A girls state championship held Thursday, March 11, 2010 at the Summit Arena in Hot Springs. That championship season is the top story of the Decade: 2010-2019 for Prairie Grove as selected by the Enterprise-Leader.

Prairie Grove achieved balanced scoring using a mix of all classes with three girls in double figures to keep Star City at bay in front of a crowd of 5,350 on March 11, 2010, at Summit Arena in Hot Springs.

Freshman Justyne Huber, a 6-0 forward whose ball-handling skills matched her rebounding propensity to go with deadly free-throw shooting led the Lady Tigers with 15 points. She made 11-of-12 free throws and put the game away down the stretch with Prairie Grove coach Kevin Froud capitalizing on match-up problems Huber created for defenses.

"We started a freshman and a junior on that team with some seniors. In that situation there could be some jealousy or animosity, but there was nothing like that," Froud said. "They all wanted to win."

Senior Julie Rutherford, who could play either guard or forward at 5-9, made 6-of-9 shots to chip in 14 points. Rutherford helped out on the boards by yanking down 4 rebounds.

Junior Kendra Coyle came into the finals leading the Lady Tigers in scoring (12.0) and steals (2.2). Despite playing with a possible concussion sustained in the semifinal win over Lonoke, she turned in another solid performance getting both averages (12 points and 2 steals) along with 7 rebounds. Coyle was named Most Valuable Player of the 2010 Class 4A State tournament.

Rules regarding concussions have become more restrictive, but on March 11, 2010, Coyle opted to play.

That productivity across the board helped Prairie Grove overcome a 21-13 first quarter deficit and get back in the contest by outscoring the Lady Bulldogs 16-7 in the second to capture a 29-28 halftime lead.

"In the finals Star City jumped out on us. Morgan hit a big 3-pointer for us to kind of stop their momentum," Froud said. "We stole the ball and put up a layup right at the buzzer to take the lead at halftime."

The Lady Tigers expanded their lead with a 10-2 run midway through the third quarter, but couldn't shake Star City. The Lady Bulldogs trailed 46-42 going into the fourth and used an 8-4 run to tie the game at 50-50 when Jerrica Scott drew a foul while making a layup with three minutes left.

Her free-throw wouldn't go down, but Star City almost forced a back-court violation with intense pressure. Froud was able to get a referee's attention and called time-out to avoid the turnover. That marked a turning point with momentum shifting back to the Lady Tigers.

"There were numerous times where like they say it's better to be lucky than good. In the fourth quarter we threw a pass that barely skimmed over their heads and landed in Rutherford's hands. She was able to make a layup," Froud said.

Rutherford beat the defense for back-to-back layups triggering a 6-0 Prairie Grove run. Huber capped the spurt by hitting a pair of free throws, giving the Lady Tigers a 56-50 cushion at the 1:09 mark.

Star City rallied with Caryan Jones banking in a basket from close-range and Cassidy Nealy nailing the Lady Bulldogs' only 3-pointer of the contest, slicing Prairie Grove's lead to 58-55 with 43 seconds showing.

Star City had their chances, but Prairie Grove held on.

Juqencia Linsy was fouled but could only knock down 1-of-2 free throws. Prairie Grove threw the ball away and Star City in-bounded with 17 seconds to play, but couldn't score although they got two open looks.

Myer accounted for Prairie Grove's final point with a free throw with the clock down to one second. After she made the first, Froud instructed her to deliberately miss the second knowing Star City couldn't get off a decent shot.

"The clock was activated as soon as it touched her hands and all she could do was chunk it up," Froud said. "I was relieved when the horn went off. Star City beat us the year before in the quarterfinals. They were very athletic."

Star City had three girls in double figures led by Scott with 17 points while Jones added 11 and Yasmine Pace 10. Star City coach Becky Brown played 11 different girls in the championship contest. Froud didn't go quite that deep, but got the most out of all eight Lady Tigers he sent into the game including junior Courtney Galloway and sophomore Michelle Lumsargis.

The Lady Tigers held Scott in check. The 5-8 junior exploded for 36 points in Star City's 60-41 semifinal win over Stuttgart. She pounded the Lady Ricebirds underneath getting 9 rebounds and making 9-of-11 free throws to ring up 19 first half points as the Lady Bulldogs jumped out to a 37-17 lead at intermission against Stuttgart.

Froud wanted none of that and although Star City finished with an 18-9 advantage in offensive rebounds the Lady Bulldogs were limited to 36.8 percent field goal shooting while Prairie Grove hit at a 47.5 percent clip. Despite a double digit rebounding effort, Scott only got to the foul line six times and made just three.

Prairie Grove performed better at the free-throw-line going 18-of-23 for 78.3 percent while Star City was 13-of-20 for 65 percent. Neither team was able to break the other down off the dribble and consistently get layups. Prairie Grove tallied 3 assists total and Star City had just 2. Huber played her part defensively pulling down 5 rebounds to go with 3 steals and a blocked-shot.

When the game was over Froud told his girls, "Nobody can ever take this away from you. You're going to remember this as long as you live."

"I was blessed to be a part of a good group. The parents were very supportive of us as coaches," Froud said. "What I remember most is that it was pretty much a team effort. I was very lucky to have that team. We had great senior leaders, who didn't care about notoriety. They didn't care who scored. They hated losing more than they loved winning."