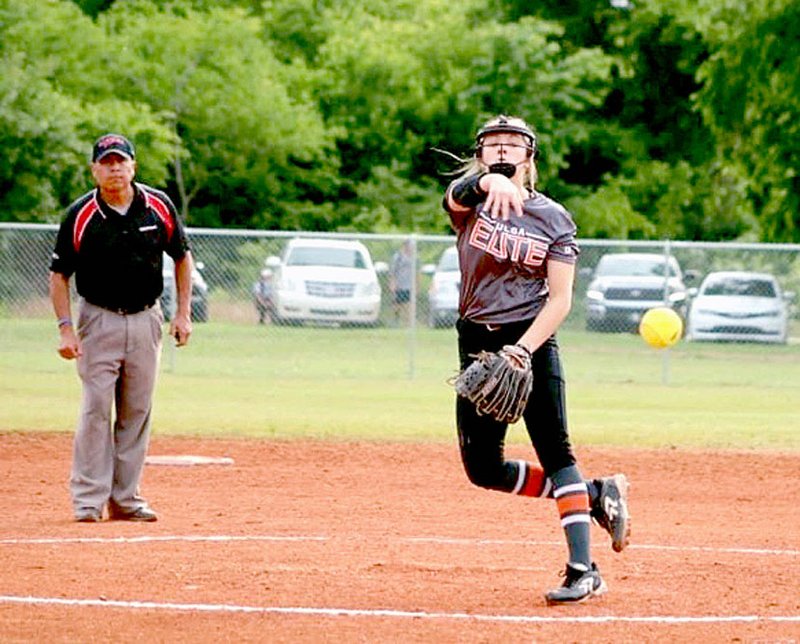 Submitted photo/Travel ball began in the region Memorial Day weekend with restrictions having only one umpire working the entire field from behind the pitcher. Brinkley Moreton, of Summers, shown pitching, played in a tournament held at the Sand Springs Parks &amp; Recreation complex in Sand Springs, Okla. Brinkley hit a home run and helped pitch the Tulsa Elite NWA06 team to the tourney championship by winning seven games on Sunday, May 24.

An hour-and-a-half into Memorial Day, Monday, May 25 and the day was already forever etched into the memory of Dax and Christina Moreton, of Lincoln.

The family was in dire need of sleep, but first they had to drive 108 miles to Summers arriving home at 4 a.m.

The Moretons had been up since 4:45 a.m. the day before. A two hour rain delay extended the marathon softball day which came to a climatic end with their daughter, Brinkley's Tulsa Elite NWA 06 team winning a championship at Sand Springs River City Park in the Tulsa, Okla. metro area.

"It's 1:30 a.m., seven games later and walking away champions! Super proud of these kids! Nice to be back at the ballpark," Christina wrote in a Facebook post announcing the victory.

As part of social distancing restrictions implemented a solitary umpire worked each game surveying the entire field from behind the pitcher.

"Sometimes it worked to our advantage and sometimes it didn't," Christina said. "It wasn't ideal. He had to watch all the bases, but we were glad to be able to go watch them play."

Brinkley and her team hadn't played a game since Feb. 29 and only got in a few team practices before the tournament. Tulsa Elite NWA 06 is comprised of 10 girls from Mansfield, Mena, Vilonia, Hackett, Greenwood, Clarksville and Sallisaw, Okla., plus Brinkley, a rising eighth-grader at Lincoln Junior High.

"Once Gov. Hutchinson said they could practice, we did; but hitting practice was broken up into two groups so we could have social distancing," Christina said. "Fielding practice was a little different as well."

The team got in two fielding practices and three hitting-only practices before the tournament. Brinkley refused to blame a poor start going 1-3 in pool play on a lack of team practice.

"It didn't really bother me that bad, it was still about the same," Brinkley said. "It was kind of hot, but it wasn't bad."

During quarantine Brinkley kept up her hitting and pitching lessons from her personal trainer, Jaclyn Herrera, who has coached her four years. She also worked out regularly on her own using the bullpen and batting cage installed in a shed on the family farm and with her dad catching for her.

"We never stopped our lessons with her because we wanted Brinkley to have a sense of normalcy," Christina said.

On the farm Dax sits on a bucket and catches for Brinkley, who throws in the 61-64 mph range. This brings up a new dynamic for fathers catching for sons and daughters honing their pitching skills during social distancing.

"It's kind of getting to the point where she's throwing at a velocity that it's getting kind of dangerous," Dax said. "It sounds silly, but it's true."

The new reality is dads may need to invest in protective catcher's equipment. Catching for Jalen Beeks, Ty Tice or Logan Gragg, a trio of Prairie Grove graduates drafted and signed by Major League Baseball clubs between 2014 and 2019, would be foolish without the proper equipment; and they aren't the only pitchers who can put zing on a baseball or softball.

While practicing in Arkansas players weren't permitted in the dugouts, but at Sand Springs under the Oklahoma State flag players were all in the dugout. Fans were allowed, but supposed to remain in their vehicles. Some grandparents came out to support athletes.

"I heard a couple of people say that they weren't going to yell at the umpires, they were just glad to be there," Christina said. "It was odd, otherwise than going to get some lunch, you wouldn't have known there was a pandemic going on. The concession workers handling food and beverages had to wear masks."

Tulsa Elite NWA 06 didn't start out the tournament well. They lost three of four games in pool play on Saturday, May 24 but rebounded to win seven games in-a-row to capture first place on Sunday and into early Monday morning.

"On Sunday morning we just decided to play good that day I guess," Brinkley said.

Tulsa Elite NWA 06 coach Michael Freeman raved about Brinkley's stint in the chalked circle asking Dax, "Did you realize that Brinkley threw 49 strikes out of 57 pitches? It was an unbelievable pitching performance."

Two days earlier with Brinkley batting in a morning game Saturday, May 24, Christina felt like shouting.