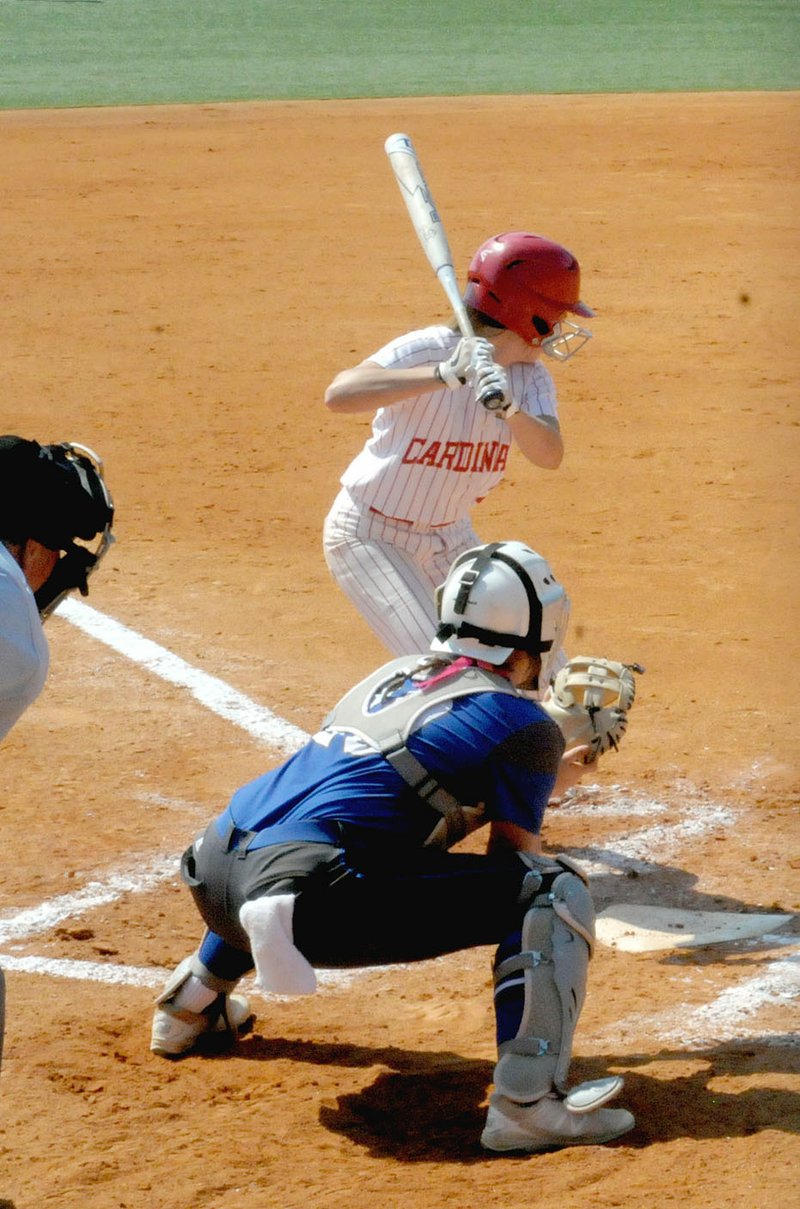 MARK HUMPHREY ENTERPRISE-LEADER Farmington's Shayley Treat, shown as a freshman, bats during the Lady Cardinals' 3-2 loss to Greenbrier in Saturday, May 19, 2018, 5A State championship game played at the Benton Sports Complex in Benton. Treat singled in this at-bat in the second inning.

BENTON -- Counting the 5A State championship game played May 19, 2018 Farmington has lost eight games-in-a-row to the Greenbrier Lady Panthers which could have changed this year.

Prior to the shutdown of spring sports, the teams were to meet April 2 with Greenbrier coming to town.

The last three losses all came by one run, including a heartbreaking 3-2 loss in the 2018 State 5A final at the Benton Sports Complex. Ironically, while the schools were both members of the 5A West Conference for the 2018 season, they hadn't played all season and didn't meet in 2017 either. The Lady Cardinals put forth an effort to break the strangle-hold Greenbrier has maintained from 2012, but couldn't push the tying run across. They went down swinging with two outs and two runners aboard in the seventh.

Not all were aware of the losing streak, which weighed on the minds of Farmington faithful in the week between the Lady Cardinals' May 12, 2018 semifinal 8-3 win over De Queen, a team they would meet a year later after reclassification in the 2019 4A quarterfinal, and the 2018 State 5A softball championship game. The thought was all the frustration would be quickly forgotten with a win in the state finals. A victory would grant Lady Cardinal fans license to celebrate a breakthrough. There was no better scenario to end a losing streak with the prize of winning a state championship at stake.

Unfortunately, the 2018 script didn't play out that way.

During the 5-4 loss, the Lady Cardinals took a 1-0 lead in the top of the third with Paige Devecsery singling. The Lady Cardinals added a run in the fifth on Alyssa Reed's single, which scored Bethany McKnight. Farmington tied the game at 3-3 in the sixth on an RBI single by Kaylee Purifoy that scored Carley Antwine. Greenbrier went up by two runs, but Farmington rallied in the top of the seventh with an RBI single by Madison Parrish to pull within, 5-4.

Jaylee Engelkes got the win for Greenbrier, allowing four runs on 6 hits, while striking out 3, and walking 2 in 7 innings. Devecsery, then a sophomore, took the loss and fell to 3-3. In six innings, she issued 4 walks, and allowed 5 runs. Engelkes wrapped up the win by inducing Tkeyah McDaniel to ground-out.

The 5A West adopted a double-header format beginning in 2015 with Farmington losing twice at home to Greenbrier on April 3, 2015, by scores of 6-3 and 7-1. Game one went into extra innings before Greenbrier won 6-3, scoring 4 runs in the eighth on a sacrifice fly by Maggie Garrett and 2 singles.

The Lady Cardinals jumped ahead to a 2-0 lead in the bottom of the second. Courtney Bodine singled and Farmington pushed across 2 runs on a groundout by Bethany McKnight. Charline Lasley got the win for Greenbrier, allowing 2 runs on 4 hits, with 6 strike-outs and 2 walks through 8 innings of play. Mackenzie Sill (5 runs, 6 strike-outs, 1 walk) took the loss.

In game two, the Lady Cardinals were bested 7-1 by Greenbrier. Greenbrier scored early, on an error, Engelkes' sacrifice fly, and an RBI single from Garrett. Brandy Wallace drove in a run for Farmington in the sixth with an RBI single.

Lasley struck out 3, walked 2 and gave up a hit while earning the win. Farmington's Lauren Thomas (5 runs, 4 strike-outs), was charged with the loss.

Farmington lost twice to Greenbrier during the Farmington/Fayetteville Tournament on March 16, 2013. The first loss, a 4-1 setback, sent the Lady Cardinals into the consolation bracket.

Greenbrier captured an early 1-0 lead in the bottom of the first with a double by Courtney Slaughter that plated Bailey Reynolds. Greenbrier scored 3 runs on a sacrifice fly by Aundrea Hardin, an RBI single by Kiley Trudeau, and a walk. Farmington's Lauren Blackburn went 1-for-2 and drove in a run when she doubled in the fifth inning.

Hardin allowed 1 run while throwing 5 innings with 3 strike-outs, no walks and 3 hits.

Farmington rebounded from the loss and worked its way back into the championship game of the 2013 Farmington/Fayetteville Tournament, but lost 9-3 marking the second straight 1-2 finish in the tournament by the schools. Farmington reached the championship by beating Mena, highlighted by Jordin Smith's 2-run homer over the left field fence.

Jessica Foster went 2-for-2, accounting for 3 Lady Cardinal runs by doubling in the first and third innings. The Lady Cardinals jumped ahead to a 2-0 lead in the top of the first. Oakley Sisemore singled and moved to second on a passed ball. Foster's double scored Sisemore and Payton Wiedner.

Greenbrier took the lead in the second, scoring 7 runs on 2 doubles, Trudeau's RBI single, and a walk. One run in the top of the third drew the Lady Cardinals within, 7-3, on an RBI double by Foster, but they could get no closer. Hardin earned the win for Greenbrier, allowing 3 runs on 5 hits in 4 innings with 3 strike-outs, and 1 walk and gave up five hits. Reynolds and Edwards combined to pound out 4 hits and 4 RBIs for Greenbrier.

After losing to Rogers 4-2 in the 10 a.m. game, the Lady Cardinals fought their way back through the loser's bracket defeating Nashville, Conway, Rogers and Fayetteville to earn a shot at the tournament title, which then included a backdoor.

The Lady Panthers struck quickly using a combination of hits and speedy base running to build a 2-0 in their first at-bat. Autumn Russell produced a leadoff single then quickly stole second. Ashley Anderson singled to score Russell and the Greenbrier lead grew to 2-0 when the speedy Anderson scored on an error with two outs.

Anderson walked in the third inning and scored on a deep double to centerfield by Reynolds pushing the Panthers to a 3-0 advantage. It would be all they would need in a game where Farmington had only one batter reach base in the first three innings on Shelby Barron's walk.

It was 11:15 p.m. when the game ended after a tired Farmington squad could not produce any offense and went down in order in their last at-bat.

The Lady Cardinals played an exceptionally tough 2012 schedule. Bryant and Bentonville wound up in the 7A championship game. Nashville and Pottsville were 4A finalists. Mansfield won the 3A state crown. Conway and Har-Ber were 7A semifinalists, Searcy was a 6A semifinalist, as was Greenbrier in 5A, and Jonesboro Westside in 4A. Farmington held their own, going 6-5 against these opponents.

Greenbrier squeeked by in the 2018 Class 5A State finals and they knew it. Coach Brian Butler talked about how the Lady Panthers couldn't get runs pushed across although they had runners in scoring position. Runners were left stranded at second and third to end the first inning. Another reached third in the second and two were left on base in the sixth. The winning run was scored in the fifth on a Farmington error.

Following the 2018 softball season the Lady Cardinals reverted to 4A status for all sports except football. Greenbrier did not compete the last two years in the Farmington Invitational held annually in March, which was cancelled this year.

The bottom line is this -- the Lady Cardinals are too good for Greenbrier to keep winning every time. Farmington fans wish it would have happened May 19, 2018, and will be plenty motivated to cheer next time the teams compete.