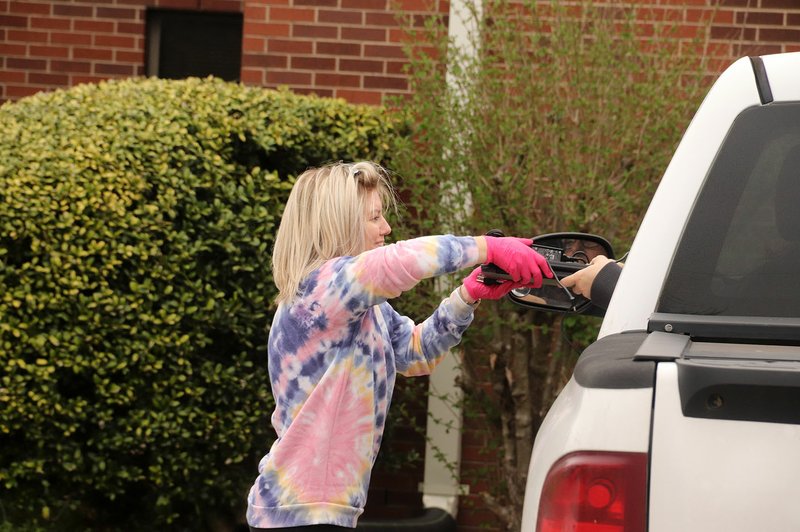 LYNN KUTTER ENTERPRISE-LEADER Michele Price, Lincoln Middle School principal, hands off a Chromebook to a middle school parent on Friday morning in the parking lot of the school building. Gov. Asa Hutchinson has extended school closings through April 17. The middle school announced that parents could pick up the computers for their children to use after spring break for online instruction.

FARMINGTON -- School officials learned on a Sunday afternoon that buildings would be closed for in-school instruction during the week prior to spring break and quickly began making plans for lessons and how to feed their students.

Four days later on Thursday, March 19, Gov. Asa Hutchinson announced he was extending school closings at least through April 17 as part of a concentrated effort to curb the spread of the coronavirus infection.

Farmington: parking lot of any of the school buildings.

First thing the next morning, administrators, teachers and nutrition staff immediately began meeting either in person, by conference call or video conference to plan for three more weeks of AMI (alternative method of instruction) days and three more weeks of making sure their kids had breakfast and lunch each day.

Bryan Law, Farmington superintendent, said his teachers already had academic packets for their students, whether through the internet or hard copies, to go through March 30.

Law said the district will bring its teachers back in March 30 so they can pick up equipment for instruction and other information and packets they may need through April 17. The district also is going to provide professional development opportunities for teachers for more training in specific areas.

The central office and offices for each building will be open during the three weeks with limited staff to help with any questions or concerns.

Law encouraged parents to monitor their child's work. If children do not have access to the internet, AMI packets will be provided as hard copies. These can be picked up at school offices after spring break or mailed to the home. Law said a limited number of computers are still available to take home.

In a press conference Friday, President Donald Trump announced that states will be able to request a waiver from standardized tests because of the covid-19 crisis throughout the country. Arkansas Commissioner of Education Johnny Key later announced the state would apply for the waiver for ACT Aspire tests and other standardized tests for the year.

Law said he agrees with this decision.

"We can't compare these kids to any other year we've had," Law said. "It would be unfair and biased information. I applaud them for the decision."

Law also expressed his appreciation to his administrators, staff, teachers, food service workers, technology and transportation workers for their efforts on behalf of students.

"Our teachers are doing a wonderful job of instruction. They are talking with students every day and meeting with them through technology."

He said he always believes the best instruction is a teacher in front of a classroom but noted teachers will rise to the challenge of this new environment.

"This is a learning experience for everyone. I think we're going to face this challenge the best we can."

Farmington provided meals to students the week of March 16-20 and will start back up with meals on March 30. Law said meals are available for anyone who wants them.

"We are gathering more information on alternative methods that use remote teaching and learning," Holmes said. "We also realize that not all students have internet connection and we are working to find resources to assist this issue."

David Kellogg, assistant superintendent, said the district provided a total of 1,636 meals last week, with the number increasing from 200 meals on the first day, March 17, to 536 meals on Friday. Nutrition staff, bus drivers and paraprofessionals helped with the meals.

"That's what we want to happen," Kellogg said. "We want to get them served."

The school is serving anyone 18 and under, whether they are in school or not. The district will continue to deliver meals to students while schools are closed.

Teachers are working on the additional AMI days and pushing out that instruction, Kellogg said.

"They've been working online, checking on kids and coming up with interactive lessons," he said, adding, "We've gone from near zero a week and a half ago to 90 miles per hour."

Kellogg said maintenance staff will use this additional time to get some projects finished around the campuses and have all buildings thoroughly cleaned.

Spears said she made the decision to shut all school buildings for two weeks, the week of spring break and the week of March 30-April 3. Offices will have limited staff available beginning April 6.

"We're going to hunker down for two weeks like they are telling people to do," Spears said.

The middle school handed out Chromebooks to students on Friday and schools are prepared to give out flash drives with instruction on them for those students who do not have internet access.

"We're pushing out more content and teachers are coming in to work on more (AMI) packets," Spears said.

She acknowledged in some ways, districts are "making this up" as they go along. But adds, "We'll make it work. We'll do the best we can for our students."

She pointed out some teachers are at home with their young children and also are providing instruction to their classroom students. A high school teacher, for example, can have up to 150 students to check on. A third-grade teacher will have 25 students but many of these students are on the poverty level and because of geographical locations, may not have access to the internet.

"We'll do the best we can and be at peace with it," Spears said.

One idea she is considering is some summer instruction or a summer boot camp to help kids catch up with their work.

"Reading level is huge," she said.

Lincoln is delivering meals during spring break and will continue through April 17 for its students.