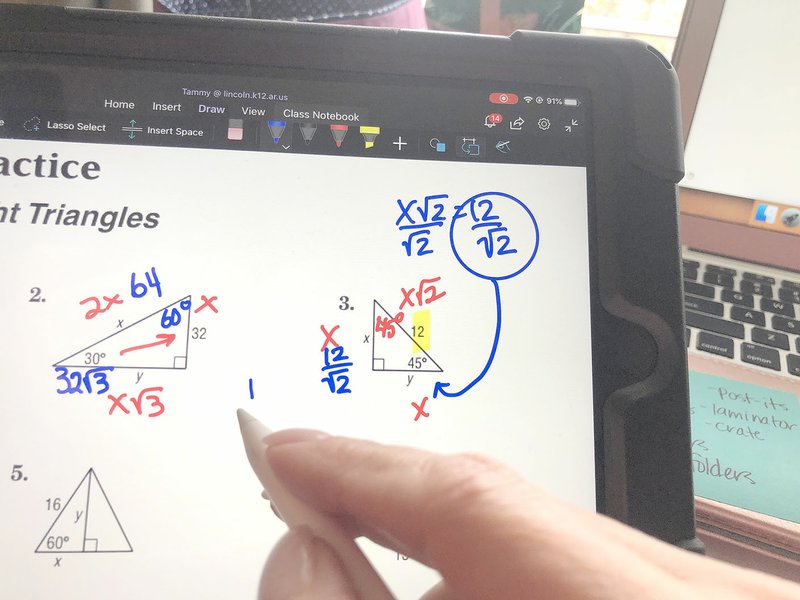 COURTESY PHOTO Tammy Brown, a math teacher at Lincoln High, shows how she uses her iPad like a whiteboard during a Zoom video session with her students. Brown teaches 9th-12th and has been at Lincoln for 15 years. Zoom is a video/audio communication platform and allows Brown to meet with many students at one time.

Gov. Asa Hutchinson initially ordered schools to close for in-school instruction from March 17 through the end of spring break to help stop the spread of the virus in Arkansas. Last week, Hutchinson, pointing out the virus has spread to numerous counties, announced that he was extending the closing of schools at least through Friday, April 17.

Lincoln schools delivered 700 meals the first day of the school closing and delivered more on subsequent days. Spears said the school is providing meals at school buildings, along the bus routes and dropping them off at different places in the district, such as Evansville Fire Station.

She said the district also has made the decision to provide meals during spring break. Bus drivers and Aramark employees were on board with the idea because that means they will be able to continue to work, Spears said.

Spears said the district received permission to provide meals for anyone under 18 in the home, even younger brothers and sisters.

"We've had AMI days available every year but it's not had a big testing of it, like this," Spears said. "One question is the testing window for standardized tests if school closings are extended beyond spring break. She said any decisions to change the testing dates would be made by the department of education."

Jill Jackson, Lincoln elementary principal, said her teachers provided instruction for students for eight days. If the governor and Arkansas Department of Education decide to extend the school closings, she said teachers would reconvene and come up with plans for the future.

Jackson said teachers are available all day through email or other communications to answer questions and help students. The school also provided online resources for parents, Jackson said.

If the governor and department of education decide to extend school closings, Jackson said her teachers would have to reconvene and come up with plans for the future.

She stays in contact with her students using Zoom video chat, a platform where she can communicate by video with many students at a time. She had 15 students join her first Zoom session, Brown said.

With the Zoom technology, Brown said she's able to use her iPad and share her screen with her students. As she works problems, students can see her work.

"It's like I have a white board and they are seeing that," Brown said.

She's also given her students other resources to use.

Her geometry students are more independent learners and are able to work at their own pace but Brown said she's available to answer questions and work on problems. She monitors their work and is available for zoom sessions if they are struggling with problems.

Brown last week said she wondered what her day would look like teaching from home and found she stayed busy with Zoom lessons and fielding emails and questions throughout the day.

"I know students were doing what they were supposed to do," Brown said. "It actually surprised me. At Lincoln I am so thrilled we're given the technology that I'm able to do this. It was just phenomenal, the way it worked."

She said some of her students were working on their assignments on the schedule of their regular school day. In addition, she said she's seen an outpouring from resources all over the country to help assist teachers during this time.

"With the access we have to teach now in this instance, the AMI days don't have to be wasted," Brown said.

If the school closing is extended (which it has been), Brown said her next step will be to try to recreate the classroom with her students to make it more interactive.