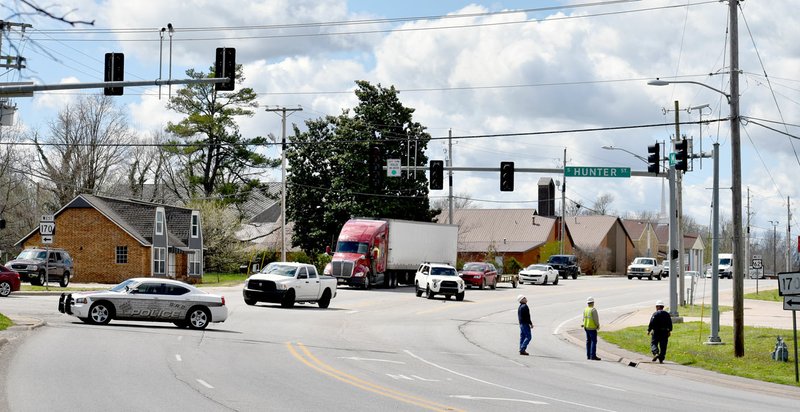 MARK HUMPHREY ENTERPRISE-LEADER Utility company employees examine overhead power lines while police divert traffic from Main Street on March 24 after a truck struck power lines causing them to fall on the street. Farmington has experienced at least seven power outages since Aug. 26, 2019, with six documented in the last 93 days. The latest outage occurred due to weather Thursday night, affecting 804 SWEPCO customers and causing police to block off State Highway 170 between Briarmeadow Street and Wolfdale Road while crews worked to restore power.

FARMINGTON -- At least six separate power outages have created disruptions in Farmington residences and businesses in the past three months.

The latest occurred Thursday night when a sizable portion of Farmington along the U.S. 62 corridor went without power for an hour and 45 minutes. According to information obtained from SWEPCO online, 804 customers were affected and weather was listed as the cause of the outage.

FARMINGTON POWER OUTAGES AT A GLANCE

*Times and length are approximate. Power to some customers was restored earlier than others.

Fire Chief Mark Cunningham said lightning struck one of the new electric poles on state Highway 170 and caught the top of the pole on fire. Farmington police blocked off Highway 170 also known as South Hunter Street from Briarmeadow Street to Wolfdale Road while crews worked to restore power.

The outage extended as far east as Farmington Village on Main Street, which retained power although businesses in the complex were already closed when the outage occurred around 8:20 p.m.

Walmart Neighborhood Market, which had closed for the night, marked the approximate western boundary of the outage on Main Street. Exterior lights illuminated the Walmart parking lot, in contrast to other businesses nearby that remained in the dark. Other businesses along Main Street going east also lost power. The outage affected some neighborhoods off both sides of Main Street.

Power was restored about 10:05 p.m., but official notification that power was back on didn't come for customers signed up for SWEPCO text alerts until 11:23 p.m.

At least seven power outages occurring within Farmington have been documented since Aug. 26. The last six have happened in a 93-day span.

Tuesday, Feb. 4, an outage began around 1:15 p.m. That incident was caused by a truck traveling westbound on Main Street striking a utility pole at the intersection of Main and South Hunter which knocked out power to 1,500 SWEPCO customers including Farmington school buildings and businesses along U.S. 62 backing up traffic for most of the afternoon. Power was restored by 3:05 p.m.

Tuesday, March 24, the Feb. 4 episode virtually repeated itself. An outage began around 12:30 p.m. following another traffic accident at the intersection of Main and South Hunter when a semi-truck traveling west on Main Street caught overhead utility lines, causing lines belonging to Southwestern Electric Power Co. and Cox Communications to fall across the highway.

Once again traffic had to be diverted for an extended period of time. Police blocked off U.S. 62 from Broyles Street to the Highway 170 intersection while crews repaired lines.

According to SWEPCO, 1,616 customers were affected by the outage. The company restored power to about half of those at 2:11 p.m. and electricity for the rest of the customers came on at 4:45 p.m.