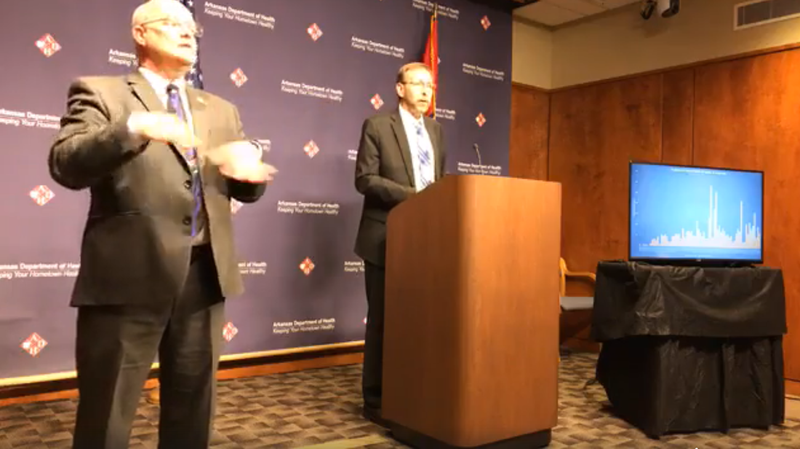 Five more Arkansans died of covid-19, state Department of Health Secretary Dr. Nate Smith said Wednesday, and the total number of cases since the beginning of the outbreak crossed 5,000.

The case total rose to 5,003. Of those, 1,044 are active, meaning a patient is still ill, as opposed to recovered or deceased.

Of the active cases, Smith said 85 are in nursing homes, 315 are in correctional facilities and 644 are in the general population.

Smith said the state performed a record number of tests in one day Tuesday, 4,396.

Gov. Asa Hutchinson was not present at the news conference because he was in Washington D.C. meeting with President Trump and Vice President Pence.

Smith said Hutchinson would be returning by tomorrow and the guidance for allowing team sports and summer camps to begin would be released Thursday, a day after originally planned.

Hospitalizations increased slightly to 79, and the number of patients on ventilators rose to 16.

He said 609 inmates at the federal prison in Forrest City have been infected, as have 17 staff plus one contractor. Data for that facility are still coming in, Smith said, because testing has been done by federal entities, leading to a delay in reporting to the state.

Smith and two other Department of Health doctors spoke Wednesday about creating safe work environments amid the pandemic.

The department has consulted with various industries and workplaces to create better conditions to minimize spread of the virus, as well as worked with facilities once an outbreak occurs.

Smith said aside from nursing homes and prisons, meat processing plants are vulnerable to outbreaks. He said about 100 cases have occurred at such facilities in the state, and about half remain active.

1:35 p.m. UPDATE: The number of coronavirus cases in Arkansas has passed 5,000, going up 80 to a total of 5,003 by Wednesday afternoon, Arkansas Health Secretary Nate Smith said.

Smith also said 1,044 of those cases are active cases.

Arkansas Health Secretary Nate Smith, as well as State Epidemiologist Jennifer Dillaha and Medical Director for Infectious Disease Naveen Patil will speak at the briefing, according to a news release issued Wednesday by the state Department of Health.

[Don't see the video above? Click here to watch.]