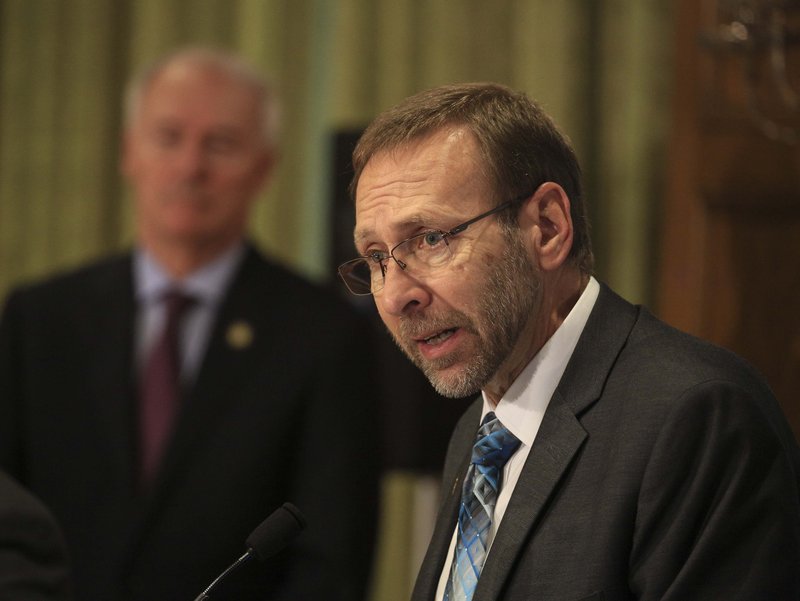 Dr. Nate Smith, Arkansas secretary of health, is leaving the state at the end of August to take on an unspecified role with the federal Centers for Disease Control in Atlanta, Gov. Asa Hutchinson announced Tuesday at his daily covid-19 news conference.

As head of the Health Department since 2013, Smith has been a member of the governor's cabinet and a top advisor to the governor in the state’s response to the novel coronavirus.

In his career at the agency, the married father of four has been a branch chief for infectious diseases, state epidemiologist and deputy director for public health programs. His last day will be Aug. 28, the governor said.

Smith will be succeeded on an interim basis by the Health Department’s chief medical officer, Dr. Jose Romero, a pediatrician who has been recognized by the CDC for his work promoting childhood immunizations. Romero is also chief of pediatric infectious disease for Arkansas Children’s Hospital and the University of Arkansas for Medical Sciences College of Medicine.

At the governor's briefing, Smith told reporters that 4,322 patients have now recovered from the virus, an increase of 83 since Monday. In his presentation, Smith also offered reporters more insight into the demographics of the disease. He said 50.7 percent of the state’s patients have been white, while 37.1 percent are black patients, who also succumb to covid-19 at about that same rate.

So far, about 10.2 percent of the patients have been Hispanic, but of the 150 cases detected in the community since Monday, 42 percent were among Latinos, Smith said

“Covid-19 affects all of our communities but a community we're starting to see an increasing number of cases is the Latino community,” he told reporters.

The increased accessibility of testing is possibly contributing to that rise, Smith said.

Age-wise, only 14.3 percent of the infected are ages 65 and over, however, that group has accounted for 74 percent of the deaths, he said. The largest single age group is the ages 25-44 category, which is 39.3 percent of patients,

“I don't think a lot of young people think they're at risk but this is actually the largest single age group," he said.

The announcement of Smith’s departure comes as Arkansas has surpassed its goal of testing two percent of the population, Hutchinson told reporters Testing has also surpassed his monthly goal of 60,000 tests to reach 61,922 as of Tuesday, the governor said. Another 2,984 tests were conducted, with the state’s positivity rate at 3.3 percent, which Hutchinson said was “well below” federal guidelines.

As of Tuesday, Arkansas has reached 6,180 cases, with an increase of 151 overnight, the governor said. Two more patients have died bringing the state’s total to 119. Eight more patients have been hospitalized since Monday to increase the total from 99 to 107.

Tuesday morning, Hutchison spoke to ABC’s "Good Morning America" about Arkansas’ response to the pandemic. He attributed an increase in covid-19 testing in the state for recent spikes in active cases.

Arkansas saw its largest increase in daily positive tests on Thursday with 455, the most since pandemic monitoring began, then recorded a second peak over the weekend, GMA reporter Whit Johnson said while speaking with Hutchinson.

Asked whether eased restrictions caused the increase, Hutchinson said he’s seen no evidence to support that, particularly since the new cases are broadly spread across the state.

“I cannot attribute it based upon the data at this point,” the governor said. “We're looking at it [data] every day. Part of it is, we've almost doubled the number of tests that we're doing. When you look at the data, you see that it's spread out among the state. You don't see a large outbreak in a particular area.”

The state’s "phased approach" to re-opening lets authorities keep an eye out for potential outbreaks, Hutchinson said. The state plan is working and will work as long as residents follow safety guidelines for masking and social-distancing, Hutchinson said.

"I think we've made the right decision to start lifting restrictions in terms of our economy. We've got to open up, we've got to move our economy but we ask all of our citizens to be responsible, to respect the guidelines,” the governor said. “We didn't do it [reopening] all at once, and that way it allows us to measure and to see if we have any increase in cases.”

[Video not showing up above? Click here to view » https://www.youtube.com/watch?v=UpSqx-Msxco]