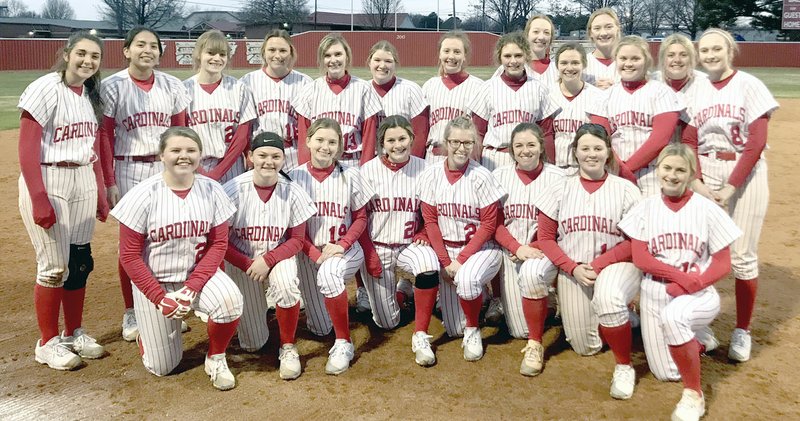 FARMINGTON -- A team-wide sense of humor serves to buoy Farmington's softball program despite the pain of losing the 2020 season to covid-19.

Veteran Farmington softball coach Randy Osnes recently spoke with a parent about situations as far as it's horrible that they've lost this season, based on what the Lady Cardinals had as far as talent.

Osnes told the parent, "We deal with this annually. We lose these seniors every year and from a coach's perspective, especially as you start getting older, it gets tougher and tougher on you losing these kids, these relationships."

He will tell all 10 seniors as they go on to the next stage of life, "Hey, just text me and let me know everything's going good."

Yet, he knows three or four will do that for three or four years and all-of-a-sudden their life gets busy and it's hard for them to find time to communicate.

"That's tough on an old gray-headed guy," Osnes said. "But besides the players, it's the fact of losing those relationships annually with those parents."

Having parents walk through the door of his office at the indoor facility just to hang out and say "hi" or come to his house for an awards banquet or team function means the world to Osnes.

"Then all-of-a-sudden you're not going to see those folks unless it's a by-chance meeting at Walmart or wherever. It's tough and it's getting tougher as I get older," Osnes said. "You get some great bonds and some great relationships. You know, we all feel like we all got cheated, not just on the playing time and the games that we missed, but hanging out with each other and just really enjoying each other's company."

Osnes balances those feelings by finding ways to laugh, exhibiting a passion for facing life's journey with humor equal to his desire to consistently produce excellence on the softball field.

"They might be pretty good if they can overcome their coaching," is the annual joke Osnes plays on himself when answering questions about his team each preseason.

But this season Osnes realized tremendous potential to exceed even the loftiest expectations of those who watched the Lady Cardinals finish as State Runner-up in 5A in 2018 and State Runner-up at the 4A level in 2019.

"I've always downplayed every team, but it was evident last fall they could be pretty special," Osnes said. "They have a team chemistry. There were things this team could do which I had not seen since 2005."

Osnes was referring to a Farmington state championship team that went undefeated in Arkansas that season.

"Everyone in the lineup could hit it out of the park and they're not all seniors," Osnes said. "What was awesome was we had 10 seniors and all of them played a role."

The Arkansas Activities Association imposed a dead period in March prohibiting coaches from engaging in any type of face-to-face contact with players and schools closed for on-site instruction.

With these restrictions in place team meetings were conducted using social networking technology over the Internet.

Zoom, a service which provides videotelephony and online chat services through a cloud-based peer-to-peer software platform, became the alternative means of connecting teachers to students and coaches to players through teleconferencing referred to as Zoom Meetings.

According to Osnes a typical Zoom Meeting lasts from 45 minutes to an hour. Coaches tend to take a business-like approach imparting information and answering questions while using the technology.

"We normally get all things out of the way," Osnes said. "We talk to them about their grades, the Triple A, what's going on with them. Early on it was the dead period, we had to explain that to them."

The players decided to lighten things up.

The Virtual Background feature allows Zoom clients to display an image or video as their background during a Zoom Meeting. The feature works best with a green screen and uniform lighting, to allow Zoom to detect the difference between the client and their background.

Tech-savvy teenagers figured out real quick how to use Zoom to sass one another. Now when Osnes conducts a Zoom Meeting with the softball team he sees a constant stream of ever-changing images such as baby pictures players have posted of one another.

"You see all these different backgrounds changing. It's typical baseball and softball stuff playing jokes on each other," Osnes said.

Tops among the pranksters are twins, Kally and Keely Stout, who can't resist trying to one-up each other.

Humor may be the backdrop, yet as creativity and individual initiative rises to the forefront the innovation becomes a coach's dream.

The Lady Cardinals found a means to cheer up their coaches, who can't always voice their own personal heartbreak over the loss of the season.

In Osnes' eyes, even if they didn't get a chance to pursue a 2020 state championship, these Farmington girls are the cream of the crop.