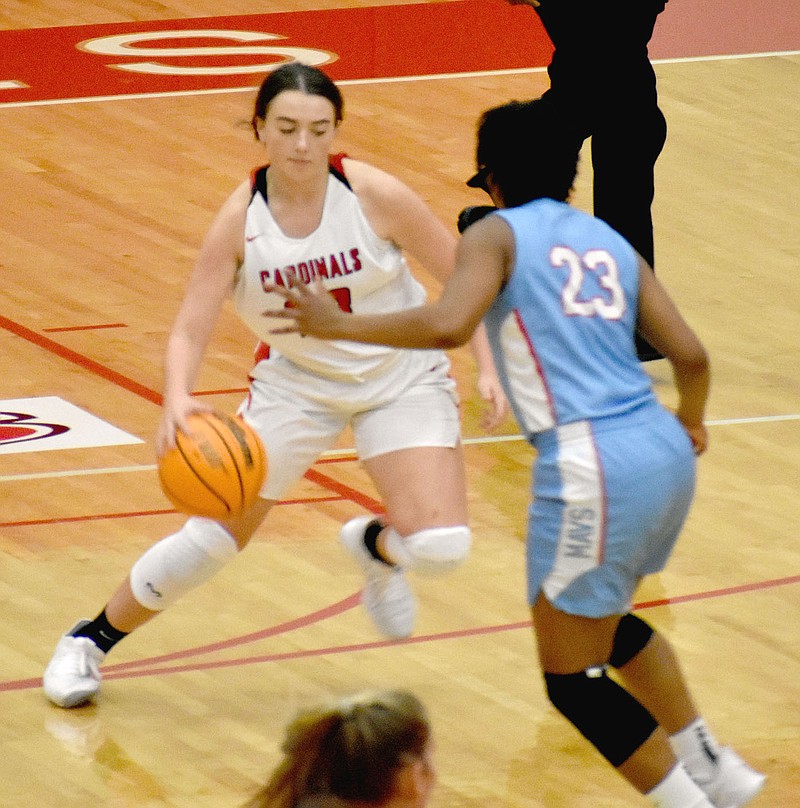 FARMINGTON -- Fort Smith Southside did its best to slow Farmington down but the Lady Cardinals full-court game got the best of the Lady Mavericks, 65-33, on Tuesday, Nov. 10.

Farmington struggled in some areas, yet excelled on the fast-break in the season-opener for both teams at Cardinal Arena.

"The one thing that we needed to do was establish the tempo and the pace early on and I thought our kids did a really good job of that," said Farmington coach Brad Johnson. "I know that our kids were extremely active all night rebounding the basketball really, really well."

Back-to-back 3-pointers by Morgan Brye and Carson Dillard helped Farmington open up a 23-7 lead. Late in the half Megan Hernandez took a steal all the way to the hoop finishing with her left hand. Farmington led 35-16 at the half and got it over 20 by erupting for 24 points in the third.

With the lead down to 19, Trinity Johnson spotted up in the left corner, received a cross-court pass and drilled a trifecta upping the margin back up to 42-20. She started slowly missing her first nine shots, but classmate Tori Kersey put 22 points on the board with Carson Dillard (13 points), Megan Hernandez (12), and Morgan Brye (10) all hitting double figures.

"They threw a lot at us. They switched defenses five times tonight. We saw them kind of go to some junk defenses, triangle and two, box and one, a lot of times you don't see that this early in the year so we had to make some adjustments on the fly and for the most part I thought our kids did a really good job," Brad Johnson said

Farmington led 58-26 after three quarters and coasted to its 19th straight win dating back to last season when the Lady Cardinals finished 32-3 and were declared co-state champions with Star City with the state finals cancelled due to covid-19 restrictions.

"I think overall, we're probably a better basketball shooting team than what we showed tonight, but it's like I told them the beauty of that is, "we walk away feeling like we didn't shoot as good as we could, but we created a lot of points in other ways," Brad Johnson said. "In transition, we got a lot of second-chance points on offensive rebounds. We got several steals that led to easy buckets and we got to the free-throw-line so that's how you combat a night where the ball's not falling from the perimeter like you normally expect and another thing is you go look at the stats, we had four kids in double figures tonight. I think that speaks to the diversity of our basketball team."