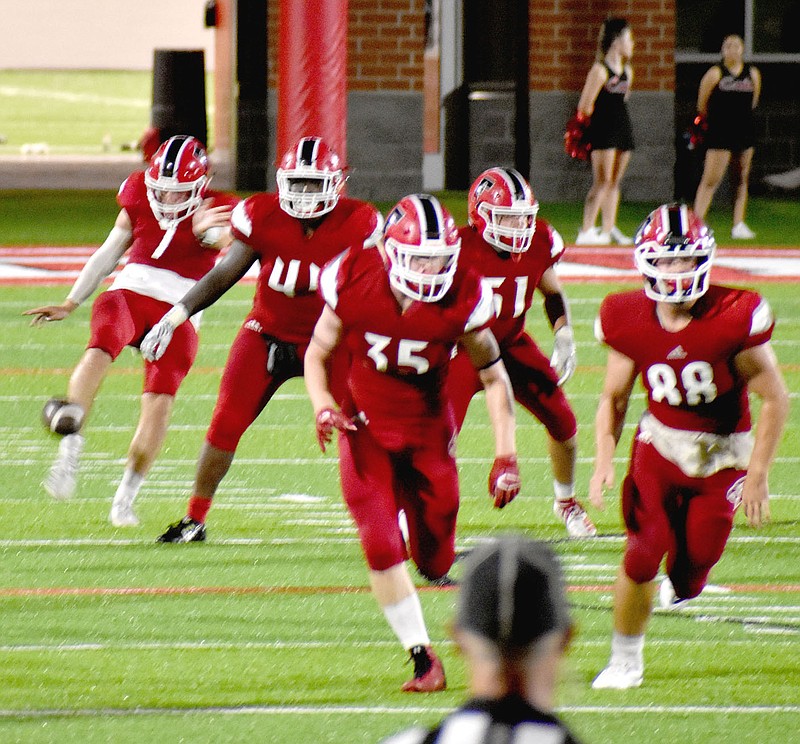 MARK HUMPHREY ENTERPRISE-LEADER/Farmington tight end Chase Brown (No. 35) and linebacker Caleb Matthews (No. 88) take off in punt coverage while Tate Sutton kicks the ball away. Brown recovered a muffed punt by Valley View enabling the Cardinals to drive for a third quarter touchdown during Friday's 28-7 postseason win.

FARMINGTON -- More than one Farmington player redeemed themselves or teammates when given opportunity during a historic, 28-7, Class 5A postseason win at Valley View Friday.

Devonte Donovan, who dropped four passes last week, capitalized when coaches showed confidence in him by catching a 9-yard pass on fourth down to keep a drive alive which put the Cardinals up by two scores, 21-7, with Caden Elsik running for a 1-yard touchdown in the third quarter. Elsik sat out last week's 8-3 loss at Alma due to injury.

In the fourth quarter quarterback Tate Sutton fumbled in the end zone while scrambling trying to convert third-and-nine after a Cardinal goal line stand. Valley View recovered inches from the goal line. Farmington's defense turned in another staunch goal line stand on five downs because a penalty was accepted that moved the ball back to the five and second down repeated.

Farmington recovered a fumble on the fifth down of the series. The Cardinals then drove 98 yards in 11 plays while burning five minutes off the clock to seal the victory.

Farmington head coach Mike Adams described the historic achievement as a great team win for the Cardinals noting all three phases, offense, defense and special teams, came up big and contributed to the victory.

"The defense came up big with three goal line stands -- Valley View had first-and-goal on our four yard line twice, and first-and-goal on our one-yard-line and the defense held then all three times," Adams said. "The offense took the opening kickoff and drove 70 yards to take the early lead. We moved the ball consistently all night long, including a 98-yard drive for the clinching touchdown in the fourth quarter."

Sutton's 2-yard quarterback sneak began the march, which featured a pair of fourth-down conversions by the Cardinals. Valley View jumped offsides with the Cardinals in field goal formation at the 20. That moved the sticks, but Farmington faced another fourth down three plays later at the 16.

Adams called time-out and went for the win by calling a pass, which the offense executed sharply. Sutton threw to tight end Chase Brown across the middle to put the game away.

The touchdown represented a 14-point swing. Instead of closing to within, 21-14, Valley View saw Farmington take a 28-7 lead with the fourth quarter clock down to 52 seconds.

Josiah Ingraham ended a Blazer threat by recovering a fumble in the red zone on the first possession of the third quarter. Valley View got a 55-yard kickoff return to Farmington's 33 and drove to the Cardinal 19 before the turnover.

The Cardinals failed to make a first down and Sutton punted just out of the end zone. Valley View signaled for a fair catch, but muffed the punt and Chase Brown recovered for the Cardinals.

The Cardinals overcame first-and-22 with Sutton passing to Donovan for 9 yards on fourth down to keep the drive alive on their way to expanding their lead to 21-7.

Defensive stops on fourth down set up scoring drives by both teams in the first half. Farmington's offense generated an 11-play, 64-yard drive scoring on the opening possession of the game highlighted by a key third down conversion on Sutton's 11-yard pass to Donovan. Elsik missed the last regular season game, but made his presence known with a 4-yard touchdown carry punching the ball in off left tackle on a counter play. Luis Zavala kicked the P.A.T. and Farmington jumped out to an early 7-0 lead.

The Cardinal defense held Valley View on a fourth down play at Farmington's 29. The Cardinals then turned the ball back over on downs, and Valley View drew even on Carson Winters' 7-yard run and Jose Mendoza's extra-point kick.

Midway through the second quarter Valley View attempted a fake punt, but a pass fell incomplete and the Cardinals took over at the Blazers' 40. That play also led to a 14-point swing in Farmington's favor and became one of the key turning points Adams acknowledged.

"With the score tied in the second quarter, special teams came up big when Hunter Nass picked up on a release for a tackle eligible pass punt fake -- he recognized the release and ran with him forcing an overthrow and the turnover," Adams said.

The Cardinals covered the distance in four plays with Sutton running an option. Defenders committed to him and he pitched to Elsik, who set up his blocks nicely to complete a 12-yard touchdown run giving Farmington a 14-7 halftime advantage.

Jay recovered a Valley View fumble on the last play of the half to halt the Blazers on third down following stops on first and second down inside the Cardinal six.

Adams praised individual outstanding efforts, and noted a strong showing by the 5A West.

"Caden Elsik had another big night rushing for 175 yards and 3 touchdowns, giving him 1,176 for the season. Josiah Ingraham led the defense with 9 tackles, 3 for loss, all of which came in our goal line stand," Adams said.

"Friday night really showed the depth and strength of the 5A West. Seven of our teams played and five won -- the bottom two seeds lost, Pea Ridge lost at Magnolia, and Alma, our eighth seed lost 27-24 at undefeated Texarkana. Going into this week we have six teams still alive, two times more than any other league."

Over the course of his 40-year coaching career Adams' biggest upsets in football playoffs occurred after working through tremendous adversity. He looks for opportunity to do that again on the road at Pulaski Academy in Little Rock Friday. Kickoff is 7 p.m.