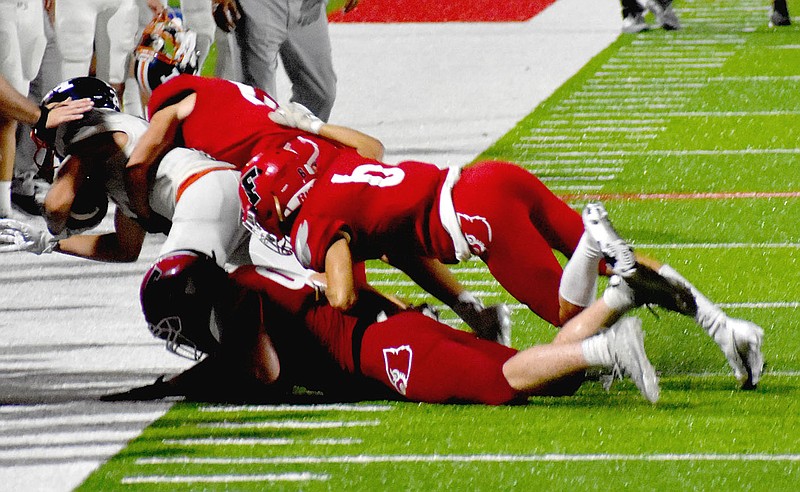 FARMINGTON -- Farmington's 28-7 victory at Valley View Friday signifies the program's first postseason football game in Class 5A and the school's first since a 26-23 win at McGehee on Nov. 25, 2011. The breakthrough win bolsters coach Mike Adams' program, which seemed snakebit after getting bumped up from the 4A Classification after the 2013 season.

The streak goes back 93 games and Friday's win stands out like a miracle recorded among the islands of Malta when after a shipwreck St. Paul washed ashore then was bitten by a viper while laying sticks he had gathered onto a fire.

According to visitmalta.com, the date was around A.D. 60, and St. Paul was being taken to Rome to be tried as a political rebel when the ship carrying him and 275 others was caught in a violent storm -- not unlike Farmington's 2020 football season which saw the Cardinals cancel a home game scheduled for Sept. 25 against 5A West foe, Harrison, due to covid-19 restrictions.

St. Paul's traveling companion, St. Luke, related the feeling of impending doom for those aboard the ship recorded in Acts 27:20, "And when neither sun nor stars in many days appeared, and no small tempest lay on us, all hope that we should be saved was then taken away."

Fascinating parallels between the Cardinal quest for postseason going back to their first season in the 5A classification and St. Paul's journey exist.

Farmington started 2014 with three nonconference wins including a mercy-rule 42-22 defeat of Van Buren then in Class 6A. The Cardinals played their first 5A West Conference game hosting Little Rock Christian at Allen Holland Field on Sept. 26, 2014, and suffering a 42-26 loss complicated by injuries to key personnel, two defensive touchdowns by Little Rock Christian plus a slew of controversial penalties on their home field.

So many freak things went horribly wrong for the Cardinals during that contest that Farmington fans marked it as a beguilement. Each season since the ball didn't bounce Farmington's way when they needed a break.

The next week controversial clock management by referees allowed Greenbrier to run three plays from scrimmage in the last eight seconds of the first half. Two were runs including a quarterback sack, which should have ended the half, but one second was put back on the clock and the Panthers scored to erase a 25-24 Farmington lead. The Cardinals couldn't overcome the bitter sting of that and were blown out in the second half, losing 56-31, sending a once promising season into a deep tailspin.

St. Paul exercised Emergency Management leadership skills relating an angelic vision assuring those with him of their safety but impending loss of the ship. He persuaded the Roman soldiers guarding him to prevent the ship's crew from abandoning the ship and fleeing in a lifeboat which would have spelled doom for the non-sailors left aboard.

He then got everyone to eat something preparing them for the physical exertion of swimming to land, and they all safely reached the Maltese coast as St. Paul predicted.

Farmington football, too, has been a long time trying to kick its way out of a whirlpool.

The Cardinals finished 5-5 overall in 2015, but lost a coin flip conducted over the phone done via conference call without any Farmington coaches present. That left the Cardinals out of the Class 5A playoffs.

An inability to compensate for injuries caused by lack of overall depth competing against larger schools seriously hurt Farmington for the next three seasons, 2016-2018. Farmington lost starting quarterback Tate Sutton to repeated unusual injuries for 2018 and 2019. One 5A West opponent, Morrilton, lost its starting quarterback presumably for the 2018 season, but Division I North Carolina signee, Jacolby Criswell, returned in week nine leading the Devil Dogs to a 52-30 win at Allen Holland Field keeping Farmington out of the playoffs.

Fate doesn't always equal fatality regardless of the consensus. Even first-hand observations can be misleading as St. Paul's story reveals.

St. Luke documented a dramatic incident that turned out contrary to the expectations in Acts 28:1-6 when a viper crawled out to escape the heat and fastened itself to St. Paul's hand.

"And when the barbarians saw the venomous beast hang on his hand, they said among themselves, 'No doubt this man is a murderer, whom, though he hath escaped the sea, yet vengeance suffereth not to live.'" - Acts 28:4

Luke, a physician, described the island natives as barbarians, which Noah Webster's 1828 Dictionary defines as "a man in his rude, savage state; an uncivilized person; or a cruel, savage, brutal man; one destitute of pity or humanity."

Witnessing the snakebite, immediately, they passed judgment expecting St. Paul's hand to swell up and thinking he would drop dead at any moment.

But St. Paul wasn't listening to all the voices around him predicting his demise. He shook the viper off into the fire, felt no harmful effects and the people changed their minds deciding he must be some kind of a god. Those suffering shipwreck were well treated during their stay at Malta.

In 2019 the $16 million Farmington Sports Complex and Cardinal Stadium opened highlighted by a 6-4 season, the first winning record for the program since 2013, but still no playoffs.

This season, Farmington continued to struggle with more adversity and inopportune mistakes at critical junctures, losing 20-14 at Vilonia when they fumbled the ball away after a goal line stand; and a controversial holding call that erased a potential game-winning touchdown at Alma in the last minute plus covid-19 restrictions depriving them of valuable team practice.

Then something happened that could not have been predicted.

That submission to authority led to a breakthrough win on the gridiron two days later.

So, for the Farmington faithful, Friday's jubilant 28-7 postseason win seems equivalent to finally getting a double-handed grip and ripping that monkey off their back then slamming it into a cage.