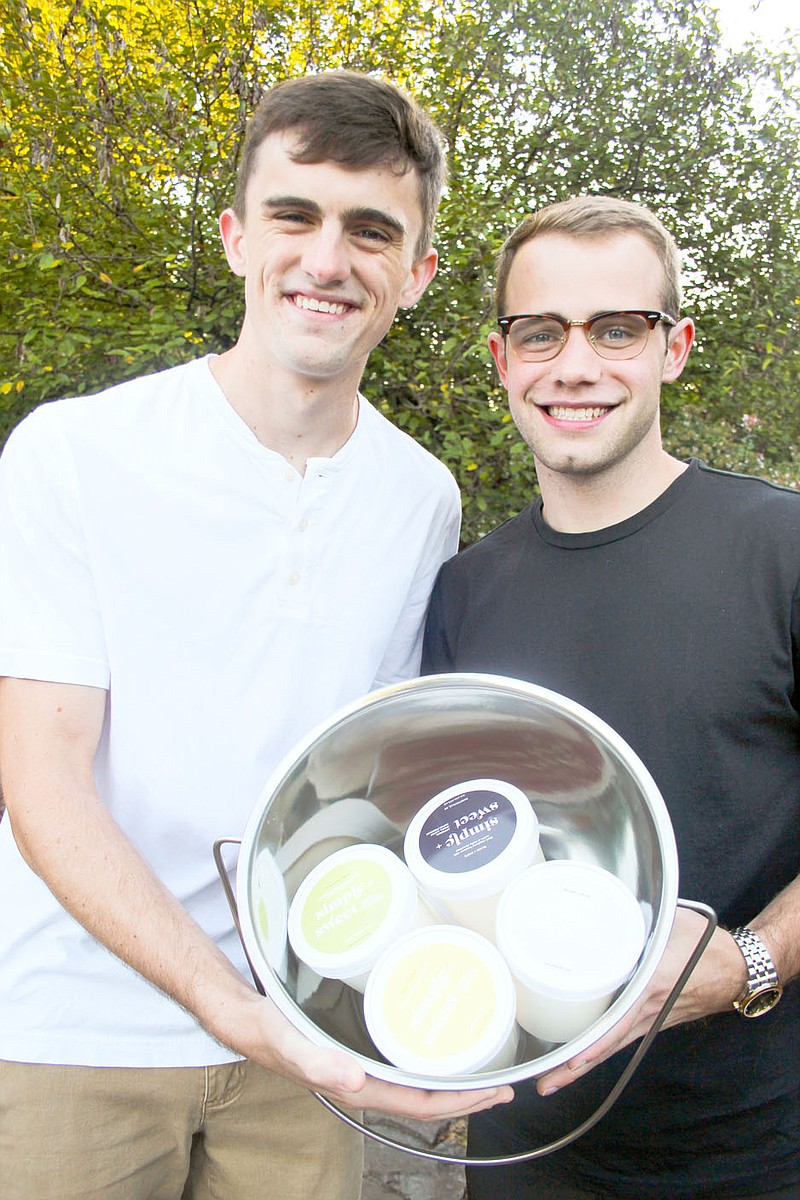 Coleman Warren, a junior at the University of Arkansas, and Tanner Green, who works for a startup business in Bentonville, have joined together to form Simple + Sweet Creamery.

The business will use the kitchen at the former Ledbetter Intermediate School on Double Springs Road to produce small batch ice cream. Ice cream will be sold by the pint and delivered to customers. No one will purchase and pick up products at the school.

Warren said he came up with the idea after spending the summer of 2019 with Americorps Vista in Omaha, Neb. Warren helped with a local food bank to feed children that summer.

"It totally changed my perspective on food insecurity in America," he said.

Warren said he began to understand more about child hunger and realize that not everyone has the same opportunities that he did growing up.

At the same time, he said he found that ice cream in Omaha was much better than what he had tried in Northwest Arkansas.

"In Omaha they had an amazing ice cream that had butter fat in it," Warren said. "I love ice cream and anything like that."

When he returned home, he said he began thinking about something to do for public service and came up with the idea of selling a premium ice cream to raise money to help with food insecurity in Northwest Arkansas.

Green agreed to come on board with the idea.

Warren received approval from Farmington School Board to use the Ledbetter kitchen to manufacture the ice cream. He then approached Farmington Planning Commission with his idea. After some discussion, the commission agreed the best option would be to grant Warren a use on appeal for the business. The use on appeal is granted only to Warren and does not stay with the property.

Warren also has received approval from the Arkansas Department of Health.

Simple + Sweet Creamery will sell pints of ice cream online only through its website, simple-sweet.com.

The difference between Simple + Sweet ice cream and other ice cream, Warren said, is the butter fat.

The price will be $7 per pint, plus a $3 delivery fee, or $20 for three pints of ice cream, delivery fee included.

Warren is hoping customers will order three pints at a time because he wants them to try different flavors.

The newest flavor, he said, is called Honey + Butter.

"You literally cannot find it anywhere else," Warren said.

Honey + Butter has Arkansas honey, butter and honey buns in it.

Some of the other flavors available on the website are Pistachios + Cream, Honey + Lavender, Mint + Chip, Strawberries + Cream, and Black + White, which is black raspberry ice cream with swirls of Kyya white chocolate.

Warren said ingredients for the ice cream will be locally sourced as much as possible.

Warren said the most important part of the business is to sell ice cream to help feed the hungry. For every pint of ice cream sold, $2.50 will go to help with food insecurity, he said.

One goal is to start a summer feeding program for children in the Farmington area. The first public service project will be to assist Farmington School District's food pantry.

"We're going to help them mobilize it. If there needs to be deliveries, we can help with that."

Along with Warren and Green, Bailee King will serve as creative director for the start-up. Their delivery drivers, for now, are siblings and friends.