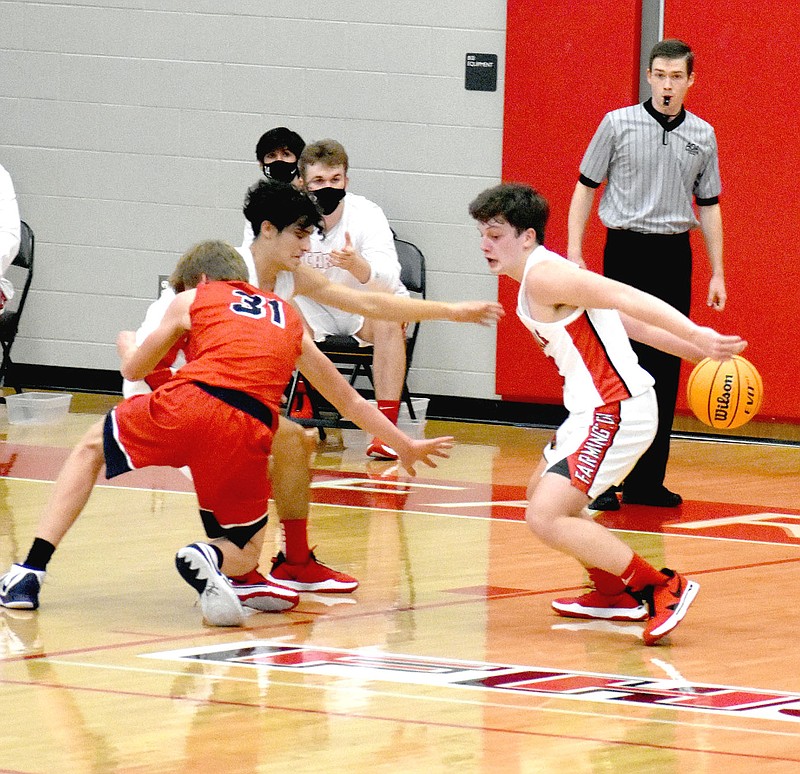 Johnny Taylor's son, freshman guard Layne Taylor, showcased a repertoire of ball-handling and passing skills the Patriots found difficulty defending, but he was far from alone in displaying pizzazz on the basketball court as the Cardinals went full throttle opening up the court.

Logan Burch, son of former Farmington coach turned athletic director, Beau Thompson, showed no effects of an injury which sidelined him for the latter half of the 2019-2020 season. Sam McAlister made 3-of-3 free throws for Providence with 7.8 seconds left in the first quarter after drawing a foul while attempting a 3-pointer, but Burch offset that by draining a deep off-balance trifecta as the horn sounded to end the first quarter with Farmington ahead, 26-13.

Looking a little like former NBA star Jason Kidd, Layne Taylor rifled a pass to Carson Simmons, playing with his back to the basket on the low block. Simmons never bothered to turn around. He simply extended his arm while shielding the ball with his body and made a reverse lay-in.

The Patriots fashioned a 7-2 run to cut Farmington's lead down to 11 with Parker Branscum knocking down a pull-up trey. Burch hit another three for the Cardinals near the 30-second mark, but McAlister drained a pair of free throws reducing Farmington's lead to 39-27 at the half.

Providence 6-6 junior center Corban Mora threw down a two-handed slam in traffic and added a free throw to keep the Patriots within 46-32 with 5:48 remaining in the third quarter, but Farmington didn't allow the visitors to build any momentum off the athletic play although several players were in foul trouble.

Layne Taylor checked in with four fouls and 11.1 seconds left in the quarter. He drove the lane utilizing a 360 spin move to get off a shot which bounced in giving Farmington a 56-41 advantage going into the fourth period.

The Cardinals found Layne Taylor open for a spot-up trifecta as the trailer on a fast-break. Less than 30 seconds later Burch drilled a 3-pointer from the top-of-the-key. Farmington got its lead up to 20 with Simmons laying in a left-handed shot late in the fourth. Providence scored the final three points to account for the final score of 72-53 in favor of the Cardinals.