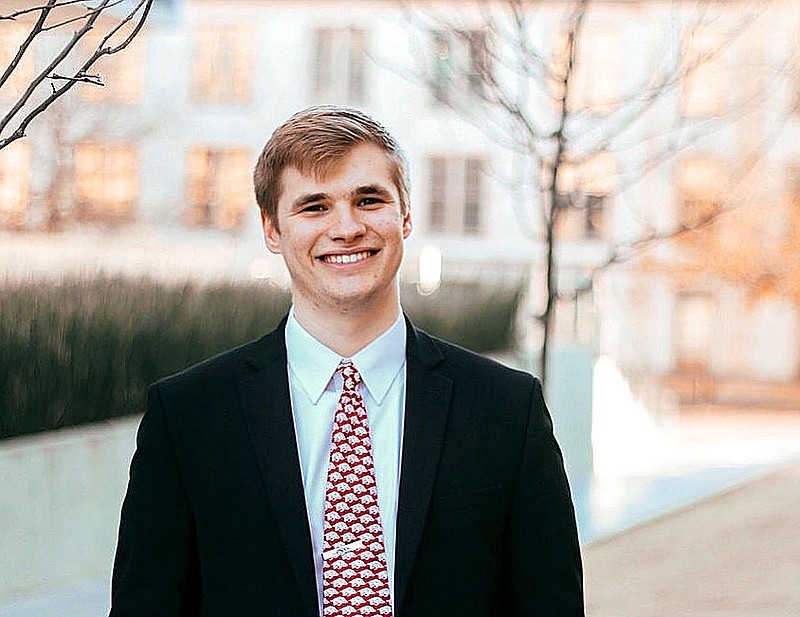 CARMEL, Ind. -- Theta Chi Fraternity is proud to announce Jared A. Pinkerton of Kappa Zeta Chapter at Arkansas as the recipient of the 2020 Reginald E.F. Colley Award. The Colley Award is Theta Chi's most prestigious collegiate honor and annually recognizes distinguished service to alma mater, Fraternity, and community.

Pinkerton is a 2016 graduate of Farmington High School.

Pinkerton was the catalyst in establishing Theta Chi at the University of Arkansas and forged a vision where colony members wanted to establish and be the chapter of leaders at Arkansas who would end drug abuse, sexual assault, and other negative stereotypes in fraternity culture, while working with other Greeks to make a similar positive change. He was elected president and the group grew from 19 to 52 members and was ultimately installed as Kappa Zeta Chapter on Nov. 11, 2017.

After installation, Pinkerton was reelected president and led efforts to execute a major UA event known as "Row," bringing major artists such as Wes Walker and D.J. Baby Drew to campus; partnered with organizations to prevent sexual assault; and worked with the university's conduct office through their "Brotherhood Active Response" (BAR) bystander intervention training. When he realized BAR training was not being utilized by other fraternity members, Pinkerton worked with his vice president of health and safety to bring the BAR training to Kappa Zeta Chapter.

Since 2017, Kappa Zeta Chapter has been recognized by Theta Chi Fraternity in 2017 for having the best collegiate academic performance and in 2019 and 2020 with the Howard R. Alter Jr. Award for Chapter Excellence, the Fraternity's top recognition for chapters.

In 2020, Kappa Zeta Chapter was one of six fraternity chapters to receive the North American Interfraternity Conference's Chapter Award of Distinction which recognizes exceptional fraternity collegiate chapters that demonstrate excellence in operations, involvement in their fraternity/sorority and campus community, and a commitment to a positive fraternity experience.

In 2018 and 2019, Pinkerton was selected as one of the student lobbyists for the Fraternal Government Relations Coalition (FGRC) Congressional Visits where he traveled to Washington, D.C., and met with several U.S. Representatives and Senators on behalf of the greater Greek system.

On campus, Pinkerton was selected for and participated in the University of Arkansas' Freshman Leadership Forum and was later elected president and led efforts for a dodgeball tournament that raised $1,000 for the EOA Children's House. He later served as a staff member, assisting with philanthropic projects and mentoring new students.

He served as an Associated Student Government (ASG) Senator and led several initiatives, including one to have the University's Old Main Oath enshrined on campus. He was later appointed to serve as the Director of Academic Affairs for the ASG Executive Cabinet where he worked with the Vice Provost on reworking a conflicting class withdrawal policy and advocated for the use and implementation of Open Education Resources instead of traditional textbooks to help students with the rising costs of college education.

Pinkerton was elected Student Body president with the campaign slogan "Unity: It's Time To Be Heard." He participated in Model United Nations and traveled to China as part of the university's team where he and his partner competed against 40 other teams in the UN Industrial Development Organization committee and won the day, having their proposals passed. His team was awarded the title of "Distinguished Delegation."

Pinkerton volunteered in his community during numerous trash pickups and river clean-ups, helped to raise awareness for various causes, and assisted at several events around campus. He also participated in Hogs United Games and in Make a Difference Day, including leading cigarette butt clean-ups in downtown Fayetteville during his junior and senior years, collecting 20 pounds each year. In addition, he volunteered at Farmington High School blood drives as a collegian, served as a "Buddy" at a Tim Tebow Foundation Night to Shine event which hosts a prom for those with special needs, and assisted with numerous political campaigns.

A student in the Walton Honors College and the Walton College of Business, Pinkerton earned a 3.902 GPA, made the Dean's List every semester, and was inducted into the Beta Gamma Sigma Honor Society. He received nearly $60,000 in scholarships and grants to support his education including four scholarships from The Foundation Chapter of Theta Chi Fraternity.

Pinkerton was recognized with Theta Chi Fraternity's Resolute Man distinction for demonstrating leadership development, teamwork, social skills, and a commitment to continued support for his university and fraternity. The Arkansas Alumni Association recognized him with the 2020 Senior Honor Citation for exhibiting outstanding academic achievement, leadership skills, and co-curricular activities.

Pinkerton said, "Theta Chi is special because it builds each individual into the best version of themselves...I have had the privilege of doing a lot of wonderful things in college but the most wonderful of them all was building a chapter that will stand the test of time with my best friends."