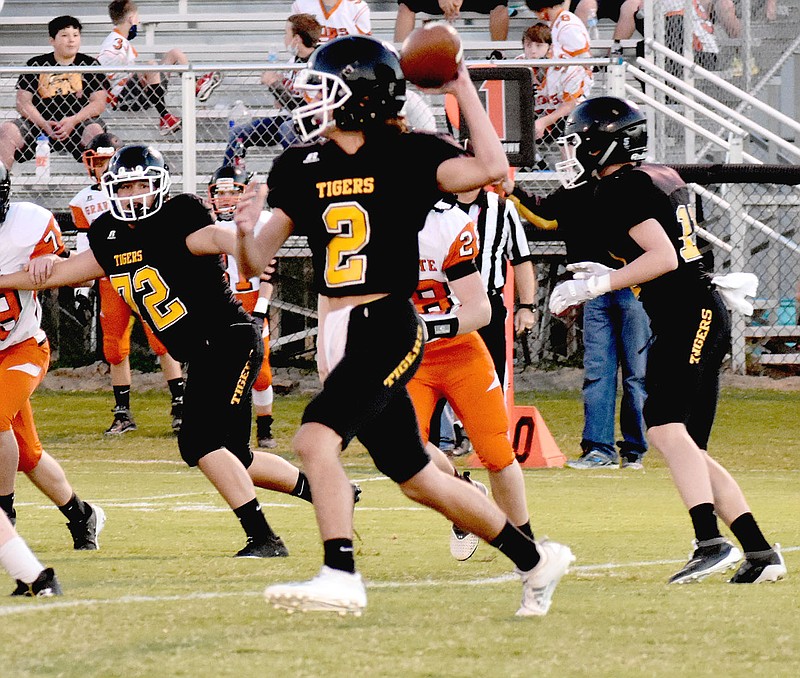 PRAIRIE GROVE -- Thursday's 22-14 junior high football victory by Prairie Grove over Gravette in 4A-1 Conference action might seem insignificant in the grand scheme across life's spectrum, yet illustrates American ideals.

In reality, the contest looms large in importance for players, coaches, parents and fans of both teams as well as their conference brethren because the outcome may bear heavily on what's decided in November.

Both teams are projected this season to contend for a conference championship that likely won't be decided until the first week in November and the race is too early to call at this juncture, but Prairie Grove took a big step towards accomplishing that goal by securing a quality win over a strong opponent that dominated the Tiger freshman class in the past.

"They keep on amazing me, because these ninth graders, they didn't win a game in seventh grade at all," said Prairie Grove head junior high coach John Elder. "They just keep on amazing me, pulling things out. The way they're playing, I'm just really pleased with them right now."

Key mistakes sank Gravette, which hurt its chances with a shanked punt and blown coverage on second-and-25 and personal foul penalty that set up a touchback on a kickoff leading to a scoreless first half by a proficient Lion offense.

The manner in which victory was achieved gives Prairie Grove fans reason to shout.

Prairie Grove won the coin toss and elected to receive which played out as a major factor in determining the course of the gridiron contest. The junior Tigers methodically reached both goals set by Elder on the game's first possession, controlling the clock and scoring.

Quarterback Luke Vance (6-of-7 for 86 yards, 1 touchdown, no interceptions) began the drive with a 15-yard completion to tight end David Stephens, a connection Prairie Grove went to again and again including an 8-yard gain to convert third-and-seven from the Gravette 35 coming out of a time-out.

"David [Stephens] was open a lot and Luke [Vance] found him and they hooked up well tonight," Elder said.

In between Prairie Grove's second and third plays 42 seconds elapsed with another 42 seconds evaporating between the third and fourth plays.

Twice on the opening drive on consecutive plays Elder called time-out after letting the play clock run down to the final two seconds. Coaches generally save their allotted three time-outs per half as long as they can typically employing them late in the half, but Elder and the junior Tigers were very intentional, reducing the number of opportunities Gravette's high-powered offense would get.

"That was big. That was the game plan coming in, just try to keep time of possession our way and our guys did it, just kept grinding it out making four or five yards a pop. They did some good stuff," Elder said.

Prairie Grove burned the entire first quarter and 55 seconds of the second quarter deliberately utilizing 17 plays to march 70 yards before punching the ball into the end zone on Joseph Sims' 3-yard plunge. Sims finished with 74 yards on 19 carries. Along the way the junior Tigers overcame second-and-12, first-and-15, fourth-and-one, plus third-and-16.

Gravette could not stop them in spite of these scenarios thanks to the determined running of Sims and good blocking. The conversion didn't work out and Prairie Grove settled for a 6-0 lead, but Elder didn't let them dwell on that momentary setback.

"That's OK, good job, good job," Elder patted as many players on the helmet and shoulder pads as he could reach when the offense came off the field.

Gravette received the ensuing kickoff and ran seven plays before being forced to punt. The kick veered laterally off the side of the punter's foot, traveling a mere 11 yards. The Lions soon rued giving Prairie Grove starting field position at its own 41 with 3:30 remaining in the first half.

This time Prairie Grove didn't burn as much clock because Elder wanted another touchdown. The junior Tigers epitomized America's fighting spirit and beat the odds even after back-t0-back false start penalties and a dropped lateral pass from Vance to runningback Conner Hubbs that put the junior Tigers facing second-and-25 from the Gravette 38.

Hoping they might get the ball back in time to score, Gravette called time-out but were unprepared and scrambling to adjust when Prairie Grove lined up in a Swinging-Gate formation. The junior Tigers weren't aligned properly so to avoid another penalty Elder expended his last time-out at the 1:04 mark.

Hubbs felt his coach's confidence in him to make a play when his number was called and he didn't disappoint, catching a short pass from Vance that the freshman speedster took in for a 38-yard touchdown. The tandem replicated the feat scoring a 2-point conversion pass to boost Prairie Grove's lead up to 14-0, a lead the junior Tigers held at halftime.

"One series we did have some penalties that backed us up, but then they were playing so tight on us that we were able to hit a little quick pass on them and just got behind them for a big touchdown," Elder said.

Prairie Grove dominated time of possession in the first half, holding the ball 11:15 to 4:16 for Gravette. The junior Tigers ran off 27 offensive plays while the Lions had 10 outgaining the visitors 149 to 39 in total offense while racking up nine first downs and limiting Gravette to two.

Gravette showed good energy to start the second half, beginning with Tyler Austin's kickoff return into Prairie Grove territory at the 48. Eight plays later Austin, who carried five times for 38 yards on the drive, scored from 12 yards out. Prairie Grove stopped a running play on the conversion attempt maintaining an 8-point advantage of 14-6.

One more special teams miscue would come back to haunt Gravette when the Lions kickoff went out-of-bounds setting up Prairie Grove with a first-down from its own 35. Vance hit Stephens for six yards, then Sims ran for three more, and Hubbs broke a 56-yard touchdown carry. Vance ran in the 2-point conversion giving Prairie Grove its largest lead of the game at 22-6 with three minutes to go in the third quarter.

Prairie Grove returned the kickoff favor by booting the ball out-of-bounds and Gravette went 65 yards in 10 plays with Austin scoring on a 4-yard run out of a Wildcat formation. He added a 2-point run narrowing the junior Tiger lead to 22-14 with 7:22 showing.

The Lions botched an onside kick which didn't travel 10 yards. With five additional yards marked off on the penalty the junior Tiger offense began at Gravette's 43. Vance converted fourth-and-two on a quarterback sneak with the offensive line pushing the pile forward in a team effort to get the first down. Three plays later Hubbs got nine yards on third-and-seven. The junior Tigers forced Gravette to use two time-outs on defense and never let them touch the ball again.

Vance ran out of the shotgun, gaining four yards on fourth-and-two, then took a knee twice once Gravette used its final time-out.

"Big conversions right there, he's got a choice where he can pass it or run it. He took the run and made it happen," Elder said.

With the win Prairie Grove improved to 3-2 overall and 2-0 in league play.