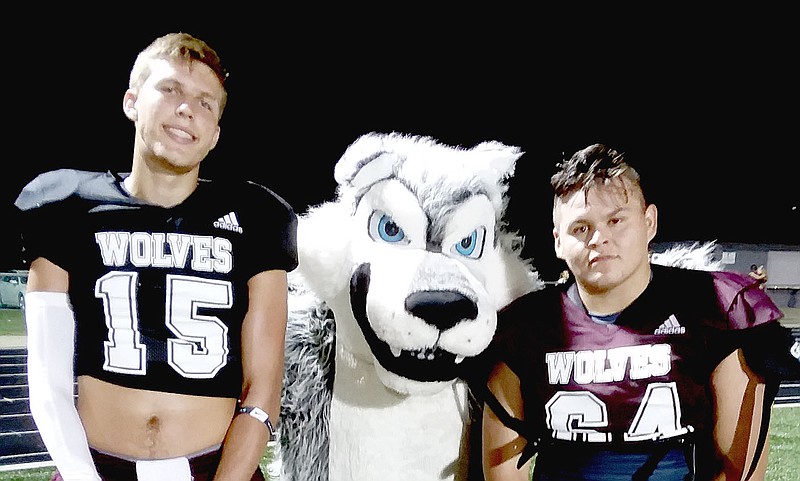 Prologue -- Americans remember these names, Texans, Tejanos, slaves and immigrants -- laying their lives on the line in a battle they knew they couldn't win -- for the cause of freedom.

Their names, revered nearly two centuries later, exemplify gallant examples of men willing to go down fighting for what they believed in.

History records they didn't sacrifice their lives in vain.

The Republic of Texas won its independence and was later annexed as the 28th state on Dec. 29, 1845.

Likewise football fans of Lincoln High School in Northwest Arkansas will do well to remember names of three dozen teenagers contained within the Wolves' 2020 varsity roster.

LINCOLN -- Epitomizing the American spirit, Lincoln stormed back from a poor offensive start with flags flying in their face repeatedly erasing big plays on both sides of the ball.

Despite suffering a disappointing 36-35 conference loss at Greenland Friday night, the Wolves gave their all showing the kind of resolve that made America the greatest nation on the face of the earth.

Lincoln opted out of multiple opportunities to cash in their chips early while Greenland celebrated Homecoming. Lincoln gave them all they wanted before the Pirates won Friday's football contest on a touchdown and 2-point conversion in the final seconds.

Lincoln quarterback Levi Wright started out completing only two of his first 10 passes with an interception, one of two picks he threw in the first half, but gamely brought the Wolves back after Lincoln fell behind 14-0.

A few breakdowns defensively cost Lincoln, which was flagged 18 times for 139 yards in penalties, resulting in even more of a home field advantage for Greenland. Lincoln went three-and-out on its first possession then watched 21 yards marked off on penalties on its second series with Wright throwing an interception on third-and-29.

The Pirates couldn't capitalize throughout the first quarter, however, which ended in a scoreless deadlock -- thanks to stalwart Lincoln defenders such as Kris Martinez, Bryce Swinford, Noah Moore, Daytin Davis and many more.

A controversial call went against Lincoln for offensive pass interference putting the Wolves in second-and-21 and leading to a punt on their third possession.

Midway through the second quarter, Greenland runningback Jett Dennis broke through the Wolves' defense for a 59-yard touchdown run two plays after Lincoln lost the ball on a fumble. Shortly after that, Lincoln drew yet another flag which was declined with a second Pirate interception and Greenland mounted a 72-yard, 11-play drive capped by Gabe Wilson's 12-yard touchdown pass to Tucker Meadors taking a 14-0 lead.

The Wolves refused to roll over and quit. During its next series, Lincoln overcame fourth-and-seven with Wright hitting Rafael Regalado, who had to come back for the ball then fought for first down yardage. After another flag and a sack Lincoln faced fourth-and-20 but Wright came up huge.

An unblocked blitzer came off the right edge momentarily wrapping his arms around the Lincoln quarterback. Wright stepped up in the pocket avoiding a sack by rolling the man off as he pivoted in a 360 degree motion, then turned and threw sharply downfield to Tyler Brewer, who out-leaped a defensive back and shielded the ball with his body to make a 33-yard reception in the end zone as time expired in the first half.

A 2-point run failed, yet Lincoln was on the scoreboard at last trailing 14-6 at halftime.

The deficit increased to 21-6 when Dennis squeezed through a hole off left tackle and ran 18 yards for a touchdown at the 9:09 mark of the third quarter.

Lincoln senior Audie Ramsey, who scored his first career touchdown two weeks prior, returned an onside kick 13 yards into Pirate territory by fighting off tackles at his own 49 and gaining an extra four yards on sheer effort. On second down, Ramsey alertly recovered a fumbled snap, but that miscue bogged down the drive and Lincoln couldn't take advantage of good field position at the Pirates' 48.

Following an exchange of punts, Lincoln took over at Greenland's 42. Wright shook off consecutive incompletions by finding Regalado for a touchdown, then threw for a 2-point conversion drawing the Wolves within 21-14.

Later in the third period Wright led the offense on a game-tying 54-yard, 12-play scoring drive hindered by more penalties. He beat a fourth-and-four situation by passing to Regalado for 12 yards and culminated the march with an 8-yard keeper around right end with the Wolves scoring on the last play of the third quarter. The extra-point kick made the score even at 21-all.

A controversial dead ball personal foul became the first of two 15-yard penalties aiding Greenland's 63-yard drive to answer with the ball advancing on the first play of the series before the snap due to penalty. Wilson snuck in from the one and Greenland added the P.A.T. kick to go back in front, 28-21.

Wright completed a 23-yard pass to Weston Massey at the Pirate 17, but that was waved off by a holding call. Still, Lincoln kept the drive alive even without an effective running game. Wright plunged over from the two, but the Wolves couldn't convert on a running play and found themselves down a point, 28-27, with 3:26 to go.

The Wolves got a big break when Wilson fumbled the ball while running backwards trying to avoid a sack and the Pirates lost 43 yards of field position with Lincoln recovering at Greenland's two.

Lincoln surged ahead 35-27 on Wright's 1-yard touchdown run followed by his 2-point conversion pass to Massey, who wore a walking boot with his leg in a cast only three weeks ago, with the fourth quarter clock down to 1:12, but that proved to be too much time remaining.

Greenland answered by driving 65 yards on four straight pass plays. Half of that yardage came on Wilson's 33-yard touchdown pass to Gilbert in the final seconds. Greenland opted to go for two instead of kicking an extra-point that would have tied the game and potentially sent it into overtime.

Wilson ran wide, then squeezed his way down the right sideline and dove just barely scoring the 2-point conversion giving Greenland (4-2, 2-1) an important 3A-1 Conference win over Lincoln (3-3, 1-1).

The Wolves displayed a lot of heart and determination in fighting to get back in the game after being down 21-6.