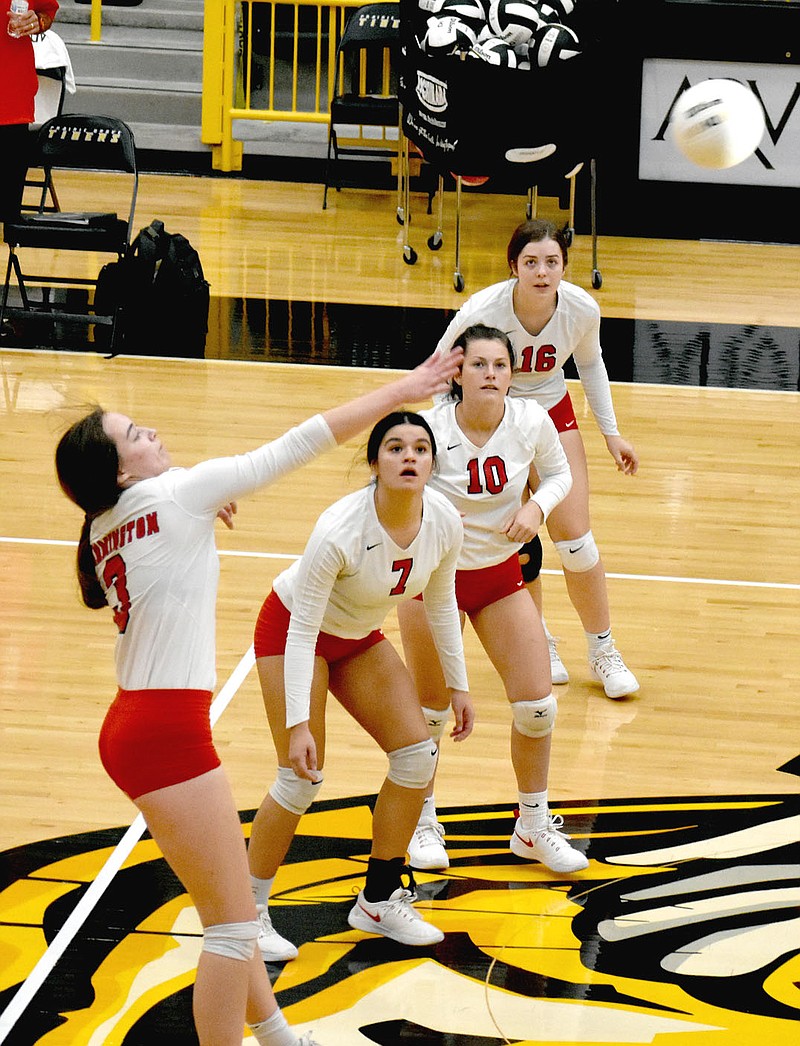 MARK HUMPHREY ENTERPRISE-LEADER/Farmington junior Morgan Brye makes a play on the ball during the Lady Cardinals' conference win (25-10, 25-23, 25-21) over Prairie Grove on Sept. 29.

PRAIRIE GROVE -- Prairie Grove did itself in with mistakes allowing Farmington to overtake the Lady Tigers in game two on the way to a 3-0 sweep Tuesday, Sept. 29.

The Lady Cardinals closed out the second set with an 11-5 run to steal game-two while undoing Prairie Grove's 20-14 lead.

Prairie Grove led only once in the third set, 14-13, courtesy of Kennedy Conrad dishing out a hit Farmington couldn't handle. The Lady Tigers made a little noise late trying to come back from a 22-17 deficit on Brooke Purifoy's ace.

Both coaches saw the second set as decisive.

"I've been waiting for this team to show up regularly. This year we've been hit and miss and the second set was huge for us," said Farmington coach Greg Pair. "So far this year we've been that team that coming out of the gate's not bad most of the time. It's that second set when we get behind. We just kind of let it unravel."

Prairie Grove coach Lindsey Biocic was disappointed in the outcome while noting the team just got two players back from injury. Madison Hutchinson suffered a pulled quad and Abbey Ingram's back bothered her. The inaction caused a little rust according to Biocic, but she noticed something else she aims to correct.

Farmington jumped out to an 11-3 lead in the first set. Prairie Grove interrupted the Lady Cardinals' momentum by scoring the next two points, but Farmington ran the score up to 16-5 when the Lady Tigers took time-out. Kenleigh Elder smashed a kill from the right hitter spot, but Prairie Grove couldn't stem the tide and lost the first set 25-10.

Prairie Grove took an early 2-0 lead in the second set then fell behind 3-2 before Makinsey Parnell set up Conrad's kill.

Farmington fought off big hits by Elder and Conrad, but Prairie Grove kept up the attack and nailed a kill. Conrad served consecutive aces, drawing the Lady Tigers even at 7-7.

Prairie Grove sneaked ahead 11-8 on a series of Farmington miscues.

Farmington's Addison Fenton then pounded a kill from the outside hitter position, but Prairie Grove continued to hang on to the lead 12-10. Sydney Stearman's ace and another Conrad kill put Prairie Grove in front, 15-12. Kelsey Pickett added a kill as the teams traded points.

Again the teams traded points before kills by Taci Vickery and Elder extended the Lady Tiger lead to 20-14.

At that juncture, Jaiden Duffy knocked down an important kill for Farmington followed by a Lady Tiger long hit and a wide hit by Prairie Grove getting the Lady Cardinals back in the match still down 20-17.

Morgan Brye dug out a big hit by Elder in the back row and Farmington rallied to tie the set at 20-all. Vickery's block-kill gave Prairie Grove a 21-20 advantage and a teammate contributed a kill for a 22-21 lead.

Fenton's tip-kill evened the score one more time. Farmington went back in front 23-22 when a Lady Tiger dig went over and out-of-bounds.

Madison Cox spiked a kill from the middle hitter spot posturing Farmington into game-point with a 24-22 lead and the match about to slip away from Prairie Grove.

Elder extended the set with a two-handed push that landed on the back row. The next point was hotly contested with the squads volleying back and forth until Prairie Grove couldn't execute and a third hit failed to clear the net giving Farmington the 25-23 win and a 2-0 lead in the best of five match.

"It's simple, we just did not get the job done tonight. It's on us. Farmington played well and we hope to improve from here on out," Biocic said. "We're kind of knocking off some rust and we hope to be ready for Berryville on Thursday."

Pair also endeavored to iron out some wrinkles. He exhorted the Lady Cardinals in days leading up to the rivalry match to not allow adverse circumstances to dictate their attitude.

"We've been talking a lot the last few days about us together, being ducks, letting it just roll off our back," Pair said. "We're going to have bad things happen and we've got to let that go and respond to the next ball."

"Getting down six or seven [points] in that second set and then the girls fighting back to win that game, I'm proud of them. I'm proud of the fight they had. It wasn't perfect, but it's never going to be perfect."