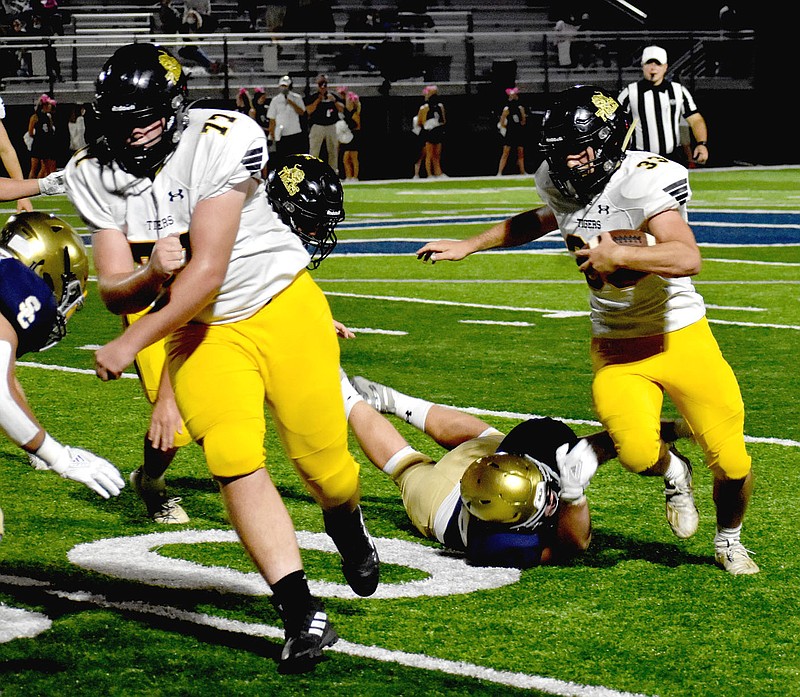 SPRINGDALE -- Prairie Grove got Shiloh Christian out of its passing game, but couldn't stop the run and the Tigers absorbed their first loss of the season, 42-28, at Champions Stadium Friday.

Prairie Grove coach Danny Abshier shouldered the blame for the loss, saying the team performed very well and played their hearts out.

Cam Wiedemann ran for 115 yards and 5 touchdowns on 14 carries, but the real difference-maker for the Saints was sophomore quarterback Eli Wisdom, whose dual threat capabilities set up Wiedemann's big night.

Wisdom went 0-for-2 passing on the Saints' first series, but scrambled for 13 yards to convert second-and-10 posturing Wiedemann's 42-yard touchdown run and setting a trend for the game.

Prairie Grove (5-1, 2-1) responded by marching 54 yards in 8 plays following an onside kick recovery. All of the yards except six came on the ground. Quarterback Knox Laird found Landon Semrad on a quick hitter to bring up a manageable third-and-three. Cade Grant's 4-yard touchdown sweep around left end coupled with Paytin Higgins' PAT kick tied the score at 7-all with 7:34 remaining in the first quarter.

But on this night, the Tigers couldn't keep pace with the Saints' explosive offense although Prairie Grove rallied from 14 points down to tie the game at 28 in the third quarter. The Saints (3-1, 2-0) retook the lead on Wiedemann's 1-yard run with 2:15 in the third. His fifth touchdown, an 8-yard run, came with 6:46 to go in the fourth quarter.

A controversial blindside block call erasing Ethan Miller's first down carry on third-and-10 with the fourth quarter clock stopped at 4:32 because of the flag effectively ended an exciting contest prematurely. With the penalty yardage marked off, Prairie Grove couldn't get out of a third-and-23 situation and punted the ball away with 3:55 showing.

Shiloh scored three times in the first quarter -- all on running plays. Ben Baker got the second Saints touchdown from 3 yards out and Wiedeman the third on a 9-yard run after Wisdom intercepted a Prairie Grove pass on fourth down.

Prairie Grove trailed 21-7 at the end of the first quarter, but narrowed the gap to 28-21 at halftime aided greatly by the powerful running of fullback Foster Layman. Layman gained 39 yards on three carries and the Tigers converted fourth-and-seven with Knox Laird passing to tight end Matthew Velasco for a 27-yard touchdown, reducing the deficit to 21-14.

Prairie Grove appeared to execute an onside kick perfectly with Semrad latching onto the football but officials ruled the Saints didn't get a chance to touch it. The ruling led to Wisdom's 45-yard run followed by Wiedemann's 4-yard rushing touchdown.

A fine kickoff return out to the 35 was waved off by another flag, but Prairie Grove dug in its heels and drove 82 yards in 13 plays with Grant gaining 4 yards on fourth-and-one before Layman crashed in from the 11 to score at the 2:34 mark.

The teams traded scores in the third quarter. Prairie Grove tied the game at 28-28 with a 3-yard run by Grant with 6:09 remaining in the third. Shiloh matched that with a 1-yard run by Wiedemann and the Saints led at the end of the third, 35-28.

Prairie Grove plays host to Huntsville as the Tigers celebrate Homecoming Friday. Kickoff is at 7 p.m. at Tiger Den Stadium.