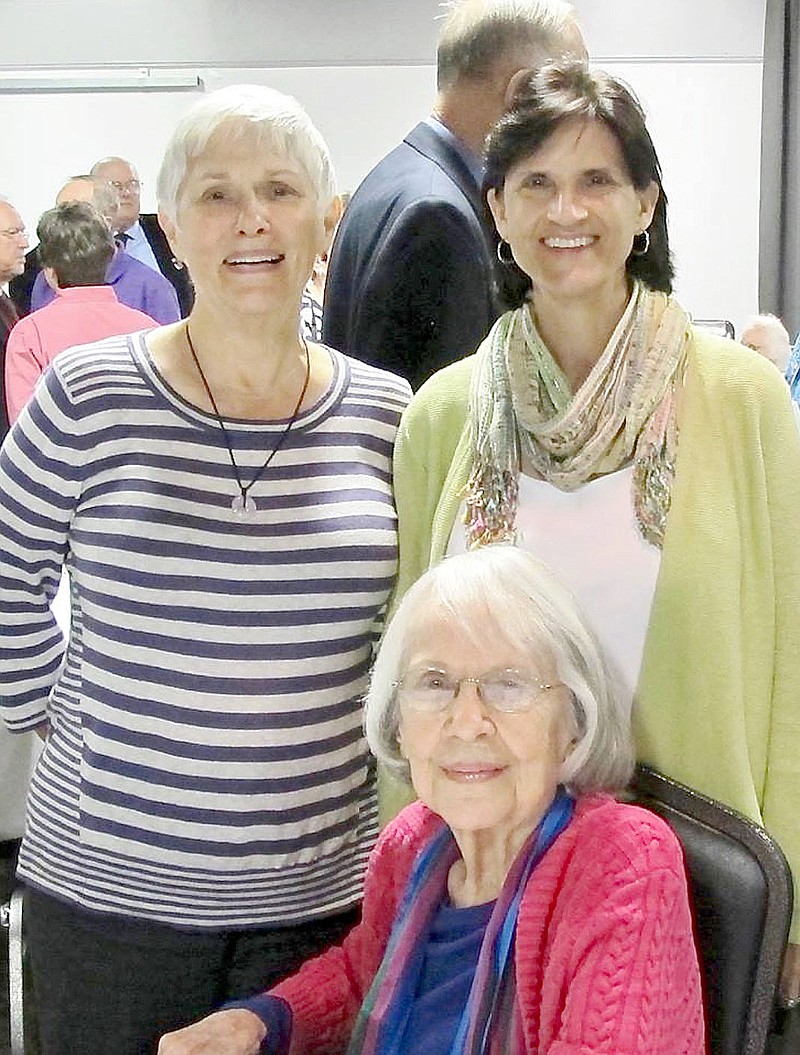 PHOTO COURTESY SUSANN PARKS-SPENCE Susan Parks-Spence, right, stands with Michael Parks Dailey, left, and Janet Parks, who is seated. Dailey and Parks are featured in the book, "At War and on the Homefront," a book of letters and diaries of the Parks family from 1942-1945.

PRAIRIE GROVE — An accident with a period recuperation following a broken leg propelled Susan Parks-Spencer, a local historian, to begin to compile and write a first-class family and local history book.

The broken leg, suffered in 2007, while on a family outing to the Jones Center’s ice rink, may have been the catalyst for Parks-Spencer to finally take up a long-sought history project she wanted to complete.

After another 13 years of writing, editing and researching, she finally had the project in her hands this past May - a finished 409-page book.

“I guess I finally found time to begin that writing project on our family that I was always too busy to begin,” she said recently in a telephone interview. “I’ve been pretty busy and still am raising a family, working and doing things everyone does in life.”

‘At War And On The Home Front’

Her book, “At War and on the Home Front,” in a sharp and medium-sized-print paperback is available online at Amazon or Tuesday-Thursday afternoons from 1:30 to 4:30 p.m. in person at the Washington County Historical Society’s book store, 118 E. Dickson Street, Fayetteville, AR 72701. Or call the historical society at 479-521-2970 for details. Mailing a copy is possible.

The book chronicles the Parks family of Prairie Grove during the years of World War II from 1942-1945.

Inside the book and its letters and diaries are hundreds of local names of people, businesses, politicians and a plethora of activities in the Prairie Grove and nearby communities during the war.

Already an accomplished author and historian, Parks-Spencer allows the writings of the letters and a diary tell their stories, but she does it in a very balanced way, adding in last names and often the full names of businesses that are mentioned casually in these letters.

After each entry in the book, Parks-Spencer added the place the letters were written and the name of the particular Parks sons who were in the war effort.

Local readers will know of the challenge to do this to keep the identical twins – Donald and Barry – as separate individuals, but always as very close twin brothers.

She also details the letters from the other Parks’ sons, James Fay Parks and Joe Parks, with significant footnotes after each letter to keep the reader fluid to place, time and place in the wartime.

The mom and dad of these four grown sons, Jim and Myrtle McCormick Parks, are featured in both letters and a diary of the time. Jim Parks, who was a community leader, election commissioner and civic leader, wrote very few letters, but his wife, Myrtle and mom of the Parks boys, keeps up a heavy correspondence as the clan’s diarist during this time.

Add into the mix, the grandmother to the boys and Myrtle’s mom – Mamie McCormick. She writes often in the book, often with very enduring closures to her letters to grandsons serving in the military and to James Fay, who was stateside running a radio syndication service during this time period.

The book is filled with the intricacies of navigating the complex and often-time confusing labyrinth of military discipline and protocol as both Donald, Joe and Barry try to rise in ranks and also become officers during the conflict.

Readers will also see the personal and family humility, the love for her sons and the love of the grandmother for these grandsons in her encouragement of their service.

The letters reflect back to home, as the boys desire, of course, to be at family events they are missing and even the mundane daily events such as milking the cow, collecting tickets and running the projector down at the Beverly. Topics such as the national rationing of gas, meat, and even shoe leather during the war come up in their correspondence.

In almost every letter home, the family renews its personal and financial commitment to buying War bonds and active participation in rubber and metal scrap drives and leading the local units of the Red Cross in making bandages for the troops.

In writing the book, Parks-Spence recalls her talks with her late father, Barry, about his wartime service, especially his overseas stations in Italy where he flew 21 combat missions over Western Europe.

She recalls how both her dad (Barry) and her uncle Donald would tell the younger kids stories about the war. Often, as young girls, Susan said her sister Karen, would be serenaded by her dad to a version of “Lili Marlene,” a German love song popularly sung by both Allied and German soldiers in this time period.

However in her research after Barry’s death, Parks-Spencer uncovered a touching relationship and friendship her father had never talked about, an Air Force pal named Howell Thompson.

An entire chapter is dedicated to her efforts to find out more about this airman who died in a crash in April of 1944.

Readers of this story and certainly readers of the book itself will not be disappointed in the deep, rich history that has been woven into these letters by the members of the Parks family as they correspond with each other back-and-forth during the war years. The business activities of the Prairie Grove Telephone Company, the family-owned Beverly Theater, the family farm and other assorted businesses – such as their grocery shopping at the Southern Mercantile — are literal gems of history to savor in the reading.

The letters from the Parks brothers, Myrtle Parks and the diary were a family collective, Parks-Spencer said. “Once I started the project, all the family found letters from the time period and they are included,” she said.

Parks-Spencer, while a new author to a book-long work, has published extensively about her hometown, Prairie Grove.

Parks-Spencer has been a board member of the Washington County Historical Society 1995-1997 and again from 2007-2018; first vice-president of membership in 2010-2013; and chaired several committees at WCHS.

The Encyclopedia of Arkansas includes several of her writings, including “Prairie Grove (Washington County); “Prairie Grove Telephone Company”; and has at least one entry in the book, “Prairie Grove, Arkansas Centennial History 1888-1988.”

In 2017, Scott Davis did an oral interview with Susan for the Prairie Grove Oral History Project.

Parks-Spencer’s grandmother, Myrtle McCormick Parks and her father and uncle, Barry and Donald Parks, are all members of the WCHS’s Distinguished Citizens of Washington County Hall of Fame.

This October, Parks-Spencer will join them as she was chosen as Distinguished Citizen for 2020. However, due to the viral pandemic, the 2020 induction ceremonies have been delayed until 2021.

So what is one more delay?

The last delay, that of a broken leg, kick-started a book that will last long in describing the type of life during World War II, one found in Prairie Grove.