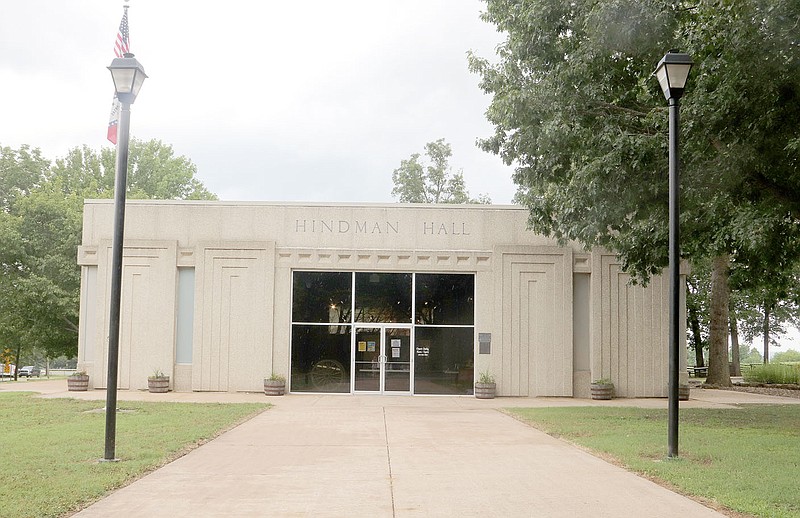 LYNN KUTTER ENTERPRISE-LEADER Hindman Hall Museum at Prairie Grove Battlefield State Park has been nominated to the National Register of Historic Places. The nomination now goes before the National Park Service for a final decision. Arkansas’ success rate for nominations to the national list is more than 98%.

PRAIRIE GROVE — Hindman Hall Museum at Prairie Grove Battlefield State Park may join other historic sites in the community on the National Register of Historic Places.

The State Review Board of Arkansas Historic Preservation Program voted to nominate the building to the National Register of Historic Places at its Aug. 5 meeting in Little Rock, according to Scott Kaufman, director of the state historic preservation program.

Kaufman, in a letter to Stacy Hurst, secretary of the Arkansas Department of Parks, Heritage and Tourism, writes that a listing on the National Register of Historic Places provides recognition and assists in preserving the nation’s heritage.

“Listing of this property provides recognition of the community’s historic importance and assures protective review of the federal projects that might adversely affect the character of the historic property,” Kaufman wrote.

Kaufman said last week that the State Review Board is an independent board with members selected by the governor and his staff.

“They look to see that we have gone through the process correctly,” Kaufman said. “The State Review Board is a check and balance on us.”

The board’s nomination of Hindman Hall Museum will be forwarded to the National Park Service for a final decision. Typically, Kaufman said, it takes about 45 days for a decision to be made.

He expects the National Park Service will agree with the recommendation because the state’s success rate exceeds 98%, he added.

Susan Adkins, superintendent of Prairie Grove Battlefield State Park, last week said the park is honored that the museum has been nominated by the Arkansas Historic Preservation Program for the National Register of Historic Places.

“Built in 1965, the museum is a remarkable example of New Formalist architecture and stands in striking contrast among the 19th-century structures scattered throughout the park. “Hopefully, if confirmed by the National Park Service, Hindman Hall Museum will be recognized nationally for its architectural significance and worthy of preservation for future generations.”

The building was designed in 1963 by Kenneth Cockram, a Fort Smith architect, and was constructed in 1964 by the Monarch Construction Co., of Siloam Springs.

According to the nomination form, Hindman Hall Museum is a “remarkable example” of New Formalist architecture in the western Washington County area of Northwest Arkansas.

The design of the building demonstrates “many of the signature ideas of the New Formalist style of Mid-Century Modern architecture with its symmetrical design, monumental presence, formal landscape, and classicized motifs.”

The museum is being nominated because it is an “excellent example” of the New Formalist style of Mid-Century Modern architecture” in this part of the state.

Hindman Hall Museum contains a visitor’s center and museum for the battlefield state park. It is characterized by its New Formalist style of Modernist architecture, precast concrete exterior and flat roof with a rubber membrane covering.

The nomination form provides a brief history of the Battle of Prairie Grove, a history of Hindman Hall and information about the architect.

Prairie Grove Battlefield State Park had its beginnings on Dec. 7, 1862, when the forces of Confederate General Thomas C. Hindman engaged in a battle with the forces of Union Generals James G. Blunt and F.J. Herron on the site. The engagement resulted in the defeat of Hindman’s forces, which enabled Union forces to control the majority of the Northwest Arkansas area.

Years later in 1908, the local chapter of the United Daughters of the Confederacy purchased nine acres of the battlefield site for the “expressed purpose” of having a designated place for both Union and Confederate veterans to gather for reunions. This was the creation of the state park.

The local chapter of the United Daughters continued to own the grounds and host a reunion held every year in September. Following World War I, the reunions included veterans from that war as well.

Following World War II, the reunions were replaced with the annual Clothesline Fair, which featured some similar activities, along with a local and folk craft section. The fair was open to the public, not just veterans and families.

The United Daughters transferred ownership of the land to a newly created Prairie Grove Battlefield Memorial Foundation on Dec. 7, 1956, the 94th anniversary of the battle. The park was deeded to the state of Arkansas, expanded and received increased funding to allow the purchase of 50 additional acres of adjacent land.

In 1961, the estate of the late Biscoe Hindman, son of General Thomas C. Hindman, endowed the state park with a $100,000 grant to create a memorial for the general at the park. As the collection of Civil War artifacts grew at the park’s museum, the need for additional space became apparent.

By 1963, the Prairie Grove Battlefield Park Commission had decided to use the Hindman grant to construct a new museum and visitor center building and to set it near the entrance of the park to better welcome visitors and provide additional education and interpretation opportunities.

Kenneth Cockram was selected to design the building. Cockram, born Feb. 29, 1920, near the rural English village of Sollihul, immigrated as a child with his family to the United States and settled in Vermont. He served in the U.S. Army Air Corps and in World War II, served in the Pacific Campaign as a navigator and pilot.

After the war, he attended architecture school at Auburn University and then moved to Fort Smith. He opened his own private practice around 1960.

Cockram was credited with the designs of several churches, schools and motels in the area. In Northwest Arkansas, he designed projects that included the 1964 Lincoln Elementary School in Lincoln and the 1972 Tyson Foods headquarters building in Springdale.

Hindman Hall Museum is the only known example of his work in the New Formalist style of Mid-Century Modern architecture. The style was typified by designs with monumental presence, symmetrical facades, flat roofs, formal landscape design and smooth exterior cladding, such as stone or concrete.

Within the context of Prairie Grove, Hindman Hall Museum stands out not just for its new Formalist style but also simply for its “modernity” in general, the nomination form says.

Along with the museum, there are about six other examples of Modernist inspired structures in Prairie Grove, including the 1950 Sharp apartment building on East Graham Street, the 1956 Calvin Bain House by E. Fay Jones, the 1960 Prairie Grove Airlight Outdoor Telephone Booth and the 1965 Phillips 66 service station by Clarence Rinhardt.

“Because modernist architecture is so rare in the small, rural city, the New Formalist design of the Hindman Hall Museum is a significant architectural example in the area,” according to the nhe nomination form.

Hindman Hall Museum was completed in mid-1965, at a cost of $93,000, and dedicated May 23, 1965, before a crowd of about 150 people. The building was declared a monument “not just to the commander of the Confederate forces of the battle, but it was also a monument to all of the forces that fought, especially the 2,465 soldiers who lost their life that day.”

In 1971, then Gov. Dale Bumpers signed legislation to create Prairie Grove Battlefield State Park, allowing for more funding opportunities for the state park. In 1980, the park expanded to 130 acres, and then in the mid-1990s, the park expanded again to its current 840 acres.

Beginning in 2008, the state park began upgrading and renovating the museum in anticipation of the approaching 2012 sesquicentennial commemoration at the park.

“Thanks to the attentive care and diligent maintenance of the Arkansas State Parks staff, the Hindman Hall Museum has served as a ‘suitable memorial’ for the officers and soldiers who fought and died at Prairie Grove so long ago,” the nomination form states.