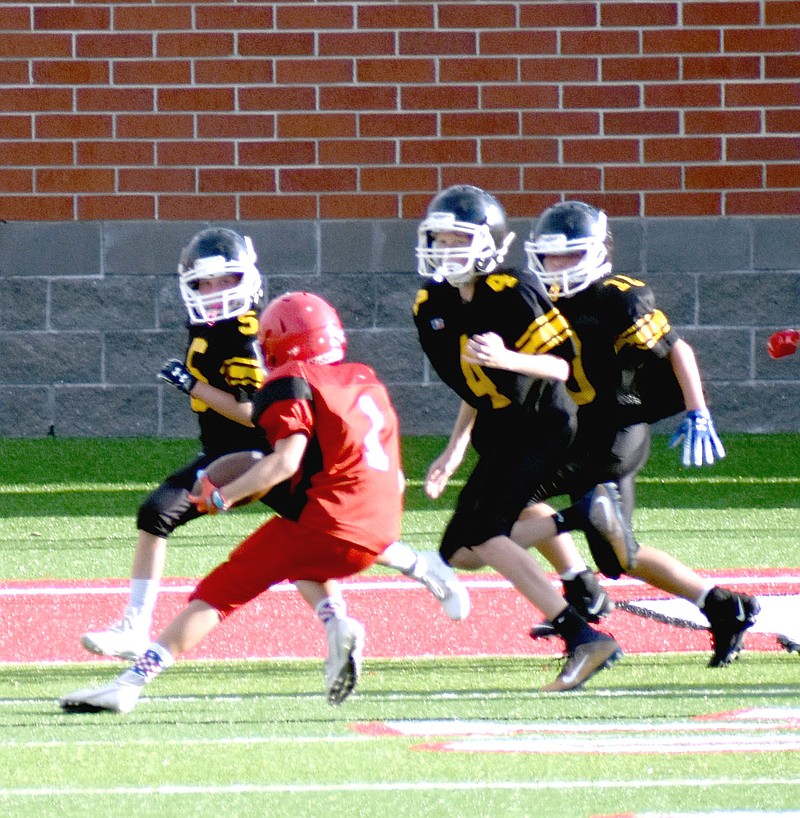 MARK HUMPHREY ENTERPRISE-LEADER/Farmington seventh grade tailback Dawson Keaton stops on a dime causing Prairie Grove defenders to over-run him enabling him to get into the end zone. Keaton scored three touchdowns in the Cardinals' 22-14 seventh grade win at home Thursday.

FARMINGTON -- Farmington won Thursday's seventh grade game at Cardinal Stadium, 22-14, getting a trio of touchdowns from Dawson Keaton to overcome Prairie Grove's 14-8 halftime lead. The Tigers scored on Blake Caudle's 1-yard dash followed by Ethan Richardson's 2-point carry with time expiring in the first half to move in front on the scoreboard.

Farmington dominated the second half putting up 14 unanswered points.

Showing good instincts, Keaton cut inside good blocking by a pair of wide receivers split out on the far left and reeled off a 66-yard jaunt to the house tying the game at 14-14 less than three minutes into the second half. Keaton added the go-ahead score in the form of a determined 2-point run and Farmington would not trail again.

His third touchdown featured another good decision on the fly. Keaton started off right tackle, sensing a wall building he cut back against the grain to his left and outran all the Tiger defenders to the end zone. This time the conversion failed, but Farmington was up 22-14.

Prairie Grove couldn't make a first down on its last possession and the Cardinals ran out the clock.