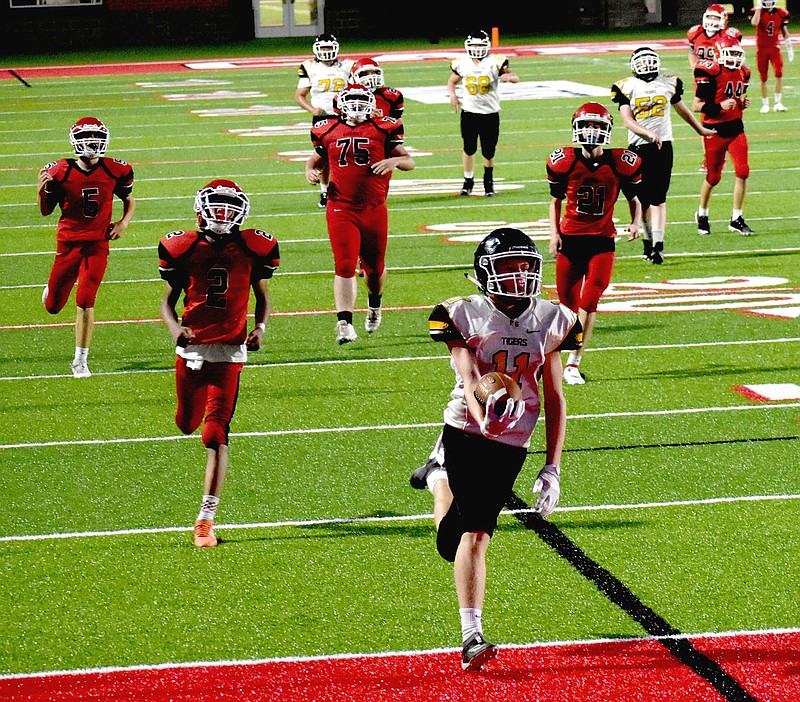 MARK HUMPHREY ENTERPRISE-LEADER/Prairie Grove freshman Conner Hubbs outran all pursuit by Farmington to score a 70-yard rushing touchdown in the third quarter of the junior Tigers' 16-14 victory over Farmington Thursday at Cardinal Arena.

FARMINGTON -- Prairie Grove scored twice over a 31-second span of the third quarter to win their first football game of the season, 16-14, while dropping No. 1 rival Farmington to 0-2.

Heat and humidity didn't stop fans from enjoying Thursday's junior high rivalry football contest decided on the strength of a pair of 2-point conversions and an onside kick recovery that put the junior Tigers in a victory formation to run the clock down to zero.

The first half ended in a scoreless tie with both teams suffering turnovers, but that changed quickly on Brayden Penne's tremendous kickoff return for a touchdown to open the second half for Farmington. Penne went straight up the left side, got outside a solid block and turned on the jets. Nobody caught him, but Prairie Grove foiled a running play preventing a 2-point conversion. Farmington led 6-0, an advantage the junior Cardinals would maintain until the last minute of the third quarter.

Later in the third Farmington squandered a chance to extend its lead turning the ball over on downs in Prairie Grove territory and the junior Tigers exploded with Conner Hubbs breaking off a long run to the other end of the field for a touchdown. Freshman Joseph Sims powered in for a 2-point run and suddenly the junior Cardinals were looking at an 8-6 deficit with 57 seconds left in the third period.

Farmington fumbled the ensuing kickoff and Prairie Grove's kick coverage atoned for its earlier breakdown by pouncing on the pigskin setting up the offense with a first-and-10 from the junior Cardinal 24. On the next play Prairie Grove went for the jugular with quarterback Luke Vance passing to a wide-open Eric Henderson, who caught the ball at the two and stepped across the goal line without being touched.

Sims, the big body at fullback, again banged his way into the end zone tacking on a key 2-point conversion that gave the visiting junior Tigers a 10-point lead of 16-6 with 26 seconds to go in the third which put the junior Cardinals two scores down.

Farmington rallied late in the contest capitalizing on a short field with a 7-play drive to paydirt including a fourth down run by Gabe Burfitt set up by a 9-yard completion from junior Cardinal quarterback Cameron Vanzant to Burfitt on third down. Vanzant followed that up by hitting Ty Bynum for a 28-yard gain to the Prairie Grove four before the junior Tigers could get him down.

Farmington won the seventh grade game at Cardinal Stadium, 22-14, getting a trio of touchdowns from Dawson Keaton to overcome Prairie Grove's 14-8 halftime lead when the Tigers scored on Blake Caudle's 1-yard dash followed by Ethan Richardson's 2-point carry with time expiring in the first half.

Showing good instincts, Keaton cut inside good blocking by a pair of wide receivers split out on the far left and reeled off a 66-yard jaunt to the house tying the game at 14-14 less than three minutes into the second half. Keaton added the go-ahead score in the form of a determined 2-point run and Farmington would not trail again.

His third touchdown featured another good decision on the fly. Keaton started off right tackle, sensing a wall building he cut back against the grain to his left and outran all the Tiger defenders to the end zone. This time the conversion failed, but Farmington was up 22-14.

Prairie Grove couldn't make a first down on its last possession and the Cardinals ran out the clock.