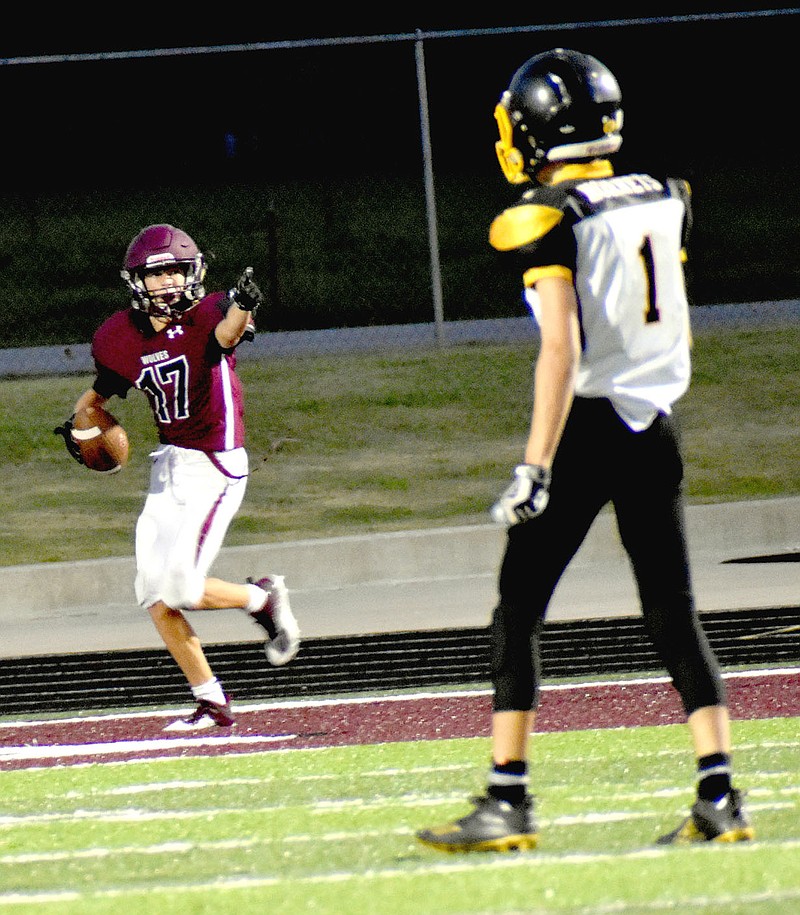 MARK HUMPHREY ENTERPRISE-LEADER/Lincoln freshman Jace Birkes points back at quarterback Drew Moore (not in photo) after catching the a deep touchdown pass in the junior Wolves' 36-16 win over Hackett Thursday at Wolfpack Stadium. The nearest defender on the play is 15 yards away.

LINCOLN -- During a week with no varsity game Lincoln football fans still enjoyed plenty to cheer about witnessing explosive plays by the junior Wolves on both sides of the football.

Quarterback Drew Moore hooked up with wide receiver Jace Birkes on a pair of long touchdown passes plus a 43 yarder to Caden Brewer and an opportunistic Lincoln defense created havoc scoring twice in the last 2:22 of the second quarter as the junior Wolves routed Hackett, 36-16, Thursday at Wolfpack Stadium.

"The boys did a great job all week getting ready to play. We had three turnovers on defense, two interceptions and a strip. We have talked about how important it is to win the turnover battle and take opportunities away from the opponent and that paid off for us on Thursday," said Lincoln head junior high coach Beau Collins.

The junior Wolves are now 4-1 with wins over Hackett, Cedarville, Huntsville, and Westville and one loss to Elkins.

The junior high contest looked early like it might become a shootout but turnovers and ill-timed penalties destroyed Hackett's hopes and offensive potential. Both teams were heavily penalized, however, Lincoln managed to avoid flags on its big plays. Hackett didn't fare as well.

The turning point in the game occurred in the second quarter with Lincoln leading 14-8 and Hackett driving. The junior Wolves were flagged for roughing the passer on a play that brought the Hornets to the Lincoln two with another yard marked off as half-the-distance to the goal on the penalty. Hackett quarterback Cole Ketchum ran the ball in for a touchdown on the next play, but two penalties on the same play including a blindside block and a dead ball unsportsmanlike flag negated the score and pushed Hackett back to the 37.

Birkes intercepted Ketchum inside the 10 on third-and-goal from the 40 and ran the ball out to the Hornets' 42 totally changing the complexion of the game. Hackett never recovered and the junior Wolves pounded away at their pysche.

Three plays later Moore completed his second deep touchdown toss to Birkes and Kale Jones ran in a 2-point conversion giving Lincoln a 22-8 cushion marking the first of 22 unanswered Lincoln points over the last minutes of the first half.

Keller Price scooped up a Hackett fumble and raced 64 yards for another junior Wolf touchdown two plays later. Moore threw to Brewer for the 2-point conversion and Lincoln led 30-8 at the 2:22 mark.

Hackett threw three straight incompletions on its next possession then punted, leaving the junior Wolves about a minute-and-a-half to make something happen. Lincoln tried to engineer its hurry-up offense only to have Moore sacked on fourth-and-23.

Hackett took over on downs at Lincoln's 26, but wasted the opportunity with Birkes swiping a Hornet pass and sprinting 76 yards the other way to score with six seconds remaining in the first half. The conversion failed, but the momentum swing generated a major impact both ways -- igniting the hometown Lincoln fans while demoralizing Hackett which found itself trailing 36-8 at the half.

During a turnover-prone contest, the junior Wolves lost a fumble and turned the ball over on downs in the third. Still, they kept Hackett out of the end zone entering the fourth quarter with their 28-point lead intact.

Hackett, at last found its offense, marching 65 yards in 10 plays to put a touchdown on the board on Ketchum's 20-yard scramble then added a 2-point conversion. Nick Martinez recovered Hackett's onside kick and carried the ball several times empowering Lincoln to run out the clock and secure the 36-16 triumph.

Lincoln started the game with an onside kick that Hackett recovered. The Hornets penetrated Lincoln territory reaching the 28 then coughed up the football on a fumble establishing a trend that would plague them throughout the game.

Varsity football returns to Lincoln this week with the Wolves celebrating Homecoming Friday against West Fork.