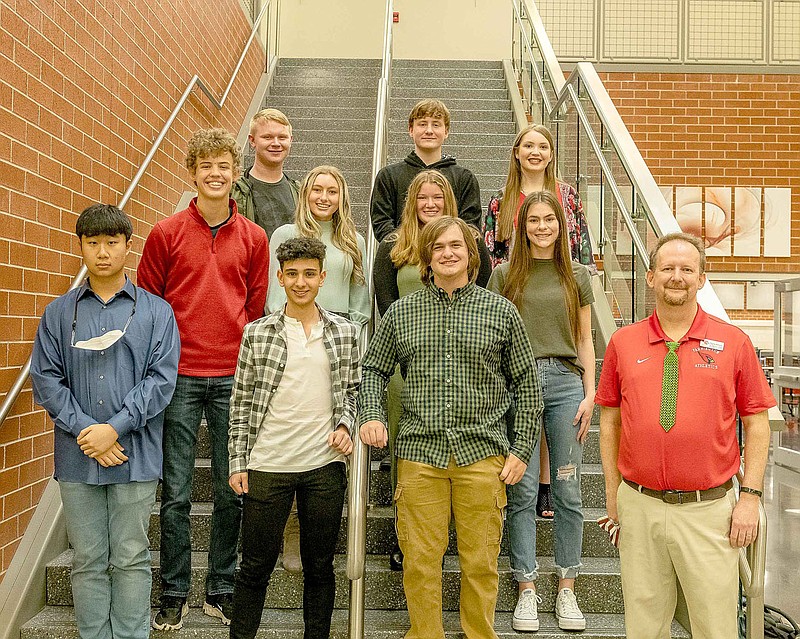 Clayton Williams, team sponsor, also realized a milestone this year. Williams has been the Farmington ACE sponsor for 20 years.

Williams estimates that more than 150 Farmington High students have participated in the ACE program since he took over as faciliator in 2001. Teams usually have 10 members each year, with some students participating for several years while in high school.

Williams followed former high school teacher Tonya McCusition as ACE sponsor. McCusition wanted to concentrate on Quiz Bowl, and Williams said she invited him to watch the championship matches that year at the Jones Center in Springdale. After watching, he said it was something he thought he could do.

Another change this year was that instead of having a championship tournament at the end of the season to determine first place, second place and third place winners, the 2020-21 champion was determined by points accumulated throughout the season.

All schools this year played four matches, with two schools competing in each match. Each team stayed at its own school to compete virtually.

Farmington won the season championship with 172 accumulated points. Bentonville came in second place with 170 points and Bentonville West came in third with 140 points.

Williams said ACE is one of those programs that really takes a team.

An ACE match has two halves, with the first half focusing more on language arts questions and the second half leaning more toward math and science questions. Team members are given specific books and chapters to study in preparation for their matches, and students are assigned their own subjects to study.

Williams said he helps his students with review tests and practices but said he tells them they have to be responsible for their subjects and study on their own.

"You can have great individuals, but at the end of the day, it's a team effort," he said.

"I'm just proud of our kids," Williams said. "I think back over all the years and I'm proud of all the kids who have devoted time and effort to it. We've had athletes, band kids, academic kids. You see them mix and bond and come together for a common cause."

Dustin Seaton, who now coordinates the ACE program for Northwest Arkansas Education Service Cooperative, competed against Williams when he was the ACE coach for Prairie Grove High School.

Williams goes "above and beyond" for his students, Seaton said. "He's competitive for sure but good-natured about it. Which is one of the reasons Farmington's teams are so good."

He noted that Williams is assistant principal at Farmington High but still is engaging with students in an extracurricular activity.

"Having an administrator coaching ACE is rare and unique," Seaton said. "Personally, I would say he's a great advocate for his students."

The 2020-21 ACE season turned out a lot better than expected because last year coaches didn't think they would be able to have a season because of covid-19, Seaton said.

It's possible ACE coaches will decide to keep some of the virtual aspects of this year's season, Seaton said. With virtual games, students did not miss as much class time. Schools did not have bus transportation costs or have to try to schedule auditoriums for the matches.

"We may have a hybird version next year. We'll talk as coaches at some point about it," he said.