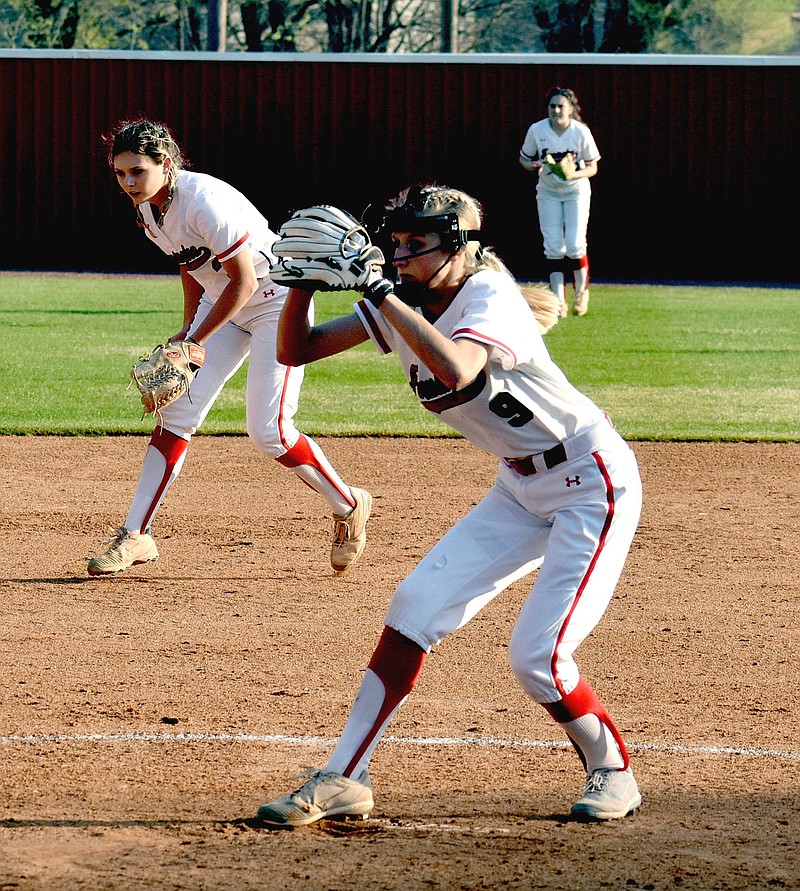 FARMINGTON -- Farmington softball coach Randy Osnes didn't reach 500 wins by not playing an ace when its available or strategically disguising his intentions.

Osnes recycled starting pitcher Carson Griggs with one out in the seventh and the Lady Cardinals clinging to a 9-7 lead over Bentonville West. In making the call, Osnes attributed the outcome as much to input from assistant coach Steve Morgan along with Morgan Clark-Songer.

"Steve's always thinking ahead. They both did a great job coaching-wise tonight," Osnes said.

The final out boiled down to a confrontation between Carson Griggs against Bentonville West senior first baseman Bailey Steele, who represented a potential tying run. Steele swung and missed, then fouled a pitch off to fall behind 0-2.

"We had just adjusted our defense, then we decided to go off-speed. I think it fooled everybody. I'm glad it didn't fool the guy behind the plate," Osnes said.

Steele got caught looking on a called strike three and the game was over.

Carson Griggs had been playing first base and other positions while Osnes tinkered with his pitching staff and rotated reserves into the game during nonconference action. She vacated the chalked circle after giving up a pair of runs in each of the third and fourth innings -- posturing her to possibly absorb a loss trailing 4-0, but those circumstances changed considerably before her second appearance as a pitcher.

"That Sokolsky kid was throwing smoke in the first three innings. I think we had one or two hits off her and that was all. We couldn't get anything going," Osnes said.

The Lady Cardinals, however, played quality defense, highlighted by shortstop Shayley Treat sliding and stopping on a dime just before she would have crashed into her own dugout while making a catch in foul territory to end the fourth that began with Kennedy Griggs pitching for the Lady Cardinals.

Treat's spectacular catch roused appreciation from opposing fans, who applauded her effort, and injected a fresh of infusion into the Lady Cardinals.

Junior Justine Davidson led off the fifth by singling into right field against a West reliever. Freshman Kinley Meek drew a walk as the wind became a factor. Reese Shirey bunted into a fielder's choice with West getting Davidson out at third, but leaving two Farmington runners aboard.

Sophomore Kamryn Uher reached on an error, racing to second as a run scored. Remington Adams sent a triple into the deep right corner, driving in a pair of runs and pulling Farmington within 4-3. Treat got on base and West opted to put catcher Grace Boatright on rather than risk her home run power.

This loaded the bases and Carson Griggs capitalized by smacking a 2-run double that pushed Farmington ahead, 5-4.

Kennedy Griggs struck out, but the ball was dropped and she took off for first, forcing the Wolverines to throw her out, which cost them a run with courtesy runner Madison Erickson scoring from third.

With two outs, Davidson came up to bat for the second time in the inning, smashing a triple and plating Carson Griggs for a 7-4 Farmington advantage. Davidson nearly pulled off an in-the-park home run, but the umpires sent her back to third.

After freshman Isabella Hulsey got beaned, the Lady Wolverines brought in Olivia Nickson to pitch only to have Shirey connect with a 2-2 pitch that found the gap between third and shortstop driving Davidson in. Uher took a wild pitch, allowing the runners to move up, then contributed an RBI single that became a double up the middle for Farmington's ninth run of the inning.

That would be all they'd get and all they needed although more than a few dramatic situations presented themselves in the final innings.

Kennedy Griggs walked the first two batters to start the sixth so Osnes sent Uher into the chalked circle. She induced Mary Beth Dyson to hit into a fielder's choice with the Lady Cardinals getting the lead runner out at third. A passed ball enabled runners to move into scoring position and they both crossed the plate along with Steele, who made it all the way around the horn while Farmington committed two errors on the same play.

The three-run gift narrowed Farmington's lead to 9-7. Next, Uher induced a fly ball that was caught in deep right center for the second out. West loaded the bases with a walk, single and intentional walk, but Uher got Dyson to ground out preserving Farmington's slim 9-7 lead.

Kennedy Griggs sprinted in from right field to make a catch by second base as Uher retired the leadoff batter in the top of the seventh. Nickson hit a line drive to third, but in stopping the ball, the infielder fell down and couldn't make a throw to first on time so with one out and one runner aboard, Osnes summoned Carson Griggs and she stepped up brilliantly -- sort of like Queen Esther rescuing the Jews in ancient Persia from a precarious situation. 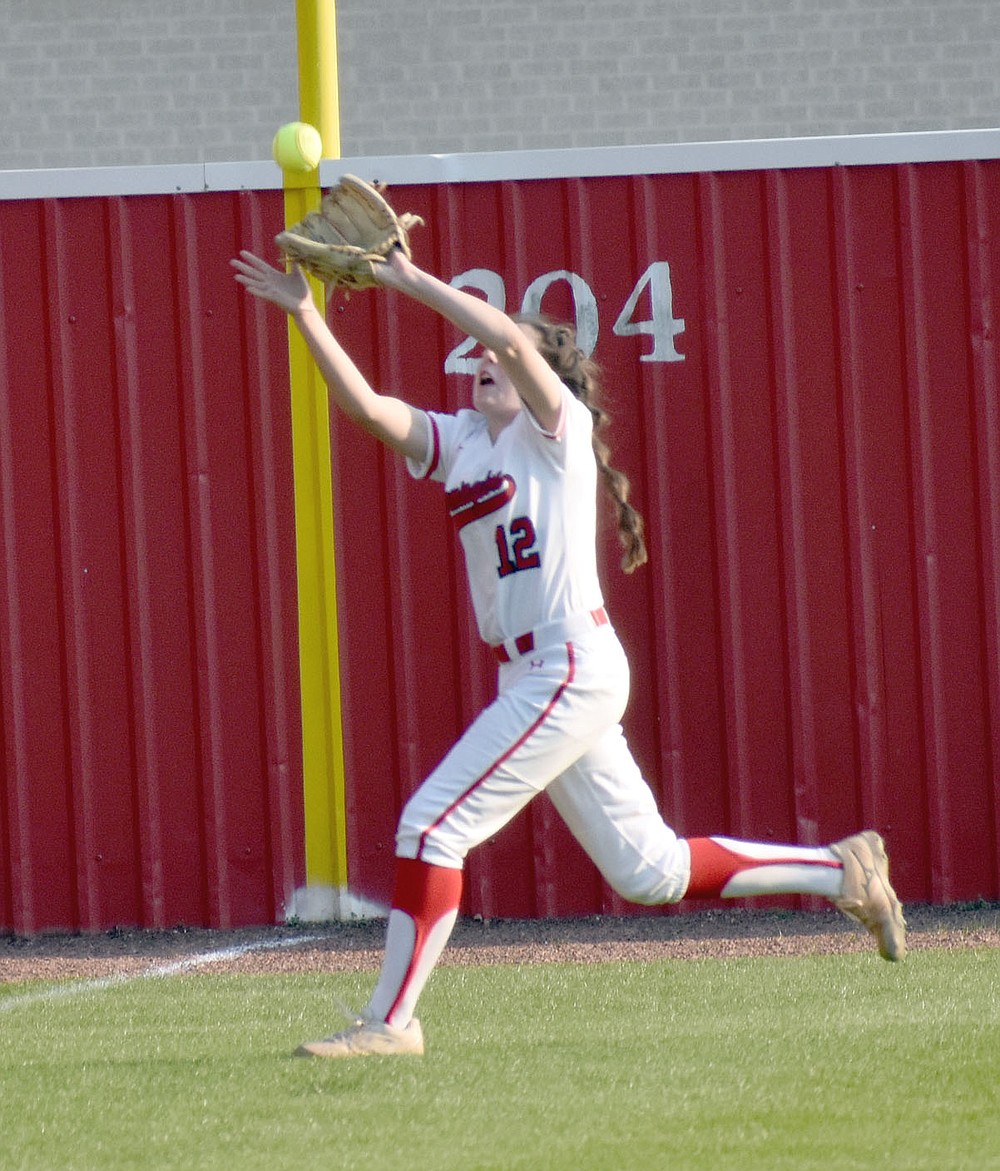