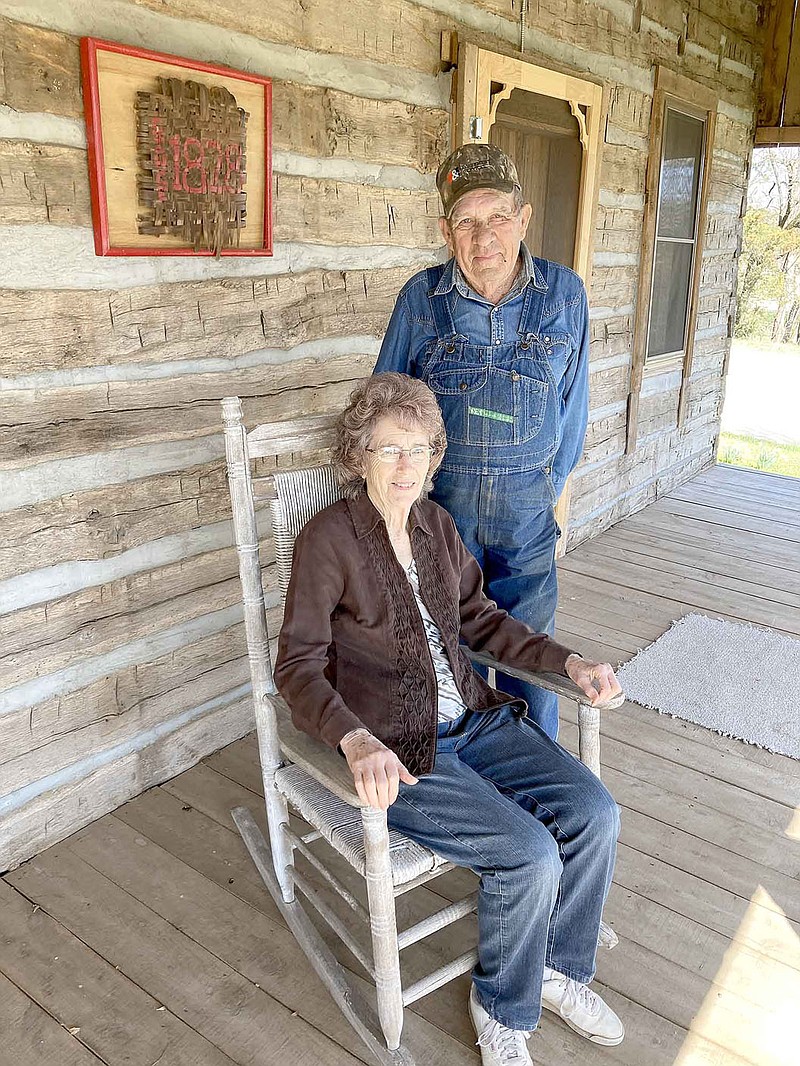 MAYLON RICE SPECIAL TO ENTERPRISE-LEADER Damon and Margaret Reed of Morrow purchased the 1828 family homestead of the Rev. George and Elizabeth Morrow and have restored the historic log cabin. The homestead is now listed on the National Register of Historic Places.

MORROW – During the last 18 months, there has been a flurry of activity around an 1828 historic Morrow family homestead.

Damon and Margaret Reed, who came to purchase the 1828 family homestead of the Rev. George and Elizabeth Morrow in the middle of the southwest Washington County hamlet of the same name, have been very, very busy with some historic results.

While they bought the property a while back, they have finally found the time over the last 18 months to get to work restoring the property.

After purchasing the property, which includes a four-room log cabin, smokehouse, outhouse and watering trough and a small Morrow family cemetery – they have restored the cabin – an 1828 log cabin built by the founder and namesake of Morrow, Arkansas.

"We've been busy, but there was a lot to do," said Margaret Reed, who has taken great care to document by photographs and written descriptions the step-by-step process to transform what was first thought to be a falling down eyesore into a beautiful historic treasure.

Their work has not gone unnoticed, according to Ralph Wilcox, survey coordinator with the Arkansas Heritage. He is in charge of adding properties to both the Arkansas and National Register of Historic Places.

"It was on our radar as a historic site, but nothing like what we found they have done to restore and transform and literally save this state treasure," Wilcox said during a recent telephone call.

The Reeds are the owners of the private property. While the home is restored and livable, they do not plan to live there, lease it out or rent the property.

"We are just glad it is put back where the entire community can be proud of it," said Damon Reed, who has put in lots of elbow grease and shines the property up to a trophy glow.

"I had a little help here and there," Reed said, pointing out various parts of the restoration where neighbors or a little hired help helped to lift or navigate high spots on the walls and frame of the home.

But for the most part, the renovation was done, and done well, by Reed.

Both Reed and Wilcox laugh at the question that is asked on the paperwork for the state and national historic register qualification.

Asked if there was an architect on the job – Reed slowly said, "No, I guess it was all me. I didn't have an architect to tell me what to do, I just wanted to put it back right like it (the house) ought to be."

The Morrow Farmstead is located at 16995 Hale Mountain Road just to the north of the small town of downtown Morrow.

The farmstead consists of the Morrow House, a double-pen log cabin, along with several outbuildings, including a frame smokehouse, frame outhouse, and a concrete-block pump house.

The Morrow House, which was built by George Morrow, consists of two rooms downstairs and two rooms upstairs. Originally it had a fireplace in both downstairs rooms but the one in the west room was removed in the 1950s. Sometime in the early 1900s, siding was added to the log house.

For the outbuildings, the frame smokehouse and frame outhouse may have been built by the WPA during the 1930s.

The farmstead also includes a fieldstone well with concrete water trough, a separate concrete cattle trough, and the Morrow family cemetery, a small cemetery of less than ten graves surrounded by an iron fence.

According to the documentation for the state and national register, "The outbuildings at the site represent the types of features that would have been found on a typical nineteenth and twentieth century farmstead."

The smokehouse, outhouse, well house and cattle trough are all non-contributing to the main house's inclusion on the state and national registers of historic places, Wilcox said.

According to the documentation for the historical register, the Morrow Farmstead has enough integrity from the time of its period of significance to be eligible for listing on the National Register. The largest changes to the property have occurred to the Morrow House itself. Over the years, the house was sided with wood weatherboard siding, and had additions added on the south side.

In addition, the windows were replaced and the western chimney and fireplace were removed. Once the house was purchased by the current owners in 2014, they removed the additions and the siding, and restored the house to its original log double-pen design. However, the western fireplace and chimney were not replaced.

The other buildings on the farm date to the late nineteenth or twentieth century and were all built by the Morrow family. Although they do not date from the period of significance, they are indicative of the types of outbuildings that would have existed on the property in the first part of the 19th century.

The setting around the Morrow Farmstead also retains its rural setting, and it reflects the setting that would have existed during the nineteenth and twentieth centuries when it was occupied by the Morrow family.