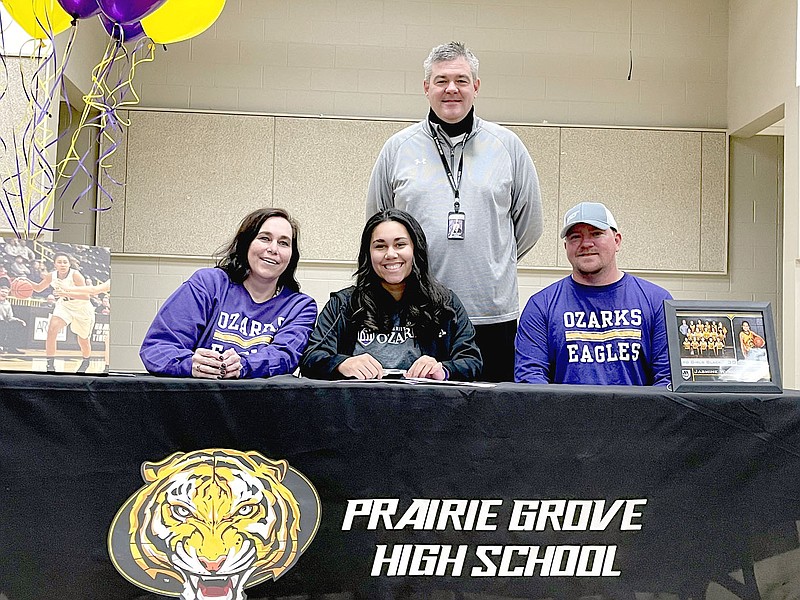 PRAIRIE GROVE --When injuries forced Jasmine Wynos to miss her senior season of basketball, she didn't allow that to cloud her future even as teenagers felt their world turn upside down.

Accompanied by her parents, Jesse and Aime Tackett, and Prairie Grove girls basketball coach Kevin Froud, Wynos signed a national letter of intent to play women's college basketball at University of the Ozarks at Clarksville on March 5. The event signified a personal triumph over adversity, not only for Wynos and her family, but extending out through the Prairie Grove girls basketball program and school into the community beleaguered by a host of covid sanctions that canceled all spring sports in 2020 and postponed last year's graduation deep into the summer.

"Oh yeah, she's a [prospect]. She had a bad senior year hurting her knee, and it goes along with the covid and the 2020, but she has an excellent character and an excellent work ethic and the coaches at the University of the Ozarks saw what she had done and were real pleased with her and never gave up on her," Froud said. "[They] saw how hard she was working and just the type of character person she is got her that position, got her that opportunity to play."

Wynos and her class endured the effects of social distancing imposed when Governor Asa Hutchinson closed public schools to on-site instruction a year ago, forcing students to finish out the 2019-2020 school year using virtual instruction by accessing lessons online.

In the midst of this emotional upheaval for teens accustomed to congregating in school halls and lunchrooms, Wynos was selected as Student of the Week on April 17, 2020, along with junior high student Jackson McCratic. School Resource Officers David Faulk and Travis Sills made the announcement on a Facebook post.

According to Stills, junior high SRO, quite a few names were submitted for consideration that week, so, in an exception to the normal practice of picking a single winner, according to Faulk, high school SRO, a decision was made to honor both students.

"In this case, we have an advisory board that comes in and picks those winners because me and Travis actually get to see the actual Google docs and we know the names and so that way there is no bias in there," Faulk stated in a Facebook video announcing the decision.

He explained the award is arrived at by removing student names, eliminating the identity factor from the review board made up of four persons who examine the merits of each nomination for Student of the Week.

"We scratch out names, that way the people who read it actually only read the accolades which the parents send in," Faulk said.

"The beauty of this is we know you guys are helping your parents, you're helping the community and that is a wonderful thing. That's probably the reason why we wanted to do this ... You two have done great stuff with the community."

Wynos missed the early portion of her junior season with a broken hand and looked forward to what she thought would be a chance to play a full season as a senior. Then came a rash of injuries to the Lady Tiger varsity and by the season-opener Wynos was among five girls including: Mariah Halbert, Logan Meadors, Abby Preston, and Alex Torres, unavailable for the 2020-2021 campaign.

In spite of the setback, Ozarks' coaches maintained an ongoing dialogue as Wynos underwent a rehab process. Lady Eagles coaches texted both Wynos and her mother, keeping tabs on her progress and communicating virtually every week.

The university spelled out the potential they sensed in Wynos, encouraging her as she made a comeback, according to Froud.

"[The university] just wanted them to know they were interested and they still wanted her to come down there and play and they knew what she could do when she got healthy and all that so they kept in contact with her."

Wynos broke into the starting lineup as a freshman, playing three seasons of varsity for the Lady Tigers. She appeared in a total of 71 games averaging 6.7 points, 5.9 rebounds, 1.2 assists and just under one steal per game. Wynos poses a threat to drive with either hand and frequently pushed the ball into the front court after clearing a defensive rebound during her career at Prairie Grove.