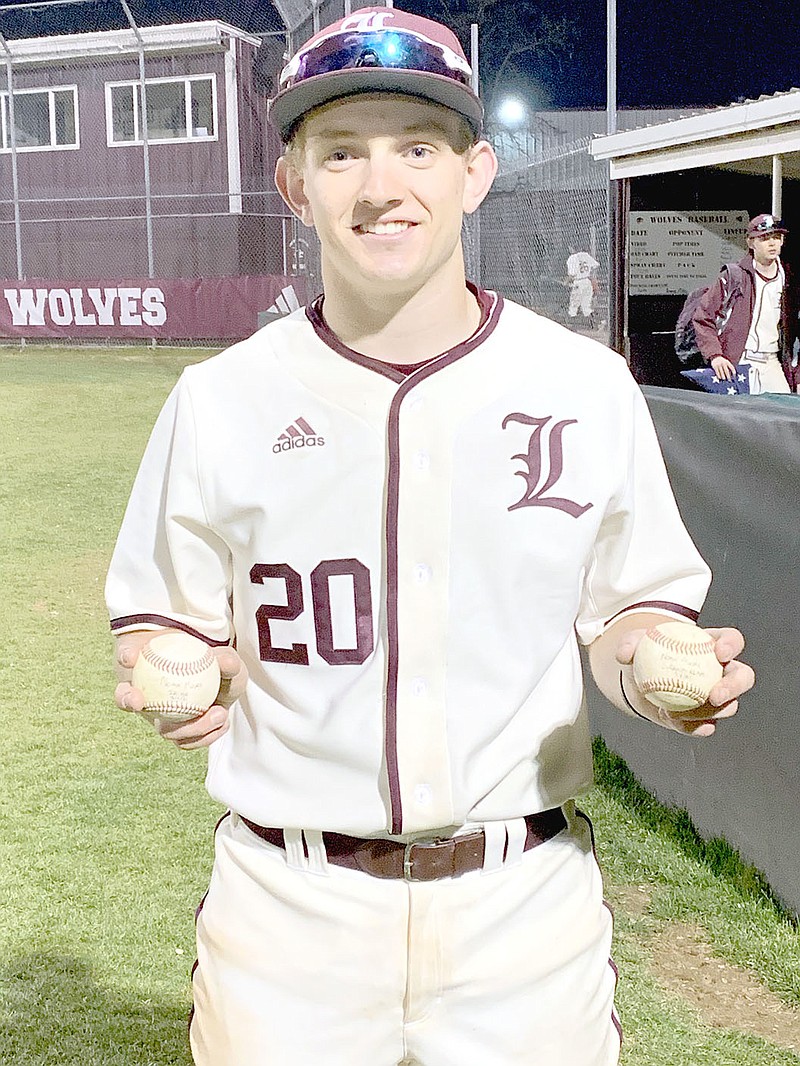 Submitted Photo/Lincoln senior Noah Moore belted a grand-slam, one of two home runs he blasted to lead the Wolves’ baseball team past Greenland, 12-2, in game one of a double-header on Monday, March 8. Lincoln also won game two, 13-5, to complete a sweep.

First-year Lincoln head coach J. Keith shook the dust off a season-opening, 11-1, loss to Gentry on Monday, March 1, preferring to concentrate on a rematch at Gentry three days later.

"The cool thing about this and we played this first game is we play these guys again on Thursday so we get to see immediate [progress evaluation] so that's a fun thing we get to do and hopefully we get to make some adjustments and play better ball," Keith said.

The Wolves did play better. Although they again lost to the Pioneers (9-7), the game played out a lot more competitive which was exactly what Keith hoped for. In the March 1 game, Lincoln's starting pitcher struggled mightily out of the gate, loading the bases, then hitting a batter, walking two more runs across and falling behind 2-0 against Gentry's 8-hole hitter before he was yanked. After falling behind 6-0 in the top of the first inning, Keith got decent mileage out of his bullpen in the 11-1 drubbing.

"Any time you get beat like that it's hard to find some positives, but we've got some young guys that came in. Kase Ingram came in, shut it down for us, kept us in the game, went two innings. Drew Moore came in and just continues to be a really, really bright future [prospect] as a freshman going in there and not giving up any runs in one inning so there were some bright spots on the mound," Keith said.

The Wolves have yet to face traditional 3A-1 baseball powers Elkins and West Fork, yet accumulated double-header sweeps over conference rivals Greenland on March 8 and Valley Springs (14-0, 12-0) on March 29, both teams Keith thought might pose challenges. Lincoln also owns a sweep of Green Forest (10-0, 12-2) on March 15.

Lincoln bombed Greenland twice, winning 12-2 and 13-5 in a double-header at home on Monday, March 8.

"It was a huge conference opener for the Wolves with two big wins," Keith said.

The Wolves won by run-rule in the first game of the double-header.

"Noah Moore led the way in game one with two home runs, ending the game with a grand slam," Keith said. "Kase Ingram owned the pump for the Wolves in game two, with 10 strike-outs and zero walks."

The Wolves didn't return a lot of upper classmen this season, but benefit from an infusion of what Keith describes as "a massive freshman class" with 15 ninth-graders including Ingram finding ways to contribute.

Wright splits time between the pitcher's mound and playing center field. Wright threw 83 mph early in the spring and Keith thinks he can only improve if he stays healthy while counting on the 6-5 right-hander to bring poise to the mound.

"Whenever you get guys like that, put them on the mound and they're calm up there," Keith said.

Noah Moore anchors the Wolves' defense while playing catcher. He fills the 4-hole spot in the batting lineup and impressed the coach with his character.

"He's a kid you wish your daughter could date. Noah's the definition of a servant-leader," Keith said.

Webb plays shortstop and bats in the 6-hole slot.

"He's a baseball guy through and through," Keith said. "As his bat goes, we go. He will take us offensively to the next level. He's a special kid at the bat."

"He wants to compete at everything they do," Keith said. "He's a little cat, but you don't want to find him in a back alley."

Endacott mans first base and poses a threat in the batter's box, whom Keith hopes will continue to improve as the season goes along.

"He will lockdown first base for us and scoop up everything like a Hoover vacuum cleaner," Keith said.

Bowen, another good athlete who plays quarterback in football, plays third and outfield wreaks with potential.

"If he holds out and will let the game come to him some, he'll be special," Keith said.

The Regional tournament will be played May 6-8 at Harrison hosted by Valley Springs with state scheduled for May 13-15 at Ashdown.