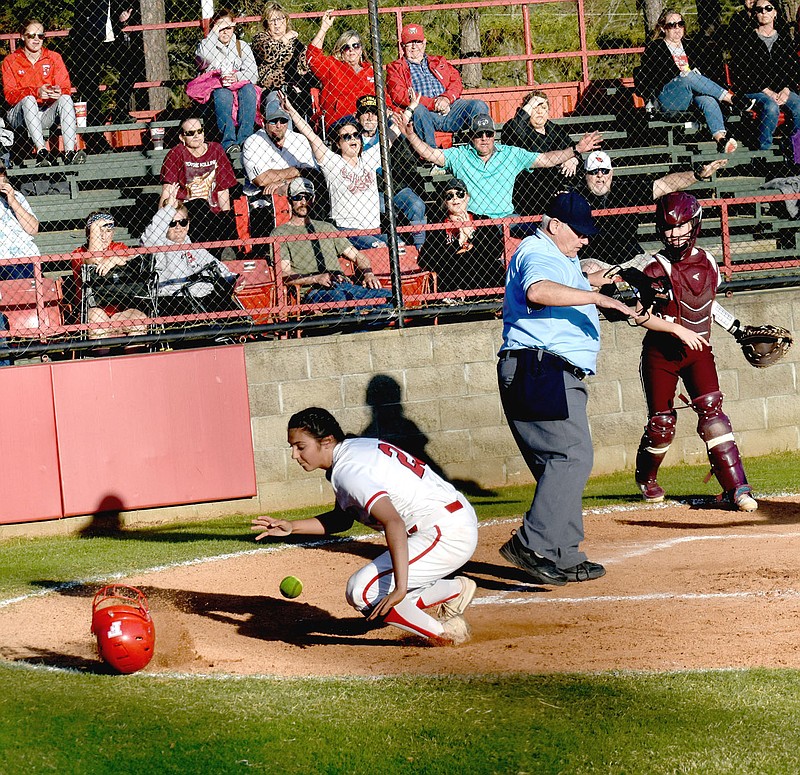 MARK HUMPHREY ENTERPRISE-LEADER/Farmington sophomore Skyler Riddle scores a key run on a passed ball to cap a fifth inning rally by the Lady Cardinals, who came back to beat Gentry, 7-6, on Thursday.

FARMINGTON -- Farmington's softball team benefited from adjustments and tenacity, pulling victory out of the jaws of defeat by a 7-6 score over Gentry (10-3, 2-3) on Thursday.

The Lady Cardinals (14-2, 3-0) fought their way back from a 6-1 deficit when Gentry sophomore Madison Voyles walked with one out and scored on Taylor Norman's sacrifice bunt in the top of the fifth.

Gentry got two RBIs from Wheaton and another from Liberty Brannon. The Lady Pioneers scored three runs in the first and two more in the second to jump ahead 5-0.

Farmington unleashed a four run rally in its half of the fifth inning. Freshman Reese Shirey bunted her way on with one out. She moved to second on a passed ball with Remington Adams batting and reached third on a ground out. Shayley Treat smacked a double into the left corner plating Shirey and reducing Gentry's lead by one run to 6-2.

Gentry opted to walk Lady Cardinal catcher Grace Boatright but the gamble cost them when Farmington starter Carson Griggs helped her cause by belting a triple into shallow right field scoring two runs.

Kennedy Griggs' quality at-bat enabled Farmington to draw within a run at 6-5. Facing a 3-2 count, she took ball four, which got past Gentry's catcher allowing a run to score before Gentry junior Kyleigh Wheaton, who earned the praise of both coaches, induced a pop up to shortstop to end the inning with Farmington still behind, 6-5.

"She was doing a good job of keeping them off balance," said Gentry coach Erica Jones. "Our defense, as a whole, did a really good job. They really gave us a shot."

"That kid pitched a really good game against us," Osnes said. "We came out passive after a week of not playing and that's something you can't do against a good team like Gentry. They're very well coached, they have good players. We had a problem in the batter's box and we had a problem on defense, but those problems were caused by the team across the field."

Gentry's Randi Jo Bolinger led off the top of the sixth and thought she got a base on balls after a pitch grazed by her. Instead she was sent back to the batter's box with a 3-2 count and struck out swinging on the next pitch.

Jones said she prepared the Lady Pioneers in advance for those type of game situations when calls don't go their way.

"We talk a lot about controlling what we can control," Jones said while noting the team can learn from those things.

Farmington pitcher Carson Griggs got the next two batters to fly out to the same spot in shallow left center.

"That was because of the pitching calls," Osnes said. "I'm very proud of the fact that we never gave up. Freshman Reese Shirey drove in the winning run in the sixth. That was a big hit."

Another Farmington freshman Justine Davidson led off the sixth with a double into deep center field. She scored the tying run on senior Drew Clifford's RBI double setting up Shirey, who reached a full count before sending a single into right center pushing the Lady Cardinals in front, 7-6.

Wheaton then retired the top of the order, inducing three straight fly outs to end the inning.

Carson Griggs proved equal to the task when facing the Lady Pioneers in their last at-bat in the top of the seventh.

Kamryn Uher snagged a line drive from Wheaton at first. Next, Treat fielded a grounder to shortstop and threw Afton Finnell out at first. Carson Griggs administered the coup-de-grace by catching Gentry freshman Hailie Kreger looking at a called strike three to preserve the 7-6 win for Farmington.

Farmington surged ahead in the fifth on the way to defeating Vilonia 5-2 on Friday. The game was tied at two with Farmington batting in the bottom of the fifth when Carson Griggs doubled on a 2-2 pitch driving in a pair of runs to push the Lady Cardinals ahead.

After helping herself at the plate, Carson Griggs (12-1) made certain the lead held. The senior allowing two runs on seven hits while striking out eight in seven innings. Elise Trautman took the loss for Vilonia. She allowed nine hits and five runs over four and a third innings, striking out one and walking one.

The Lady Cardinals opened the scoring in the first inning on Boatright's ground out. In the top of the fourth inning, Vilonia earned a 2-2 tie when Mackenzie Floyd singled on a 1-0 count to score a run.

Adams (3-for-4) went yard in the third inning, smashing one of 9 Lady Cardinal hits in the game. Uher also had multiple hits. 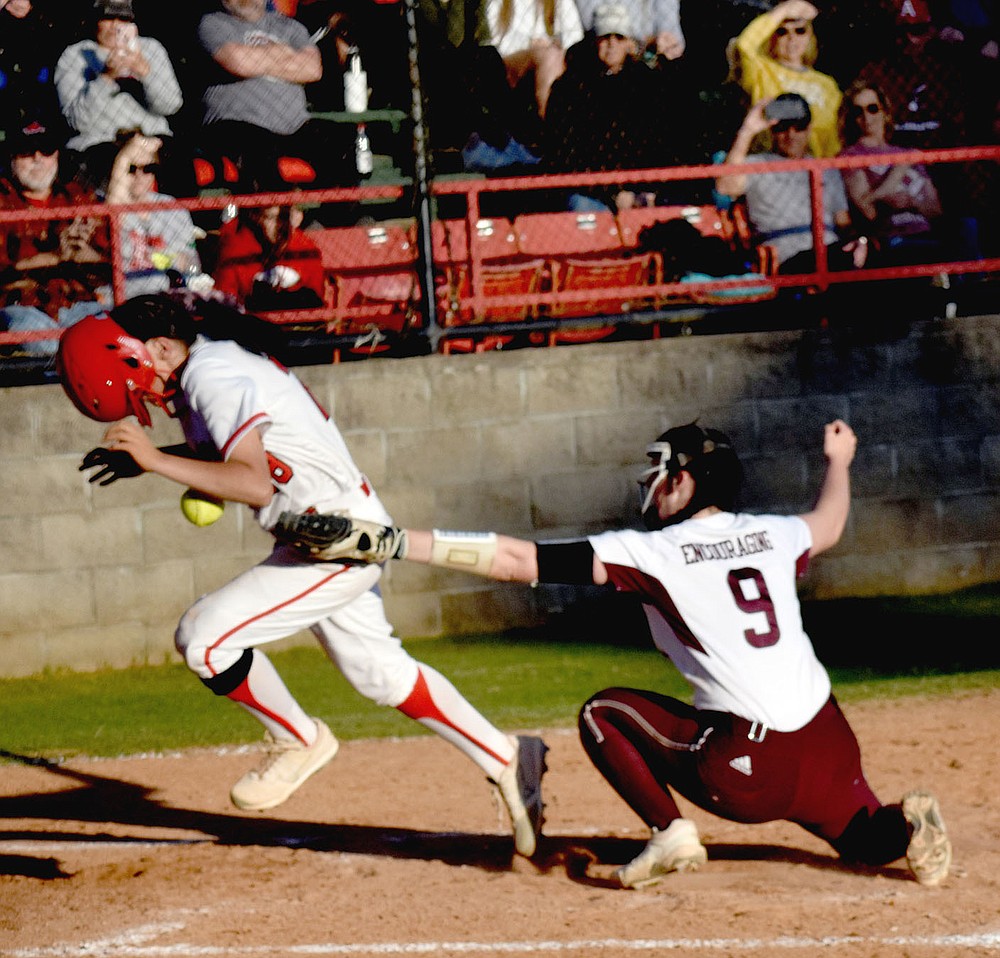 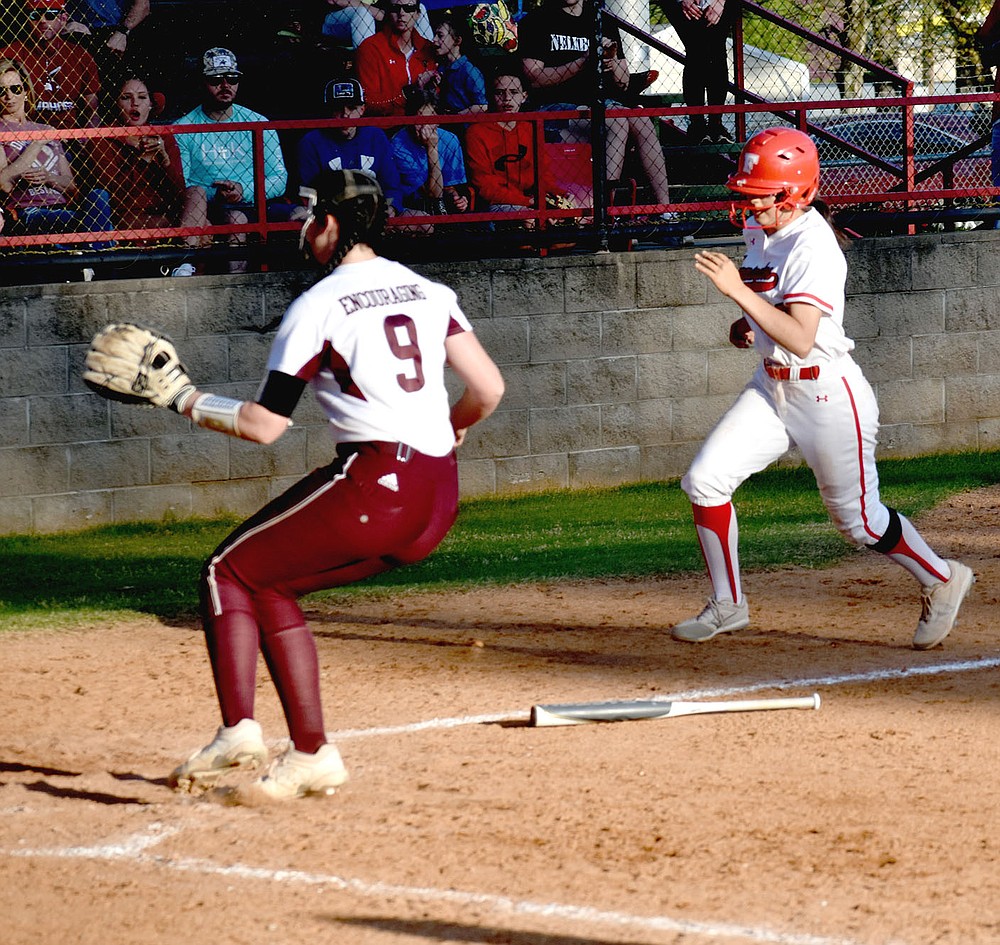 MARK HUMPHREY ENTERPRISE-LEADER/Farmington sophomore Skyler Riddle races home while Gentry pitcher Kyleigh Wheaton covers home plate on a passed ball during a fifth inning four-run rally by the Lady Cardinals, who were down 6-1 when the rally began.
ADVERTISEMENT