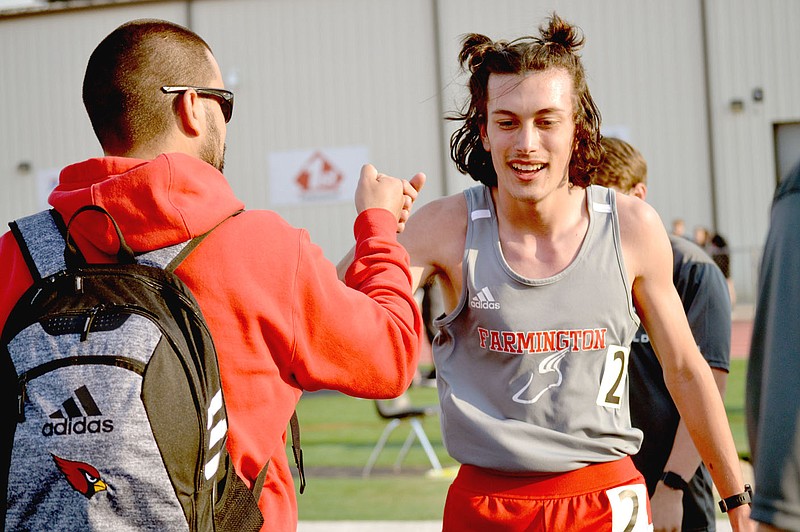 Annette Beard Special to the Enterprise-Leader/Farmington’s Mason Gansz receives congratulations from Farmington coach Greg Pair after winning the 1600 meter race with a time of 5:09.59 during the Blackhawk Relays hosted by Pea Ridge on Thursday.

FARMINGTON -- Wholesale changes in the coaching ranks haven't diminished Farmington's enthusiasm for track and field with both the boys and girls teams competing at the Blackhawk Relays on April 8.

Pea Ridge hosted the meet at Blackhawk Stadium with the Cardinals going up against the hosts along with 4A-1 foes Prairie Grove, Gravette, Gentry and Shiloh Christian plus West Fork and Decatur.

Since August three coaches have left the Cardinal track and field program beginning with the revelation of criminal charges filed against Si Hornbeck from southwest Arkansas and his resignation last summer.

In December boys assistant coach and former head coach Mike Adams, who was also head football coach, announced his retirement at the end of the semester in January; and most recently his son, boys track and field head coach Spencer Adams, resigned upon landing the head football coaching job and athletic director position at Barton.

Zach Akridge won the 400 meter in 53.60 while Devonte Donovan captured the high jump championship by clearing 5-8 to beat out teammate Josh Blakely, who finished second by going 5-6. Donovan's time of 23:74 placed him second in the 200 meter.

All-around athlete Addison Fenton, a stalwart volleyball front-liner for Farmington, placed second in the 100 meter hurdles with a time of 17.29 and replicated the placing in the 300 meter hurdles in 50.65. She came in third in the long jump by leaping 15-2.5 and fifth in the shotput with a throw of 29-8.