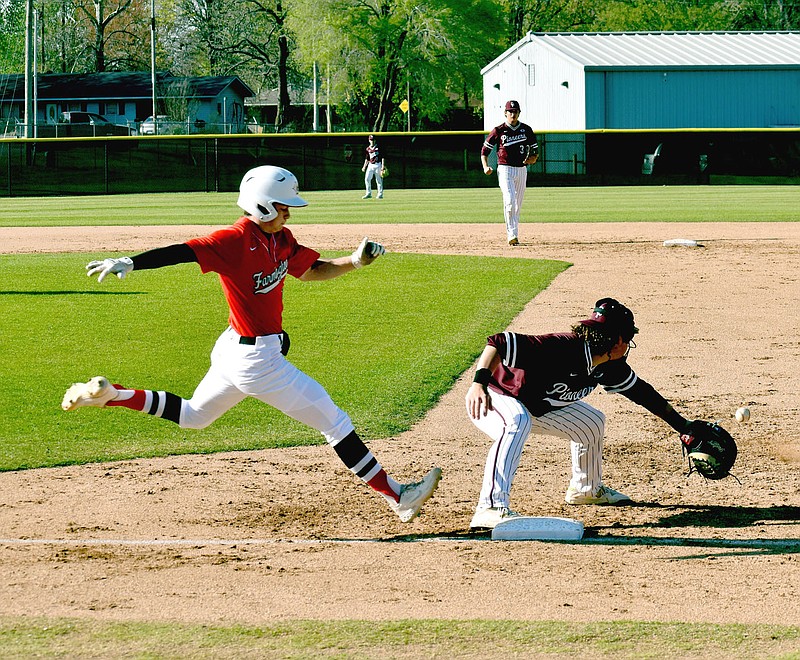 MARK HUMPHREY ENTERPRISE-LEADER/Farmington senior Trevor McCuin arrives at first simultaneously with a throw coming from the second baseman. McCuin reached base safely, but was later tagged out during a rundown. Farmington beat the Pioneers, 10-0, Thursday.

FARMINGTON -- Gentry became the latest baseball team in the region to taste defeat at the hands of the Farmington Cardinals, now 14-4 overall and 4-0 in the 4A-1.

Farmington jumped ahead early, scoring seven runs in the first inning on the way to blanking Gentry 10-0 in five innings Thursday. The Cardinals scored four runs with no outs. Lawson Devault walked to put two runners on for Kyson Bridges, who stroked a 2-run double on an 0-2 pitch. Trevor McCuin got aboard and Farmington's seventh run scored when a throw went past first.

Gentry starter Cody Tucker got out of that fix by inducing a fly ball to shallow right field, then got the help he needed from the Pioneer infield. With Tate Sutton batting, McCuin got caught in a rundown and was tagged out between second and third. The Pioneers completed as nontraditional double play by tagging Sutton out trying for second after he hit a single.

"We hit the ball good in the first inning, but we can't be satisfied with that. We made a couple of [base running] errors and we struck out a couple of times," said Farmington coach Jay Harper, who challenged his ball club to cash in on momentum noting they went scoreless for two straight innings after the initial outburst.

Trailing 8-0 after four innings, Gentry had a chance to get something going when Brayden Feathers led off the top of the fifth by singling up the middle, but lost the opportunity on a base running error. The next man up, Gary Cox, had the count even at 1-1 when Feathers was thrown out stealing.

Farmington starter Myles Harvey (five innings, seven strikeouts) then struck out Cox. The Pioneers got a break when Tucker reached on an error only to have Riggs Harper go down on a called strike three.

The Pioneers also couldn't extend the game on defense despite getting the first two batters out in the bottom of the inning. Tucker beaned Devault on the heels of a strikeout. Bridges recorded an infield single when he made contact and the ball died halfway to third, putting two Cardinals on base.

McCuin drew a walk to load the bases for Weston Sills, who ended the contest with a base hit that drove in two runs.

Tucker absorbed the loss for the Pioneers, striking out three in 4.2 innings.