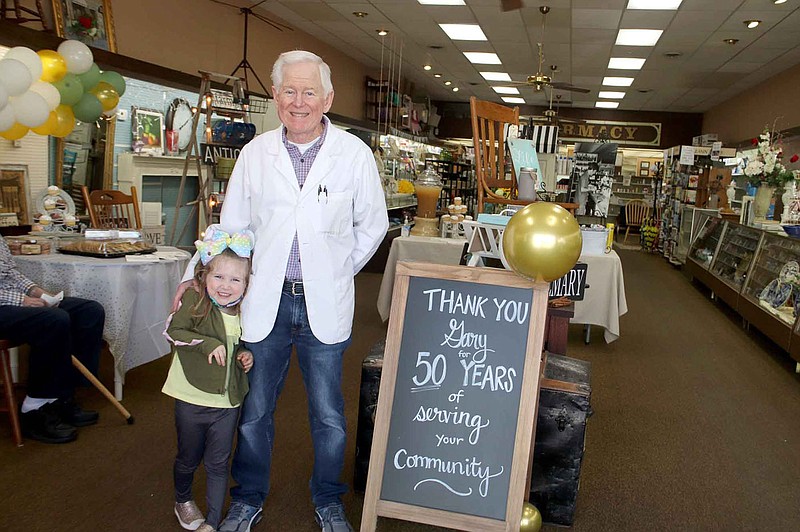 LYNN KUTTER ENTERPRISE-LEADER Sterling Drug in Prairie Grove held a reception April 1 in honor of Gary Davis to celebrate his 50th year as pharmacist for the local store. His youngest granddaughter, Raelynn Chandler, 4, of Tulsa, was in town to celebrate with her granddad.

PRAIRIE GROVE -- Sterling Drug owner and pharmacist Gary Davis has seen four generations of families come through his store in the past five decades.

He celebrated his 50th anniversary with Sterling Drug on April 1 and doesn't have any plans to retire soon, even though his wife Susie has been suggesting that for at least 15 years.

Davis, who is 74 years old, said he's stayed so long because of the people he serves.

"You know the people," he said. "I know four generations of people who have come through here."

Walgreens has tried to purchase the business for many years, but Davis said he's resisted because he believes the company would take his prescriptions to Fayetteville, close the Prairie Grove location, "and that's it."

Staff with Sterling Drug hosted a reception last week to honor Davis' 50th anniversary and invited the community and his customers to stop by and greet him.

Davis followed his father, Clarence Davis, in owning the store and serving as pharmacist on site. His father became a pharmacist at the business in 1928, left for Rogers for about five years and then returned to Prairie Grove.

Clarence Davis, Vincil Bell and several others with a third party bought the business in the 1950s, and Sterling Drug was incorporated in 1957.

None of his children showed an interest in becoming a pharmacist. The closest to the career, Davis said, is his oldest son who is studying to be a nurse practitioner.

While he's not planning to retire, Davis said he is taking more time off and is traveling more.

His wife said she's proud of his time with the pharmacy, even though she's tried to get him to retire.

"I've never done anything for 50 years at a time, except be a mom," Susie Davis said. "I've very proud of him. He's a wonderful pharmacist. It's definitely his calling."

Mayor Sonny Hudson, who dropped by to congratulate Davis on his 50th anniversary, noted that a pharmacy is important to any community.

"To have one around that long with the same people, I think it's just wonderful," Hudson said. "The continuity of someone like that being in a community that long, it's something we really appreciate. I'm glad he's not in a hurry to retire."

Davis said he was a "soda jerk" at the pharmacy when the store had a soda fountain and counter along one side. He remembers he would have rather been baling hay in the pasture. It was a teenage hangout, he said.

When he started college, he said he wasn't sure what he wanted to do. At one point, he thought maybe architecture and then decided on pharmacy. He graduated from the University of Kansas with a doctor of pharmacy degree.