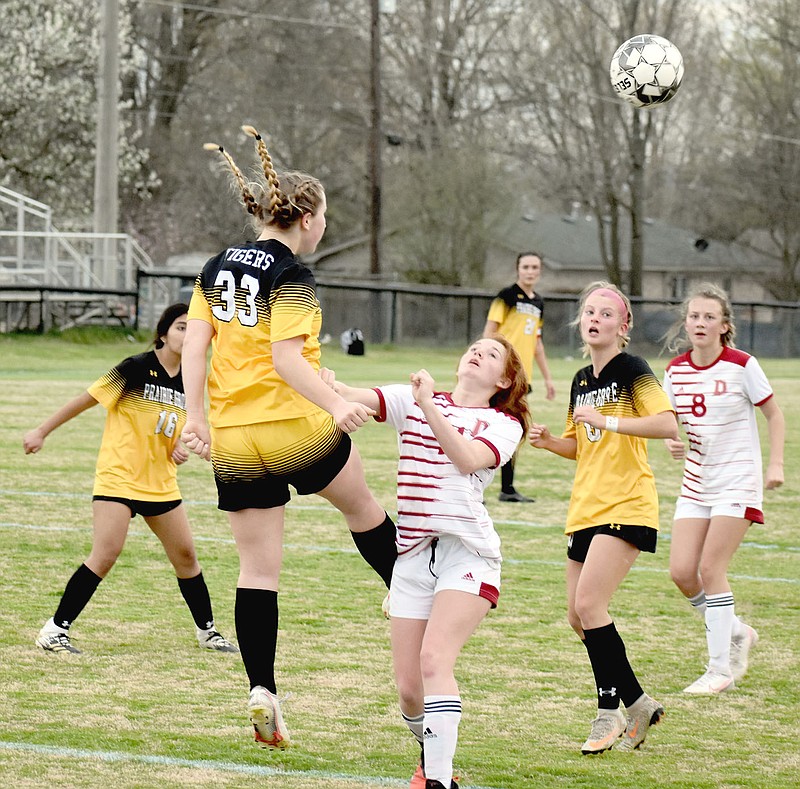 MARK HUMPHREY ENTERPRISE-LEADER/A Dardanelle player nearly gets an unwanted facial as Prairie Grove freshman Emma Henry kicks the ball away from the Lady Tigers' goal during first half action of Prairie Grove's 3-2 win on Tuesday, March 30.

PRAIRIE GROVE -- Trinity Dobbs' second half goal broke a 2-2 tie accounting for the only point of the final 40 minutes, lifting Prairie Grove to a 3-2 girls soccer win on Tuesday, March 30.

The Lady Tigers overcame two fouls called inside the box that set up Dardanelle goals enabling the Sand Lizards to score from point-blank range and even the score twice.

Dardanelle senior forward Annette Navarette made the first penalty kick, tying the match at 1-1 with 14:01 remaining in the first half. Fifty-nine seconds later Dardanelle goalkeeper Bridget Dennis blocked a shot and later recorded a save at the 11:52 mark.

Alyssa LeDuc put Prairie Grove back in front, 2-1, with her second goal of the game with 9:46 showing.

Dardanelle senior Fatima Perez made a penalty kick following a controversial foul call with 8:44 left in the first half to knot the score again, at 2-2.

The Sand Lizards got two more chances via penalty, but couldn't convert on a long kick attempt by freshman Jayden Vazquez with just over four minutes to go in the first half. Vazquez kicked the ball over the goal with 1:53 on the clock and Prairie Grove goalkeeper Taci Vickery made a save with 43 seconds left before halftime, a feat she would repeat three times during the last two minutes of the second half to preserve the Lady Tigers' 3-2 win.

"We were like, 'No more penalties, stop fouling in the box.' There were some penalties that could have gone either way and we were on the short end of a couple, but to their credit they [Dardanelle] took advantage of those plays and scored when they needed to," Stewart said. "Group effort for sure. We have a lot of young girls, got a couple with a lot of veterans on our team and it took everybody we have tonight."

"Dardanelle is very well-coached, they're always a very tough team, they're traditionally a state tournament team so we knew we were going to having a tough game tonight. Dardanelle is fantastic. I can't say enough about them and their coaches and always a tough match when we play them."

Coming off spring break Stewart noted both teams struggled to get back into the groove.