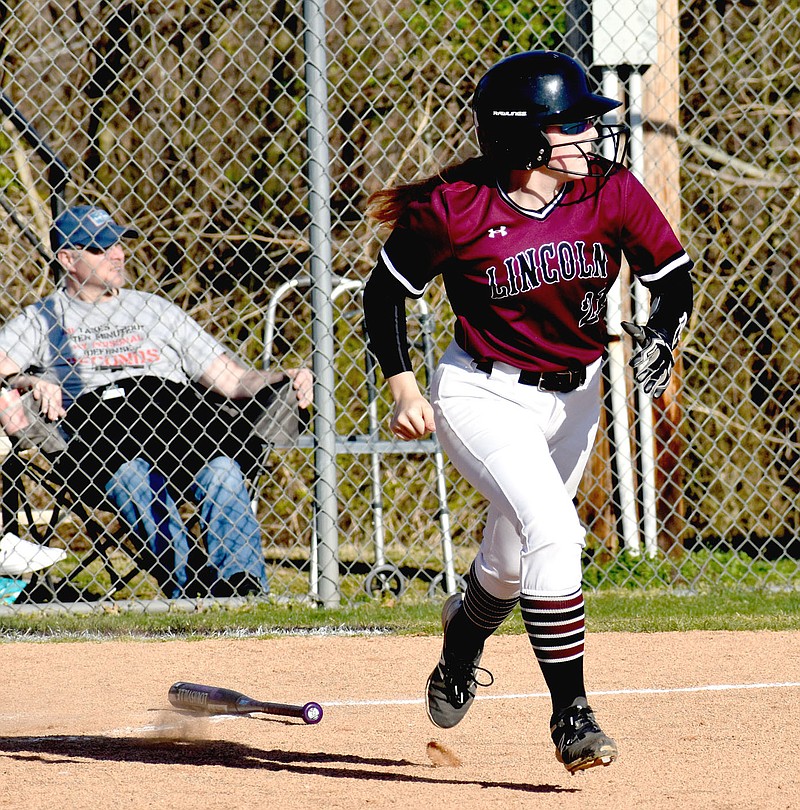 MARK HUMPHREY ENTERPRISE-LEADER/Lincoln freshman Amber Bryant takes off for first. Base running has become an emphasis this season for the Lady Wolves, who scored a pile of runs on passed balls while sweeping Ozark, 13-3 and 11-1, on April 1.

That's by design according to coach Beau Collins, who's been working with the Lady Wolves on being aggressive on the bases, trying to put pressure on a defense to force them to make plays instead of waiting for them to mess up or give up something.

"It's been a learning situation for the girls learning what they can do and a learning situation for me learning when to bring a girl and who's got the speed to do it," Collins said. "We learn to read outfielder's arms, learn which girls to take an extra base, which ones can pressure a defense, and if we've got that figured out by the time the conference tournament postseason gets here I think it'll be great."

Paige Umberson pitched game one and Amber Bryant did the honors for the Lady Wolves in game two. The Lady Wolves also interchanged catchers a versatility Collins sees as an advantage.

"I've got two girls, who can catch so we don't have to ask one girl to stay back there the whole time. It's kind of nice with one catching and one being in the outfield," Collins said. "We've got a pitcher and a third baseman so they swap around occasionally. It's been good to have some girls to move around to have some extra pitchers."

Lincoln led 1-0 at the end of the first inning then slowly built its lead. The Lady Wolves added a pair of runs in the second inning on Katie Jones' triple followed by Ryleigh Landrum's RBI single.

Ozark showed signs of life mustering a rally to pull within 3-2 in the top of the third inning with the bases loaded. Umberson eased out of the inning with a called strike three to maintain Lincoln's one run advantage.

Back on offense, Lincoln added two insurance runs on Bryant's double but left two runners on base as the inning ended with the Lady Wolves leading 5-2.

Ozark reduced that by one run with an RBI single in the top of the fourth to make the score, 5-3, but they would get no more runs.

Jones led off the bottom of the inning with a triple and was plated by a Landrum' double. Chloe Dawson sent her home with a triple scoring on Lily Riherd's ground out to up the lead to 8-3.

The next four batters walked, but one was tagged out trying to sneak to second. Eventually Lincoln scored two more runs in the fourth when a pickoff throw went past third and held a 10-3 lead that lasted into the sixth inning.

Lincoln loaded the bases on walks in the sixth and Kristen Rhine got credit for pushing a run across when she walked. Paisley Curtis' sacrifice fly stretched Lincoln's lead to 12-3 and the game ended with Dawson batting. A passed ball allowed the 13th run and Lincoln won by run-rule, 13-3.

Lincoln led 3-0 after one inning before giving up a run on a double off the wall in the top of the second. Similar to game one, the Lady Wolves couldn't increase their lead until Saylor Stidham drove in the fourth run on a sacrifice fly in the third. Lincoln loaded the bases and scored two runs on passed balls in the fourth extending its lead to 6-1.

During the nonproductive innings, Bryant remained steady in the circle holding Ozark to one run.

"Amber Bryant is a freshman and has really helped out the pitching. We've got five pitchers now and three of them have thrown varsity games. It's been a big relief to Paige to have help in the circle," Collins said.

The Lady Wolves finished off the game in the fifth by exploding for five runs. Bryant led off the inning with a single up the middle stealing second and advancing twice on passed balls to score. Dawson smacked a 2-run double as did Umberson sandwiched around a walk to Riherd and the Lady Wolves again won by run-rule, 11-1.