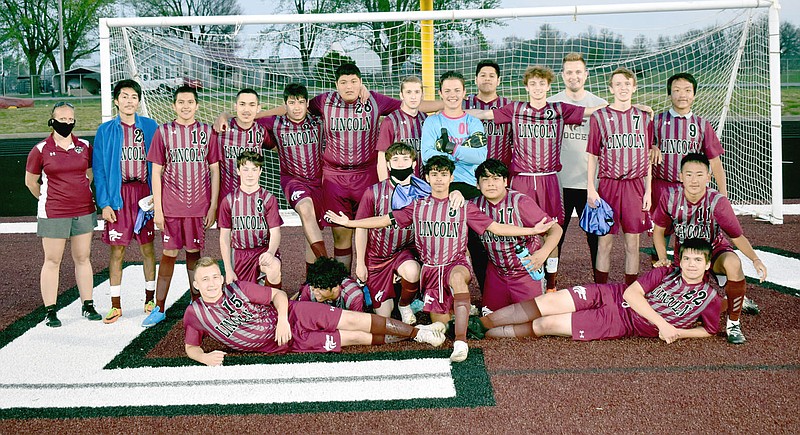 The Wolves got two goals from sophomore forward Rafael Regalado and one from freshman midfielder Tsimtxhua Vang to nail down the win. Lincoln benefited from having the wind at its back for the second half

The Wolves led 2-1 at halftime and increased their lead over the Highlanders to 3-1 on Regaldo's second goal of the match. Eureka Springs got a breakaway by quickly advancing the ball with most of Lincoln's players out of position and scored at the 29:36 mark of the second half to make it a one-goal match.

Lincoln never allowed that same scenario to develop again. The Wolves kept the ball on the Highlanders' end of the field for virtually the rest of the contest aided by a favorable wind.

"We had to keep constant pressure on them on their defensive third of the field and hope their goalkeeper would drop some of the shots," said Lincoln coach Angela Guillory.

Lincoln freshman goalkeeper Jakkson Grisham got undercut when coming out to the left of the goal after the ball. He landed hard on the turf, but hung onto the ball, giving Eureka Springs no chance to kick into an empty net. That incident happened with 22:16 remaining.

Grisham shook off the thud and played strong finishing with 7 saves. Guillory and Watson praised the play of junior midfielder Tristan Norton, who got credit for stopping several Highlander attacks.

"He's a midfielder so he basically gets to play everywhere. A lot of times when the ball came to our defensive third of the field, he was in position to stop the ball," Guillory said. "On offense he would show up helping to make passes so that we had scoring opportunities. He's a true midfielder, he was all over the place."

The program continues to draw a lot of interest, despite the cancellation of the 2020 season in which five matches were played before all spring sports shut down due to covid, and turnover in the coaching ranks. Guillory attributes that to the zeal of various coaches affiliated with the program.

"There have been a lot of coaches, but all of the coaches have been passionate about soccer. The kids feed off that. They appreciate the passion the coaches bring to the table," Guillory said.

She feels the future of the program beams bright at Lincoln.

"The kids are excited to have another athletic avenue to pursue. Soccer allows them to be athletic and physical. They are so willing to try new things and I think the program will continue to grow."