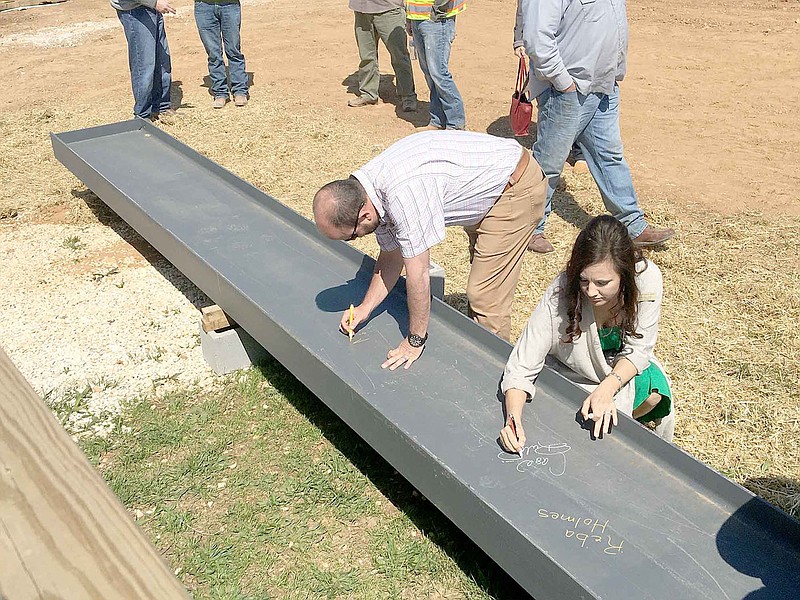 DAVID KELLOGG SPECIAL TO ENTERPRISE-LEADER Prairie Grove School Board members Casie Ruland and Matt Hargis participate in a topping ceremony for the district's new junior high school. This beam will be the highest point for the new building.

PRAIRIE GROVE --Prairie Grove's new junior high building will have tornado safe corridors to give a place for students and staff to quickly evacuate during severe and dangerous weather, according to David Kellogg, assistant superintendent of schools.

The two tornado safe corridors have concrete roofs and concrete walls. One corridor runs north-south and the other goes east-west. Classrooms are located off the reinforced hallways.

Steel doors to the outside of the building are located at the end of the corridors.

Kellogg said the steel doors can be opened and closed automatically with the push of the button in case of a tornado or an intruder.

The school is constructing the new school for a guaranteed maximum price of $10.6 million or $192 per square foot, not including architecture and engineering fees. Other costs not in the maximum price will be furniture and technology. The district is paying for the project with construction bonds and state funding.

Pick-it Construction is the construction manager for the project, and Architecture Plus, Inc., is the architectural firm that designed the building.

Doug Bryant, on-site project manager, said the Prairie Grove school is the first school building for Pick-it Construction, but Bryant has been involved with the construction of four schools in Alabama.

Bryant pointed out most schools are built basically the same way. There's a common area in the middle of the building with classrooms extending out from the center. The tornado-safe corridors, which were recommended by the architect, are one big difference in this school, Bryant said.

The corridors are a "good deal," Bryant said.

The project is also more personal for Bryant because three of his children will attend school in the new building at some point in their education.

Bryant said the project is about 40% complete and scheduled to be finished in March 2022. The new junior high will open for the 2022-23 school year.

The building, which has a total of 54,795 square feet, will have 22 classrooms, which includes specialty rooms for band, choir, computer lab and career technical education courses.

Coming inside the front doors of the building, students and staff will see the front office and administrative offices on one side of the entryway and the library/media center on the other side.

The gym will be a competition size gym but will not have bleachers. It mainly will be used for physical education classes, Kellogg said. The large commons area/cafeteria will have a stage with an outside patio area for eating. The new school will not have student lockers.

Joey Sorters, junior high principal, said he's looking forward to being in a new building. One of the biggest benefits of the new facility, Sorters said, is that all students will be under one roof.

Now students have to go outside to get to some of their classes.

The junior high's student enrollment is almost 340 students, Sorters said. The school has about 25 classroom teachers.

In all, the new junior high campus, which includes a parking lot to the north of the building, a school bus loop behind the building and an 1.4-acre detention pond, is located on 16 acres off Bush Street.

The project also includes an extension of Viney Grove Road in front of the school. The school district is paying to install 760 linear feet of that street, and the city of Prairie Grove will finish the new street to connect to Buchanan Street or Highway 62B.

The city also is paying the costs to improve the intersection of Viney Grove Road and Bush Street. 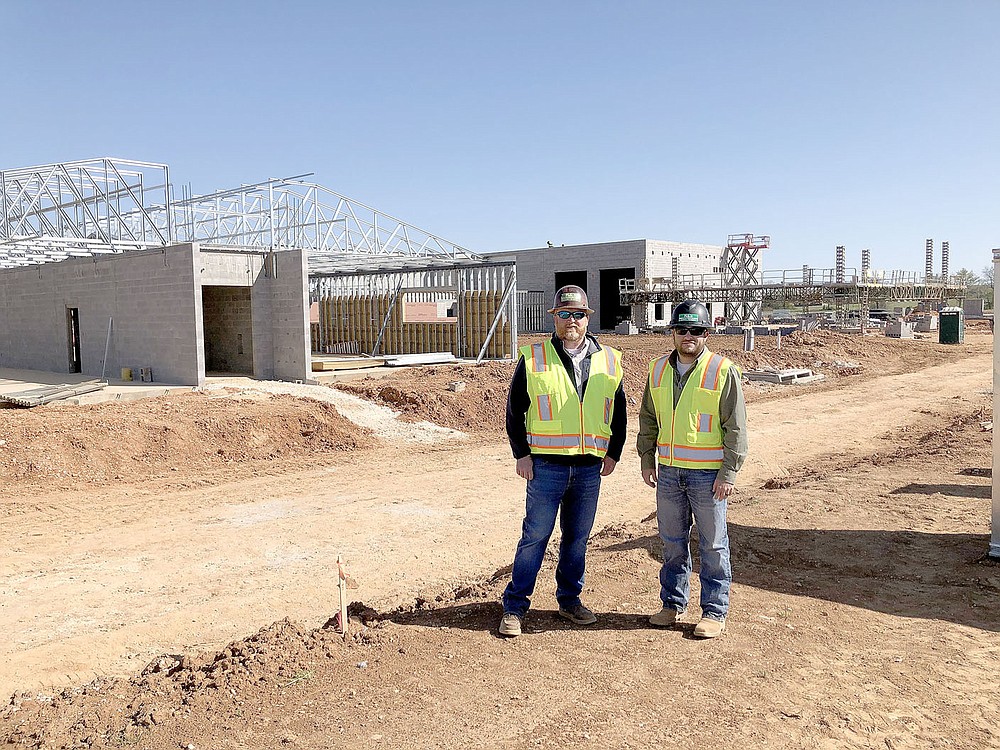