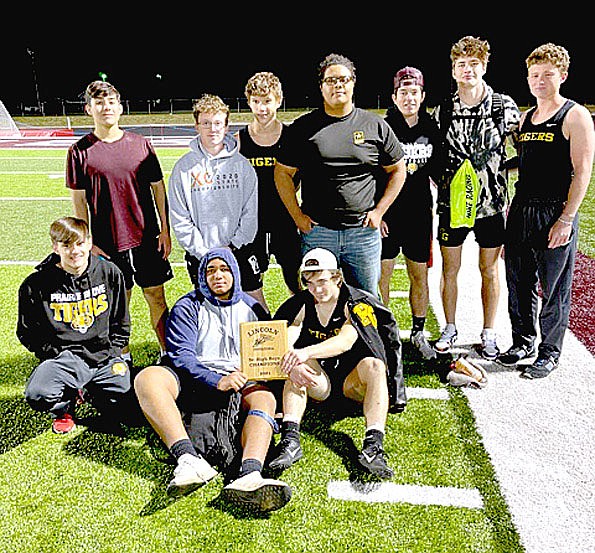 The meet, hosted by Lincoln, showcased a rivalry in field events with the Tigers contending against Lincoln senior Eli Rich, son of long-time Lincoln track and field coach Tim Rich.

Semrad helped the Tigers win the boys 4x100 relay and place second in the 4x400 relay and John Elder may enter him in the 400 meter race this week.

"He ran in the 4x400 and really could get around the track," John Elder said. "I'm starting to figure him out and learn what running events he may be good in."

Foster beat out Lincoln's Eli Rich by clearing 5-09 with Eli Rich at 5-06 and Young placing third for the Tigers by jumping 5-04.

Semrad found himself in a showdown with Eli Rich one more time and won by reaching a distance of 43-11.75. Eli Rich competed well for Lincoln reaching 41-03.00 for second place. Young came in fourth for Prairie Grove at 39-01.00.

The Prairie Grove girls placed fourth with a good showing.

"I'm really proud of the way they competed at our first full meet," John Elder said. "We've got some good kids doing good things so hopefully they'll keep getting better."

Trinity Dobbs won the 100 meter dash with a time of 13.77 beating out second place Katie McBroom, of Cedarville, who finished in 14.18. Kaelynn Keeland placed 17th for Prairie Grove in 15.81.

Jazmyn Preston placed third in the 200 meter with a time of 29.22 while Charly Wade placed eighth in 31.66 and Kenleigh Elder, daughter of coach John Elder, was ninth in 31.69.

Elizabeth Stoufer set the pace with a time of 17.43 in front of West Fork's Joyce Ferguson, who was second in 17.84.