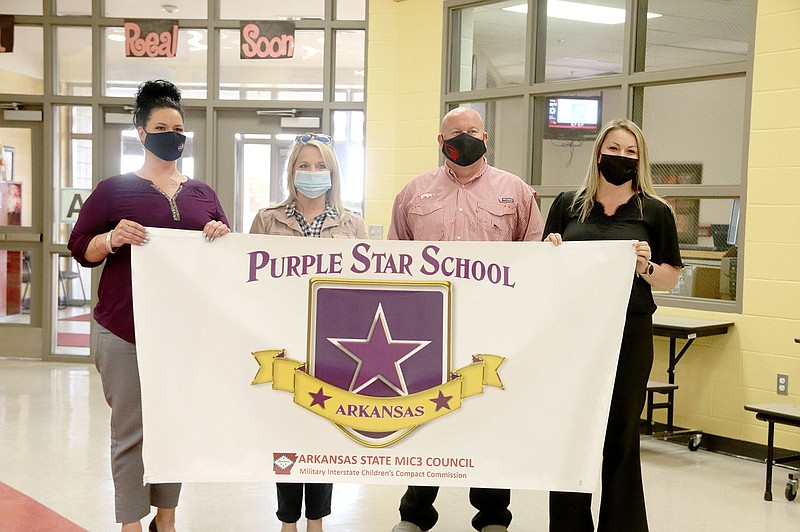 FARMINGTON -- Two schools have been named Purple Star Schools in recognition of their commitment to serve students of military families.

The school board approved a resolution in November 2020 to support the district's military children and families.

Superintendent Jon Laffoon explained then that all districts in Arkansas with more than 3,000 students or with 20 military families are qualified to apply for the Arkansas Purple Star School Award. Farmington has 21 military families and 27 military children.

For Farmington School District, Folsom and Farmington High both decided to apply to the program and were awarded the special status.

Assistant Superintendent Stephanie Pinkerton has received training to serve as the district's military coordinator and liaison.

Jody Bergstrom, a representative for Fort Chaffee, thanked the schools for their efforts in recognizing military children.

"It's so important for schools, like the Farmington district, to recognize what military kids we do have," Bergstrom said. "I have two kids. We don't jump up and say, 'hey, we're a military family,' but we've been through eight deployments as a family. So their life looks a little different."

Bergstrom added, "It's so amazing to see schools that will step up and recognize our military kiddos. We ask them to sacrifice, and they don't get that choice."

Andelyn Wright, council vice chair and a representative from Ebbing Air National Guard, said it means a lot to military kids when they come into their school and see the Purple Star School banner. The training also is important, she said, because staff are trained to help students with the transition of living a military life.

To qualify for the Purple Star School Award, schools must fulfill all required activities.

Required activities include designating a military education liaison who will serve as the point of contact for military families and will complete special training for this role. The liaison identifies and informs teachers of the military students in their schools. In addition, the school board must pass a resolution to show its commitment to military families, and the district must keep a dedicated page on its website with resources for military families.

Schools also are required to provide one optional activity.

Wright said April is designated as the Month of the Military Child, and she said resources are available to show ways schools can support military kids. One simple idea, she said, is switching to purple lightbulbs in recognition of military children.

Pinkerton said only one other school in Northwest Arkansas has received a Purple Star School award.