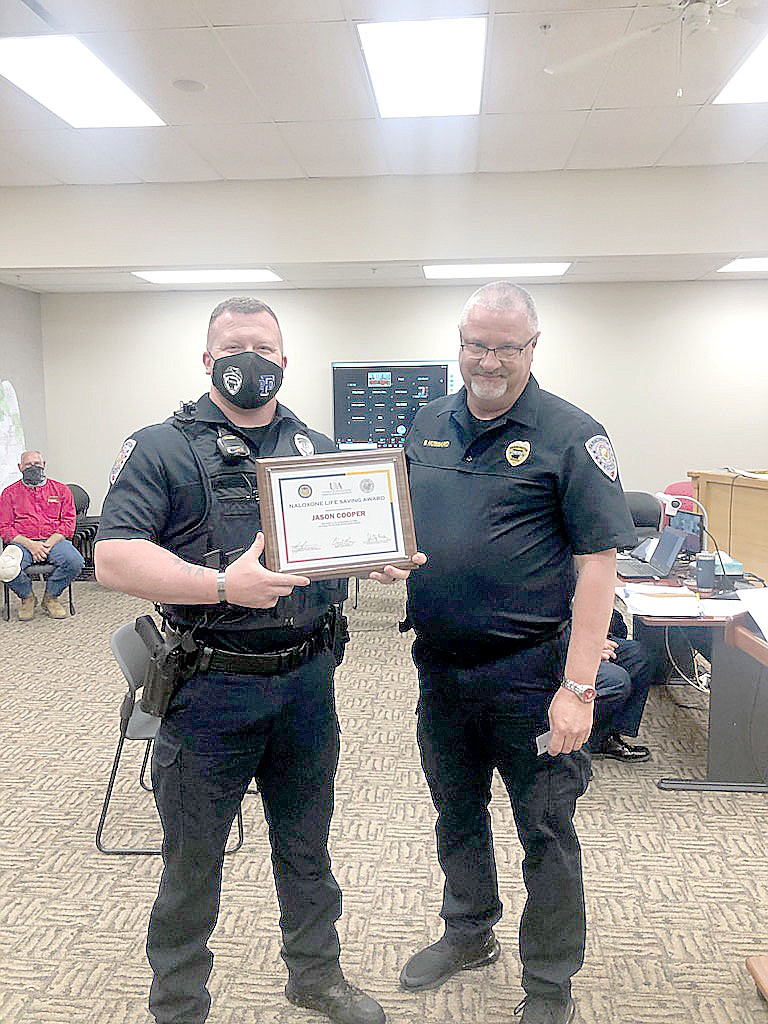 FARMINGTON -- Police Chief Brian Hubbard presented one of his officers an award last week for using a naloxone nasal spray to save the life of a man who appeared to have overdosed on opioids.

"It is with great pride that I present this Naloxone Life Saving Award from the University of Arkansas Criminal Justice Institute and the Farmington Police Department to Officer Jason Cooper," Hubbard said as he presented a plaque to Cooper at the City Council's April 12 meeting.

"With all the negative publicity that police officers are getting, even the ones who hate us and won't do what we say, this guy is here today because of officer Cooper," Hubbard said.

The incident occurred Nov. 13, 2020, in an area near Robb Street after officer Jason Howerton, with Cooper assisting, stopped a vehicle with a suspected intoxicated driver.

Hubbard said the driver refused numerous requests to exit the vehicle. Prairie Grove police had shown up and assisted Farmington by placing stop sticks behind the vehicle's tires.

As Howerton attempted to bust out the window of the vehicle, the driver put his vehicle in reverse, with the tires hitting the stop sticks, causing air to come out of the tires. The suspect continued to try to flee in his vehicle, but the two officers were able to remove him from the vehicle.

Once the driver was removed from the vehicle, Cooper took the driver to the ground, Hubbard said. During this action, Hubbard said Cooper's shoulder popped out of socket, but as Cooper stood back up, he felt his shoulder go back into place.

The suspect refused medical attention, and officers noticed he was slipping out of consciousness while he was in the patrol vehicle. A request went out for Central Emergency Medical Service to respond to the scene.

The officers removed the suspect from the police vehicle and placed him on the ground. Hubbard said Cooper noticed the man's tongue was swollen and he was having a hard time breathing.

Cooper feared the man had overdosed on opioids, retrieved his naloxone kit from his vehicle and administered the naloxone nasal spray. After a few minutes, the suspect was breathing again, Hubbard said. Central EMS arrived and transported the suspect to the hospital.

"Officer Cooper is an asset to this department and to this city," Hubbard told city council members.

Hubbard last week said all officers have a naloxone kit that they keep with them in their vehicles.

The department has had the kits for more than two years, and this is the first time one has been used by the police department, Hubbard said. Cooper administered naloxone when he worked for Fayetteville Police Department. He has been with Farmington since October.

Naloxone is an opioid overdose reversal medication, available either as a nasal spray or an injector. An opioid overdose occurs when opioids have fully blocked the brain’s opioid receptors, causing a person’s breathing to slow down and ultimately stop. Naloxone works by knocking the opioids out of the receptors in the brain where they are having their effect and preventing them from returning. When enough naloxone is administered, breathing will return to normal, saving an individual from the brink of death.