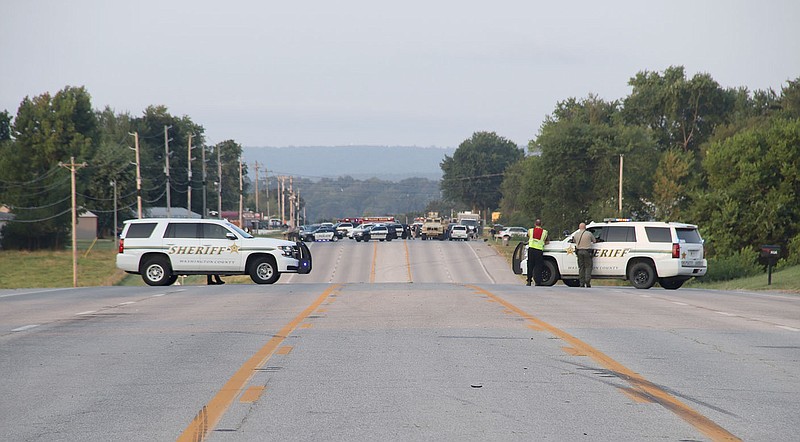 LYNN KUTTER ENTERPRISE-LEADER Police blocked traffic for part of U.S. Highway 62 from about 3 a.m. to 7:30 a.m. Monday because of a standoff with a suspect following a pursuit that started in Fayetteville and ended near the Farmers Cooperative. The suspect has been taken into custody.

PRAIRIE GROVE -- U.S. Highway 62 was closed for more than four hours Monday morning while police negotiated with a suspect who would not relinquish his gun to law enforcement, according to Capt. Jeff O'Brien with Prairie Grove Police Department.

O'Brien said Braiden Collins, 21, of Fayetteville, was taken into custody about 7:30 a.m. Monday and taken to Fayetteville Police Department for questioning.

According to O'Brien, Collins, driving what was suspected to be a stolen Ford Fusion, led the University of Arkansas police on a pursuit through Farmington and Prairie Grove.

According to O'Brien, the suspect showed a gun and refused to drop the weapon. At times, the suspect had the gun pointed at his head, O'Brien said.

Fayetteville's crisis negotiation team talked with the suspect for about four hours and was able to get him to relinquish the gun. The suspect did not have any injuries.

During the standoff, police closed down part of U.S. 62 and diverted traffic toward Farmington onto Arkansas Highway 170.

Multiple agencies responded to the incident, including Prairie Grove, Farmington, Lincoln, Johnson and Fayetteville police departments, along with Washington County Sheriff's Office. Central EMS and Prairie Grove and Farmington fire departments also were on the scene.