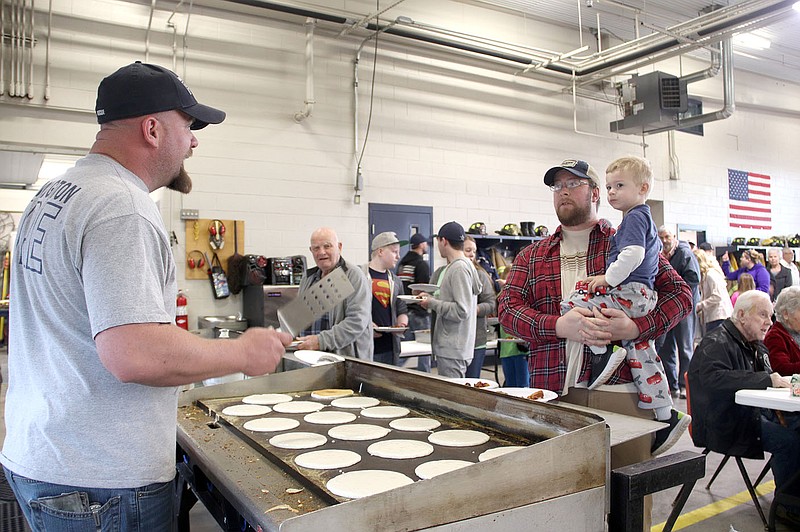 FILE PHOTO Farmington Fire Department has canceled its pancake breakfast that was set for Sept. 11 because of the rising covid-19 cases in Northwest Arkansas. This photo is from the 2017 pancake breakfast.

A decision hasn't been made about the Farmington Fall Festival on the same day, but organizers are discussing whether to still host the festival in light of the covid situation.

Helder gave Farmington City Council the news about the cancellation at the council's Aug. 9 meeting. The fire department had already canceled the annual breakfast usually held in March, with hopes to hold it later in the year. The 2020 breakfast was canceled because of the covid-19 pandemic.

"The numbers were declining when we made the decision (for Sept. 11), but with the increase, I think it's in the best interest of the firefighters and the community," Helder said. "Hopefully, we'll have it in the future."

Mayor Ernie Penn said he agreed with the decision. It's hard to socially distance in the fire station with a lot of people, he said.

Diane Bryant, chairwoman of the city's Community Development Committee, said the committee will give its input on whether to have the fall festival. This year, it will be hosted by Farmington Area Chamber of Commerce and Busy Bee's Canning Company. Last year's festival was canceled because of covid-19.

For now, the festival is scheduled for 9 a.m. to 5 p.m., Sept. 11 at Creekside Park on Broyles Street. The date will be the 20th anniversary of the terrorist attacks on Sept. 11, 2001, and plans include a 9-11 tribute. The festival also will include vendors, food, live music, games and other activities.

A decision on the festival will be made later in the month.