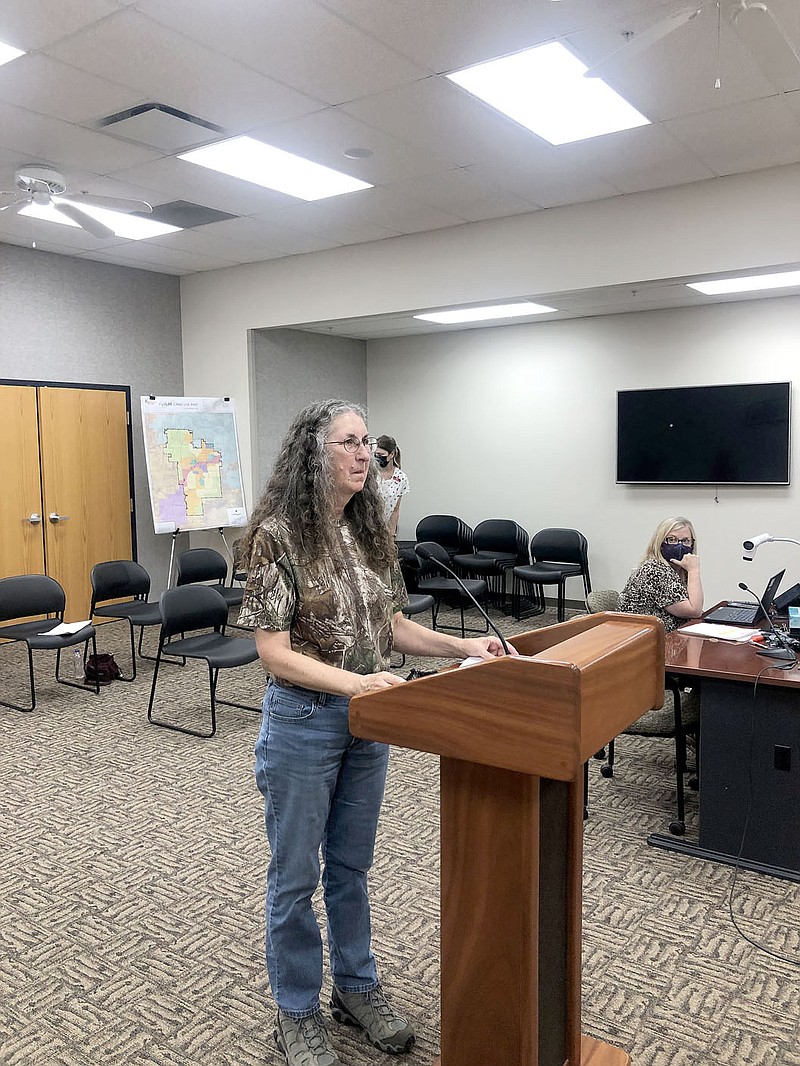 PHOTO COURTESY KELLY PENN Nancy Butts is sworn in as a new member of the Farmington Library Board. She is replacing Betty Hummel, who has resigned from the board. Hummel was instrumental in Farmington opening its own library in 2005 and served as board president for many years. Butts is retired as a media specialist with Farmington School District.

FARMINGTON -- Farmington City Council returned to earlier covid protocols last week for its August meeting. The public was allowed to attend through Zoom only. Council members could choose in-person or Zoom, and city staff were allowed to attend in-person.

The city will provide limited access to future meetings for representatives who need to present an item on the agenda.

Mayor Ernie Penn announced the change for future city council and planning commission meetings on Aug. 3 because of the increase in covid-19 cases.

"I want us to be safe and proactive to protect each other," Penn said in an email to city staff, elected officials and others.

The council at its Aug. 9 meeting placed on second reading two ordinances to deal with unsightly and unsanitary premises and the condemnation and removal of buildings that are considered a nuisance.

City Attorney Steve Tennant recommended the council wait one more month before adopting the ordinances because each has a penalty clause attached to it. He said he wanted to give time for feedback from citizens about the ordinances.

One ordinance requires premises to be kept free from weeds, rank grass, garbage, rubbish and other unsightly and unsanitary articles. It also requires property owners to eliminate, fill up or remove stagnant pools of water that may become a breeding ground for mosquitoes, flies and germs harmful to the health of the community.

The city already has an ordinance for maintaining property. This new ordinance says a person found guilty of violating the ordinance would receive a fine up to $1,000 for the first offense, up to $2,000 for the second offense and not exceeding $4,000 for each subsequent offense or violation.

If the violation is continuous with respect to time, then the penalty for allowing the continuance is a fine not to exceed $500 for each day that it continues.

The city will give seven days' notice to a property owner found in violation of the ordinance. If the owner does not take care of the issue, then the city police chief is authorized to go on the property and cut and remove the weeds or rank grass or eliminate any unsanitary or unsightly condition, and the cost will be charged against the premises as a lien on the property.

For the second ordinance, a property owner has 30 days to abate a house or structure that has been declared a nuisance by the Farmington City Council. After the 30 days, the city would impose a fine of not less than $250 or more than $1,000 against the owner of the structure. Each day afterward that the nuisance is not abated is considered a continuing offense punishable by a fine up to $500 per day.

If the council decides Washington County Circuit Court has jurisdiction, the ordinance gives the council the authority to employ an attorney to bring action against the owner of the building. If the court declares the structure a nuisance, the city can impose a fine up to $1,000 and a fine up to $500 per day if the nuisance is not abated and continues.

A resolution that declares a structure a nuisance has to provide the reasons it has been condemned as a nuisance. The ordinance gives the city authority to demolish and/or remove a structure declared a nuisance if the owner does not abate the property. If the city has any net costs in removing a house or structure, then it would place a lien on the property.

In other action, the council approved an ordinance to waive competitive bidding for emergency repairs to storm water drainage at the corner of Frisco and Riveria in the Valley View Subdivision.

Floyd Shelley, public works manager, said the drainage has failed in that area. He is recommended the city use Backus Concrete LLC. The work will include replacing about 200 feet of corrugated drainage pipe and making fence and yard repairs. The damage is the result of past rainfall, Shelley said.

He explained that in one section, the 30-inch drainage pipe has been smashed to about 18 inches tall.

Backus has already repaired damage in the same area and was willing to work on the project, Penn said.

"Because of the construction world, it's hard to get someone to do small jobs," Penn said in recommending the city use Backus for the project.

Penn said he doubted that anyone inspected drainage construction in the Valley View subdivision because it was in the county at the time.

"So this may be one of many repairs we'll have to make in the future," Penn said.

• The council appointed Nancy Butts to the Farmington Library Board to replace Betty Hummel, who has resigned. Butts is retired as a media specialist from Farmington School District.

• The fire department has received a $77,619 assistance to firefighters grant from FEMA, for a vehicle exhaust extraction system for the fire station. Chief Bill Hellard said the system will pull diesel and exhaust out of the bay and help reduce the risk of cancer in firefighters. The city's portion will be about $4,000. Hellard said he will request bids for the system.

• The citywide fall cleanup will be held 7 a.m. to 2 p.m., Sept. 10 and 7 a.m. to noon, Sept. 11. Residents will be able to bring items, including old electronics, to throw into dumpsters behind the fire department.

• For the month of July, the city issued 83 building permits for single-family homes with a value of $21 million for those permits.