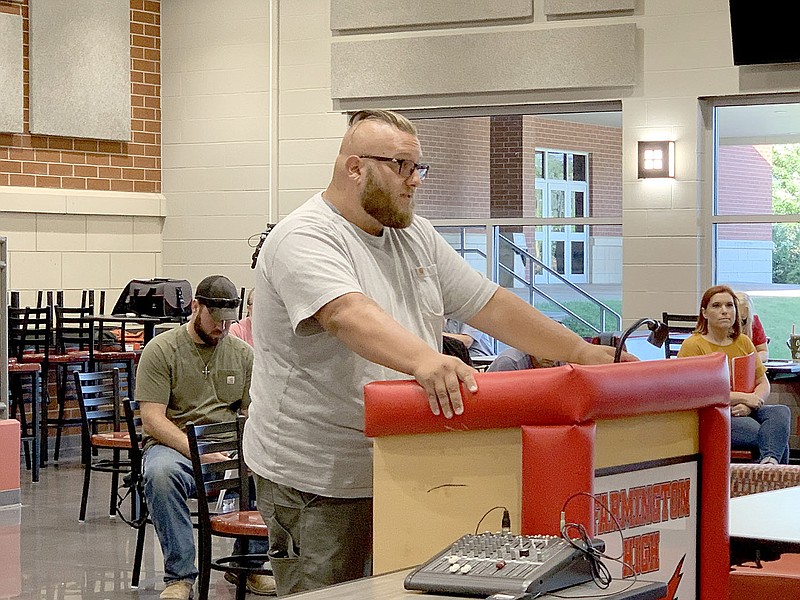 LYNN KUTTER ENTERPRISE-LEADER Devin Freeman, a parent in Farmington School District, addresses the school board Monday about the mask mandate. He and three other parents asked the board to lift the mandate and make masks optional.

FARMINGTON -- Four parents addressed Farmington School Board on Monday, each asking the board to drop the facemask mandate put in place because of covid-19.

"Your job is to educate my child, not to make health decisions regarding my child," said Dustin Fitts, who told board members he attended Farmington schools from kindergarten to 12th grade and has a 9-year-old in Farmington now. "Nobody wants my kid safer than I do, I can promise you that."

Fitts said there was not any science data to back putting children in masks, and covid poses little risk to children. Fitts noted that the flu is more deadly to children than covid-19, yet no one suggests masking children during the flu season.

The board voted 3-1 during a special meeting Aug. 10 to approve an Emergency Communicable Disease Plan that included an indoor mask mandate for all staff and students in kindergarten-12th grade. Board member Amy Hill voted against the motion to approve. As part of the plan, the board will review data and make changes when transmission goes down.

Farmington's meeting agenda policy requires community members to submit a request for an agenda item in writing at least five days prior to a meeting. The request must describe the item so that the school superintendent and school board president can "fully understand and evaluate its appropriateness to be an agenda item."

The policy gives school officials the authority to accept, reject or refer the item back to the individual. It says the board will not respond to the presenter during the meeting but may choose to discuss the issue at a future meeting.

Parents Fitts, Atina King, Devin Freeman and Taylor Shirley submitted requests to be on the agenda and were approved to speak for a maximum of five minutes each at the board's Aug. 23 meeting in the high school commons area.

Two of the parents also took issue with the board's policy on allowing the public to speak.

King said she attended the Aug. 10 special meeting and was told she would not be allowed to speak in public. King noted that a special meeting called with only six hours' notice does not give time for anyone from the public to submit a request to be on the agenda.

She requested that the board change its policy to allow public comment at every meeting, especially special meetings.

Devin Freeman made the same request. He said members of the public should be able to show up 15 minutes early to a meeting and sign up if they would like to speak, even if only for 30 seconds or one minute.

Freeman also asked the school district to repeat its survey of parents on how they feel about universal masking on multiple platforms. He said he knew of people who did not know about the Google survey until he forwarded it to them.

"I'd like to make masks optional," Freeman said, adding he understood that staff members were concerned about covid-19, and the district could help with that by handing out N95 facemasks to employees.

King said she was disappointed that most of the board members did not appear to do their own research on the effectiveness of masks and only seemed to depend on information from the Centers for Disease Control and Prevention.

Taylor, who said she was a critical care nurse for seven years before staying home with her children, cited studies that show the germs and viruses found on masks after being worn for eight hours and cited other studies that indicated masks do not protect against the covid-19 virus.

"Please don't choose the mask mandate because it's the easy way out," Taylor said.

Masks are dehumanizing and hard on children, she added.

After the public comment period, the board met live via Zoom with Dr. Joe Thompson, president and CEO with Arkansas Center for Health Improvement and a professor with UAMS Colleges of Medicine and Public Policy.

Thompson said he heard the parents' comments, and that they were statements he's frequently heard from others. Some were legitimate concerns and others were misplaced, he said.

Thompson explained that the original covid-19 variant has mutated and this new variant, called the Delta variant, has swept across the country, especially in the south since the first part of July.

Thompson displayed several graphs that showed how cases increased in the state last year, were very low for a period beginning in May and June because of masking and the covid vaccine and then started spiking again in July because of the Delta variant.

"Delta attacks people in a different way," Thompson said, adding the state has record people in the hospital and record people on ventilators. In addition, he said the Delta variant is attacking younger people.

Thompson said some of the comments were true in that few children were affected in the first wave of covid-19. However, with the Delta variant, children "definitely" are being affected, he said, including children under 5 years of age.

"This is just a new threat and a threat to our younger adults, college age students and our schools," he said.

The covid virus is transmitted by respiratory droplets, the same as the influenza virus. Thompson noted that by people wearing a cloth mask last year, the state saw very little flu in adults or children. When the masks came off, the state started seeing respiratory infections come back.

"Now the Delta variant has come back and it's much more infectious. It's more than twice as infectious as the parent (variant)," he said.

Thompson encouraged parents to get vaccinated and to get their children 12 and older vaccinated to safeguard each other.

The best safeguards for children under 12 who cannot get a covid-19 vaccine are distancing and masking, he said.

That's why, Thompson said, he believes there should be a mask mandate, at least for the short-term. He added that he does not believe it will be a full-year experience.

After the meeting, Jon Laffoon, superintendent, said updated information about covid-19 will be presented and discussed at each board meeting. He said he heard Thompson speak at a summer conference and wanted the school board also to hear from him.

Stephanie Pinkerton, assistant superintendent, provided the board with the latest covid information for Farmington students and staff. As of Aug. 23, the district had 18 active student cases, 55 students in quarantine and one staff case, no staff in quarantine.