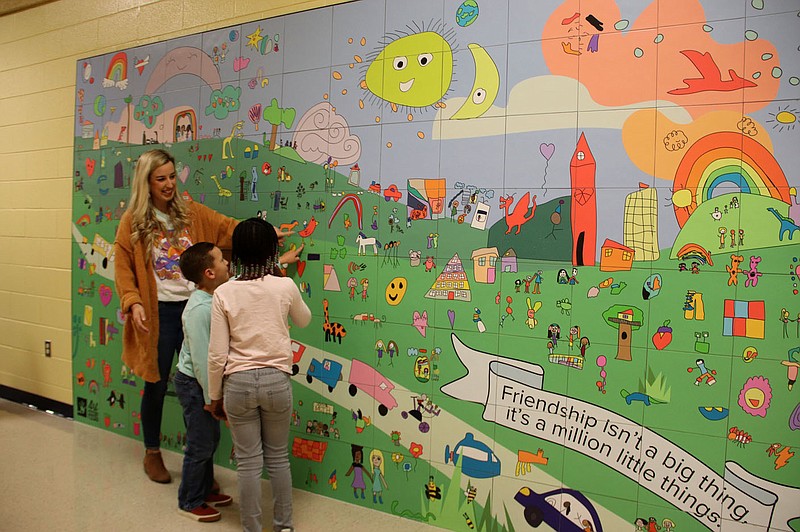 LYNN KUTTER ENTERPRISE-LEADER Students at Folsom Elementary School in Farmington came up with the theme, &quot;Friendship and Unity,&quot; for their new mural, now installed on a wall at the school. The mural is made up of artwork created by every student in the building. Teachers at the school came up with the phrase on the mural, &quot;Friendship isn't a big thing, it's a million little things.&quot;

FARMINGTON -- The countdown was on as all students at Folsom Elementary School sat on the floor in the hallway, waiting for a mural to be unveiled on a Friday morning in November.

It wasn't just any ole mural. This was a mural created by every student in the building.

They were not sitting quietly the entire time either, because it was an exciting time for everyone, teachers and students alike.

Meg Bourne, founder and CEO of Art Feeds, addressed them:

"You've been working so hard on something that is on this wall over here. What is it?" Bourne asked them.

They screamed back, "A mural."

"Who made it?" she asked them.

"All of us," they yelled back.

After talking to them a little bit more, she asked, "Are you ready?"

The answer was obvious, as they screamed, "YES."

The children had waited all week to see the mural covered by black paper and, as they counted down, the paper was removed and the cheers began.

The mural is a collaboration between Folsom art teacher Lauren Law, Principal Shannon Cantrell, all students in the school and the nonprofit organization called Art Feeds.

Law, a Farmington graduate in her fourth year at Folsom, heard about Art Feed's mural-making projects at a conference four years ago and has been fundraising for Folsom students to create their own mural since then.

"I think the students realized they don't have to be grownups or professional artists to make something super duper cool," Law said during the unveiling ceremony. "I'm so proud of them and want to thank everyone who made this possible."

Law said the project included four lessons. Students learned about mural making and selected a theme for the mural and basic colors.

Folsom children chose "Friendship and Unity" for their theme with pastels as the color palette. The background of the mural is called a "happy landscape."

Law said she talked to her students about friendship and the mural has a little bit of everything because "friendship means something different to everyone."

Pictures drawn by children on the mural include a treehouse, families, a rainbow, children holding hands as friends, handprints, lots of smiley faces, hearts and many animals.

Every child at Folsom made their own picture for the mural. Staff with Art Feed traced each line of the photos to create and put together an 8-foot by 10-foot mural that is now installed on one of the hallway walls at the school. Bourne said it took her staff 140 hours to trace each individual line.

Bourne said Art Feeds was started in 2009 in Joplin, Mo., to create safe places for children to express themselves through art. Along with the mural-making projects, the organization uses an in-school curriculum with about 10,000 children every year.

Art Feeds has closed its Joplin office and now has a Fayetteville office. It is heavily concentrated in Northwest Arkansas and the Joplin area but also works with schools across the country.

Folsom's mural is the 49th one created by Art Feeds. The 50th one will be with a school in Springdale. So far, Bourne said, 17,000 students have been a part of creating their own school mural.

Bourne said children learn a lot through the mural-making process.

"It shows them that their voice matters and their artwork can have an impact on their own communities," Bourne said. "It is an abstract concept to them and we tell them, 'hey, every single drawing of yours is going to go on one big image.' They can imagine it but when they see it for the first time, they really grasp it, 'whoa, I really did this with my peers.' With 360 kids being involved, this is pretty powerful."

Law said the mural is a "dream come true" for her. Some of her students talked at the unveiling ceremony Nov. 19 and answered questions.

First grader John Kauffman said the paintbrush buddies were his favorite part of the project. Takiya Palmer-Allen, a third grader, said the mural tells everyone about friendship and unity. Second-grader Collins White said the mural was made by "me, my friends and my school family."

The question to kindergartener Macy Hancock was, "Are you proud of the work you created?" Macy's answer was an emphatic, "Yes!"

Bourne said costs for the murals range from $5,000 to $10,000, depending on the number of children involved. Folsom's project was possible through the school's fundraising efforts, cash donations and in-kind donations for labor and materials. 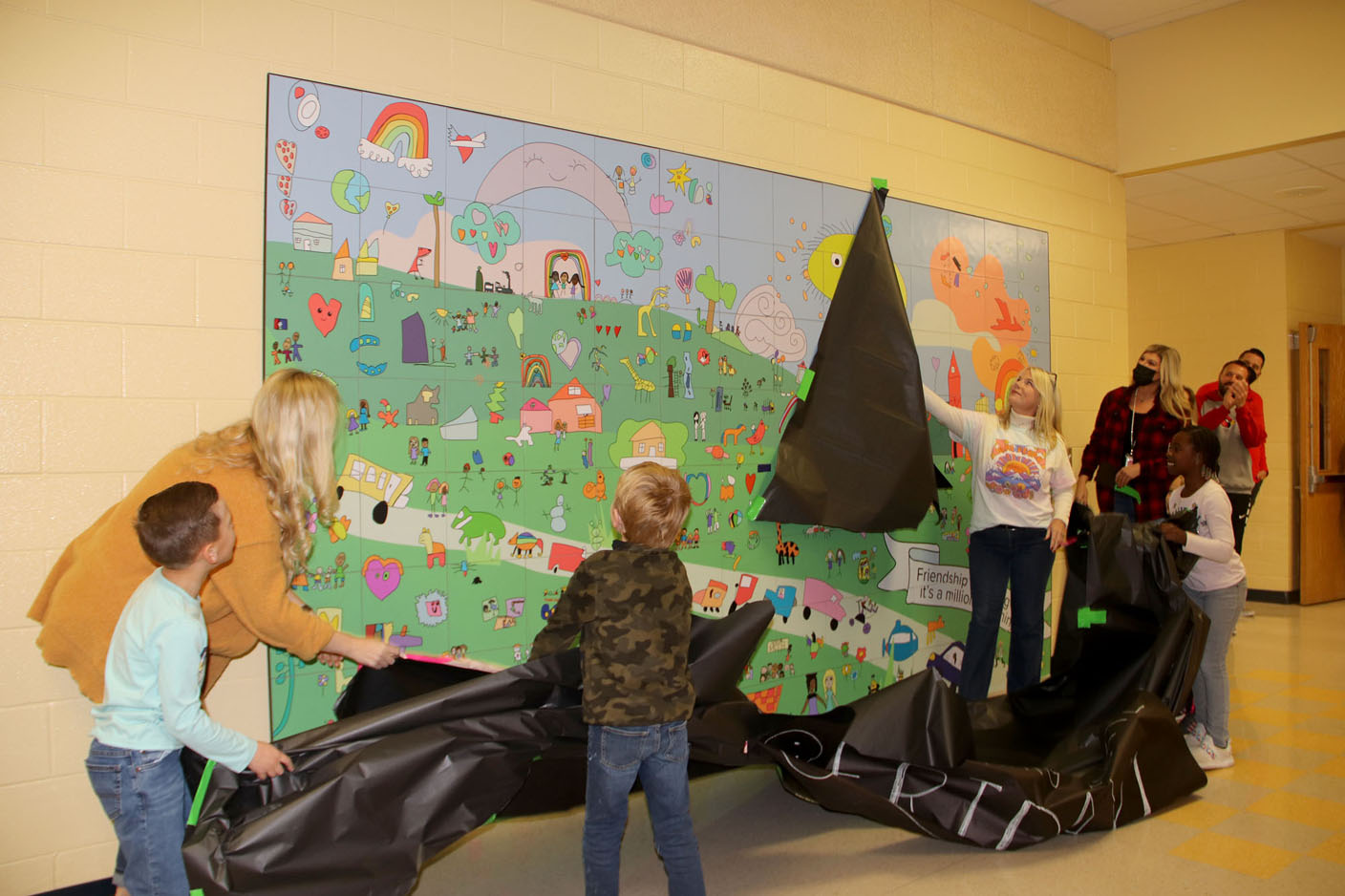 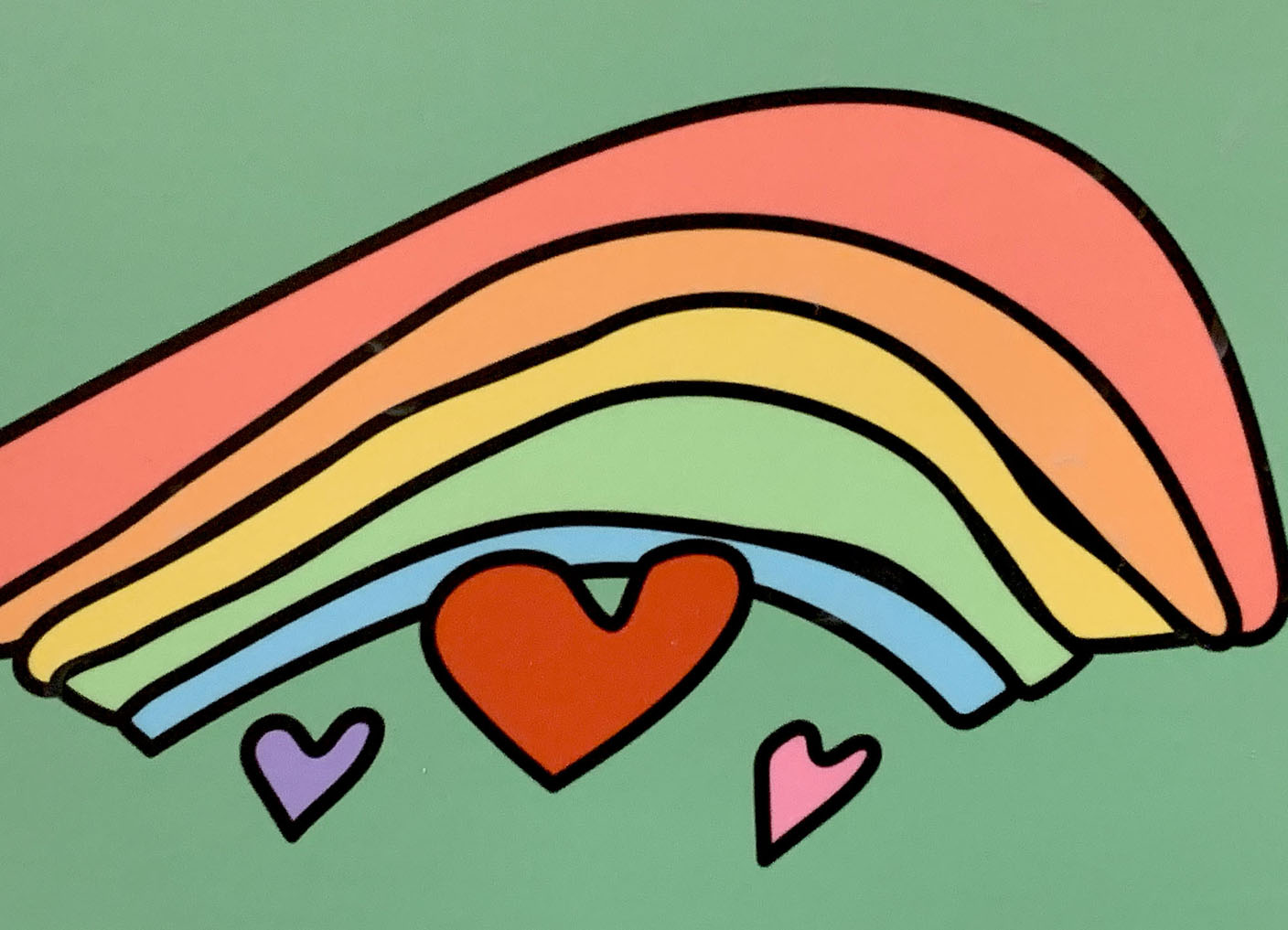 Rainbows and hearts, a picture of friendship and unit by this student for the Folsom mural. 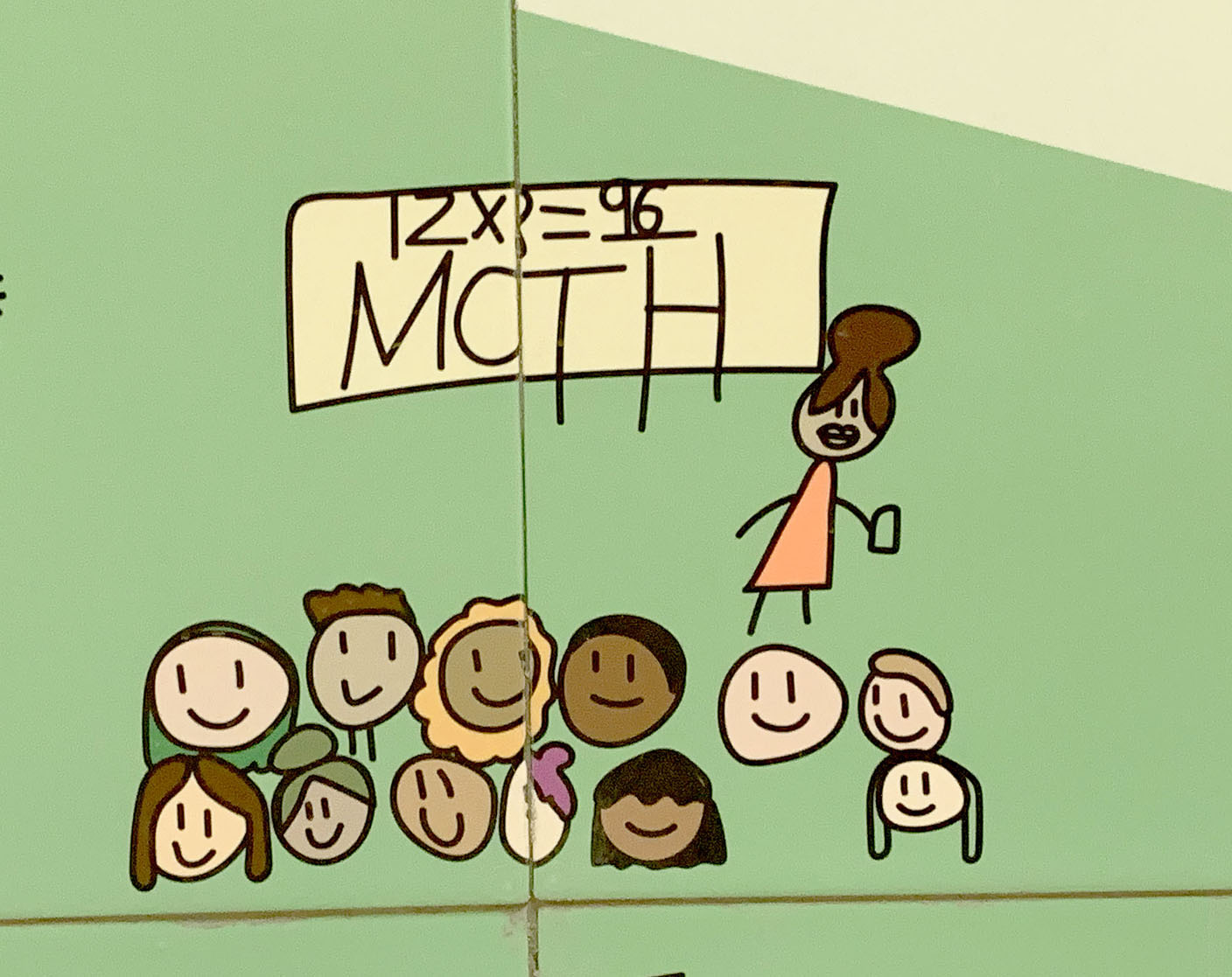 LYNN KUTTER ENTERPRISE The artwork from this student on the Folsom mural appears to show a math teacher with her students. The theme for the mural is Friendship and Unity. 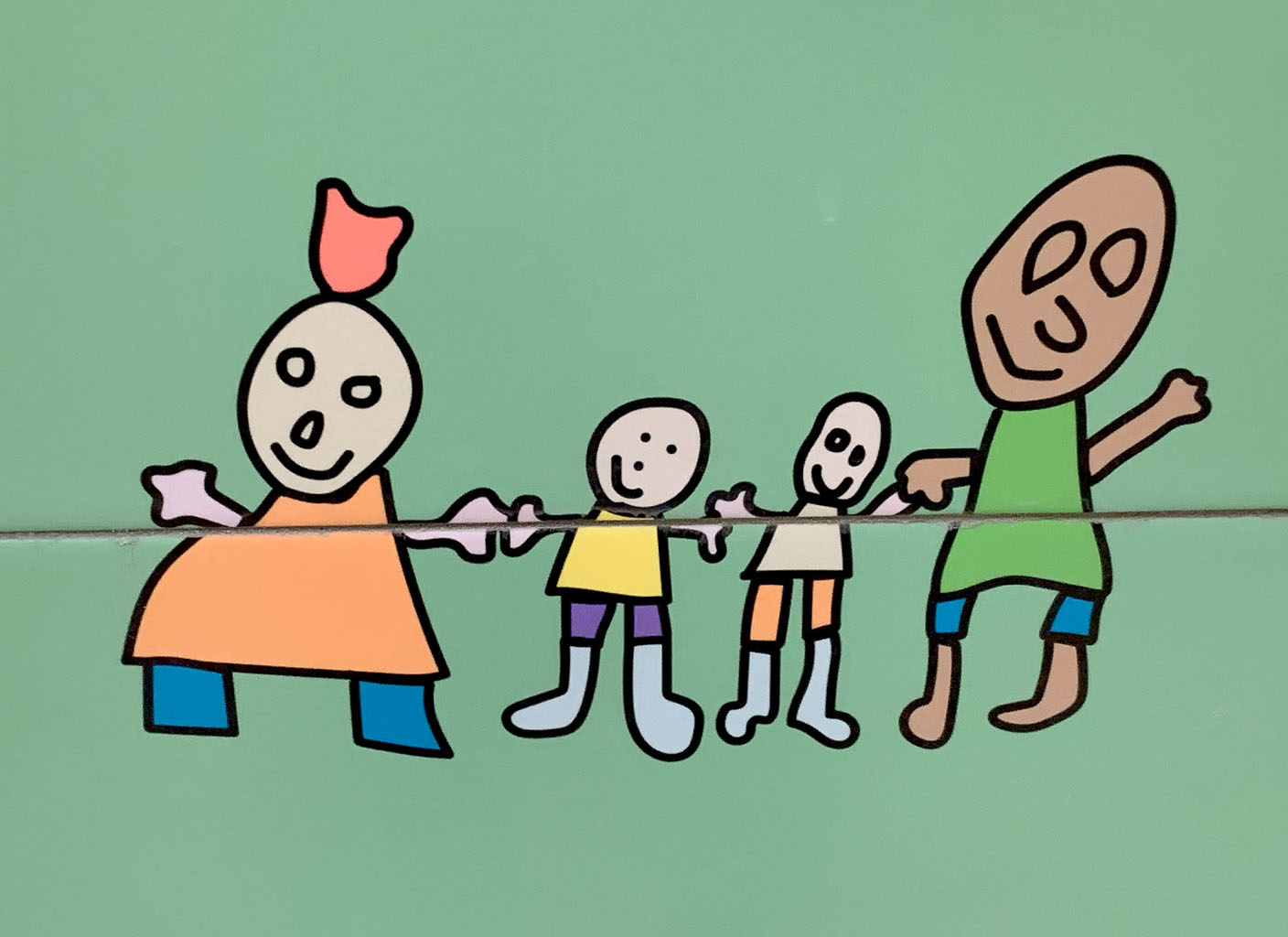 The Folsom mural has many pictures that appear to be the student's family.