Basketball Tourneys Postponed Due To Snowfall 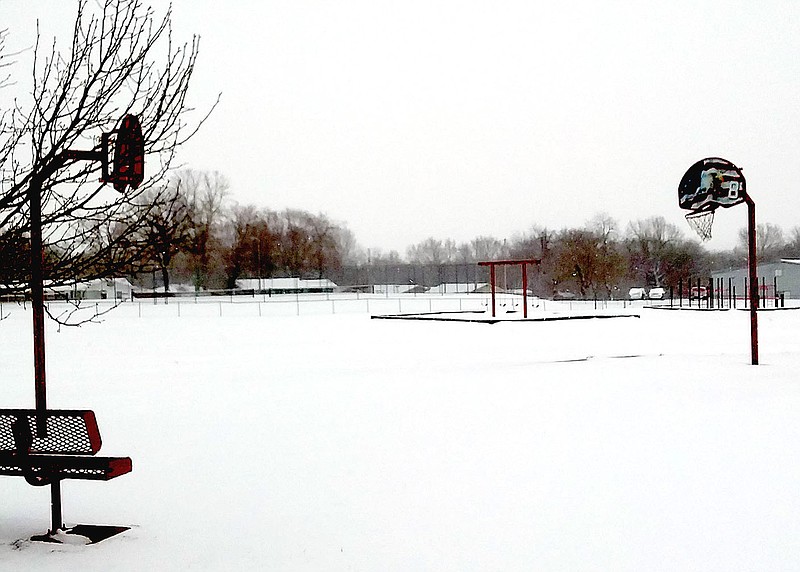 MARK HUMPHREY ENTERPRISE-LEADER/Heavy snowfall across Northwest Arkansas Sunday and Monday led to postponement of District 4A-1 basketball tournament games scheduled for Monday until later in the week with more snow expected Wednesday. As of press time Farmington's boys and girls teams as well as Prairie Grove's boys team were still alive vying for a Regional berth.

Snowfall across Northwest Arkansas Sunday and Monday led to postponement of the District 4A-1 basketball tournaments affecting boys teams from Farmington and Prairie Grove as well as Farmington's girls.

Prairie Grove boys were scheduled to host Shiloh Christian in a district quarterfinal Monday at Tiger Arena, but that contest, along with Farmington's girls game also against the Lady Saints set for Monday at Cardinal Arena, has been rescheduled tentatively for Thursday with more snow expected Wednesday.

Farmington's boys team, which won the 4A-1 regular season conference championship, awaits their opponent yet to be determined in a district semifinal scheduled for 6 p.m Friday at Cardinal Arena. The Cardinals will play either Huntsville or Harrison, which won tournament games against Gentry (64-26) and Gravette (69-66).

Shiloh beat Pea Ridge, 50-46, to get to the quarterfinal game at Prairie Grove. The winner of the Prairie Grove vs. Shiloh game will advance to a semifinal contest at Berryville.

The winner of the Farmington vs. Shiloh girls game advances to a semifinal game at Harrison.

The Prairie Grove girls team was eliminated from 4A-1 District tournament play with a 51-41 loss at Shiloh Christian on Saturday. On the other side of the bracket, Gentry knocked off Huntsville, 38-28, then lost to Gravette, 50-46. By virtue of its quarterfinal win, Gravette moves up the bracket into a semifinal at Berryville.

Lincoln's boys and girls teams suffered defeats and bowed out of the District 3A-1 basketball tournament Saturday. The Lincoln boys lost a heartbreaking, 57-55, decision in overtime to Green Forest at Wolfpack Arena Saturday afternoon.

Green Forest advanced to a semifinal meeting with No. 1 seed, Bergman, tentatively scheduled for Wednesday at 6 p.m. with an alternative date set for Friday. On the opposite side of the bracket, West Fork defeated Greenland, 62-45, then lost to Valley Springs, 68-63, in the other semifinal. In an unusual situation, Valley Springs may have to wait until Friday before their opponent in the 3A-1 boys championship gets decided.

Meanwhile in the girls bracket, the Lady Wolves sustained a 51-36 loss at West Fork on Saturday.