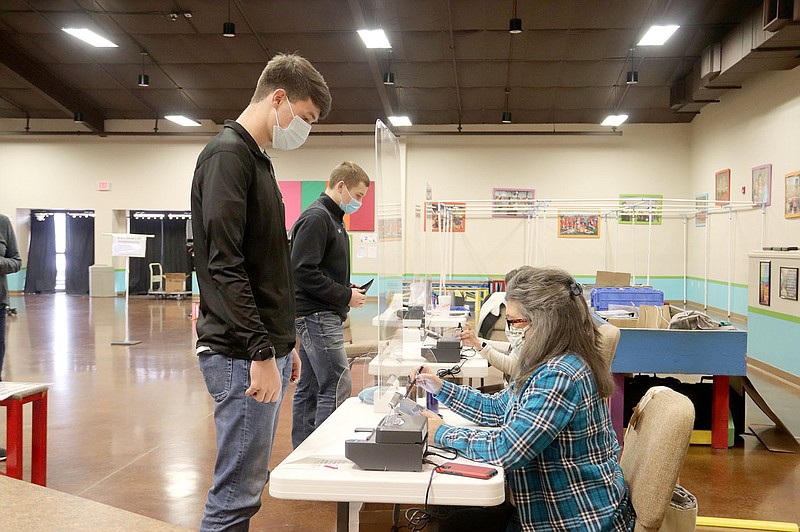 "We've reached out to the engineers," Oelrich said the day after the Feb. 9 election. While he is retired from the city of Prairie Grove, Oelrich still is helping out as needed. He will start working part-time for the city this summer in an administrative capacity.

Prairie Grove asked voters to replace two sales taxes -- a 1% sales tax and a 0.75% sales tax -- with two new sales taxes of the same amount to pay for bonds to finance capital improvement projects with a total estimated cost of $15 million.

In all, Prairie Grove's special election had nine questions on the ballot. Three of the questions related to refunding and re-issuing bonds and six questions sought approval for projects in specific areas.

Voters approved all nine questions, authorizing the city to issue bonds not to exceed a total of $18.3 million. The approval rate ranged from 78.49% for park improvement bonds to a high of 86.05% for water improvement bonds, according to a election summary posted by the Washington County Election Commission.

"This was the perfect way to fund over $18 million in needed projects that were very important to the citizens of Prairie Grove and to be able to move forward without changing the current rate of taxes or cost of service," Hudson said in an email. "This made it possible for the city to save money on interest rates and construction cost. Thanks to the council members, employees and the media for getting the information out to our voters."

The turnout was low; only 172 votes were cast for the Prairie Grove city election, out of 4,567 registered voters, a turnout of only 3.77%.

"It's always nice if more people turn out," Oelrich said. "But you cannot ask for more than 80% approval on a bond issue. That's fantastic. The people who wanted it got out and voted."

The city received some feedback on social media sites after the election on whether it did a good job telling citizens about the election.

Oelrich said he would question those concerns. Information about the election was posted on the city website several times, on social media and through local and area print and broadcast media, Oelrich said.

He said he doesn't think the interest was there for this election because of the reach shown on the city website and city's social media. Usually the city has a reach of 10,000 people, Oelrich said. For the election information, the reach was only about 500-1,000 people.

"I just think people were satisfied it was a good product, and it was a yucky day," Oelrich said about the low turnout.

Several voters Tuesday explained why they supported the city's plans.

Janet Gardner said she voted "yes" for all nine questions "because it helps improve Prairie Grove and its citizens." Gardner said she especially supported the plans to replace old water pipes.

Voter Vance Eubanks, pastor of Prairie Grove Christian Church, said he voted for the proposals because Prairie Grove is growing and the city has to keep up with its infrastructure needs.

Another resident, Ric Carlson said, "I voted for all of them because it's stuff we need. Putting it off doesn't help. We'll still need it."

Oelrich said he has already contacted Olsson Inc., and Burns and McDonnell Engineering Co., about the election results.

Burns and McDonnell also has been contracted by the city for a major drainage project in the downtown area. Olsson has been contracted by the city to design a new four-way intersection at Viney Grove and Bush streets, along with extending Viney Grove Road to U.S. Highway 62 B. The election results authorized a maximum of $2.95 million for drainage improvement bonds and up to $3,495,000 in street improvement bonds.

The fire improvement bonds, up to $995,000, will be used to purchase a new fire pumper truck. Fire Chief J.C. Dobbs has been given the green light to price trucks, Oelrich said.

Oelrich said the city will start discussions on plans to rehab the aquatic center and perhaps install a splash pad but will not "get serious" about this project until the pool closes after the 2021 summer season. The city is authorized to issue a maximum of $995,000 in bonds for park improvement projects.

According to Crews & Associates, the bonds will probably be offered for sale in late March, Oelrich said.