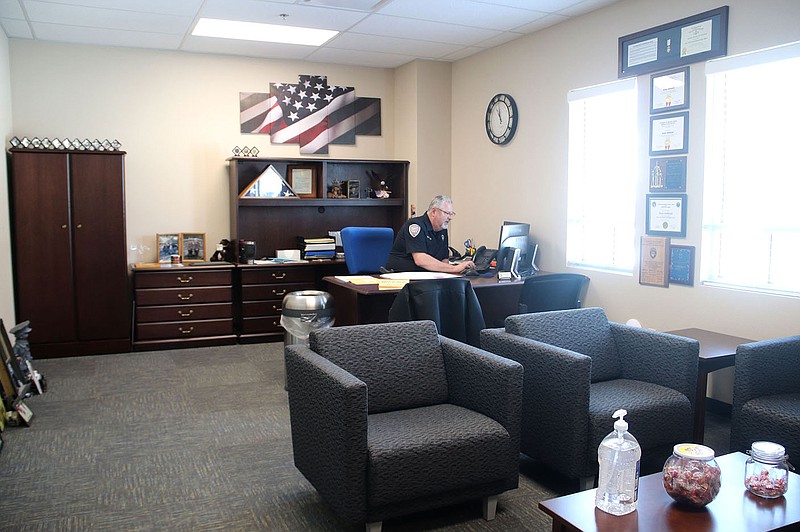 LYNN KUTTER ENTERPRISE-LEADER The new office for Farmington Police Chief Brian Hubbard has a comfortable sitting area for people who want to come in and talk to him about different issues or problems. Hubbard has talked about the need for more space at the police department for years. The department moved into its new space in November.

FARMINGTON -- The expansion of the city's police headquarters has been an "absolute morale booster" for police officers, according to Chief Brian Hubbard.

"I've talked about more space with the mayor for years and years," Hubbard said last week. "It finally got around to where everything fell in place, and we just did it."

The department has needed space as it added officers to keep up with the city's population growth, said Hubbard, who has worked for Farmington for more than 20 years.

"It's like wearing your sixth-grade sneakers when you're in high school," he said. "They're just not going to fit anymore."

The City Council approved one new position for 2021, and Hubbard is in the process of looking at applications now to fill that spot.

THe City Council in March 2020 approved a low bid of $520,000 from Oelke Construction of Lowell for the 2,800-square-foot police addition. The bid also included a new mechanical heating/air unit for City Hall.

In August 2020, the council approved an ordinance to waive competitive bidding to purchase evidence lockers, personnel lockers, furniture and furnishings, not to exceed $90,000, for the department.

The expansion includes larger office space for the chief, Capt. Mike Wilbanks and Lt. Chad Parrish. Wilbanks and Parrish each have a conference table in their offices to hold meetings with more people at one time.

Hubbard said his office has a couch and chairs for those times when people come in and want to talk about issues or just need to "vent."

"Instead of sitting in hard chairs, I can bring them into a more comfortable place," he said.

The department's patrol sergeants are in a separate office, the chief's former office in the old part of the department.

The addition has evidence lockers and a secured room to store evidence, personnel lockers, a separate conference room, breakroom, restroom with shower facilities, and a storage room for supplies.

One important change, Hubbard said, is Detective Justin Collins and Administrative Sgt. Billie Virgin are no longer in an unsecure area in City Hall but are now in their own offices behind locked doors with the rest of the department.

Hubbard said he's been sketching out ideas for expanding the building for many years. His plans have come from other police departments and from ideas suggested by his officers.

"Finally, the sketch came to life," Hubbard said, adding the expansion has pretty much everything he wanted.

"This is going to last us for quite a while, until we grow and bust at the seams again, which will be years down the road," he said.

Virgin, who has been with the city of Farmington for 23 years and with the police department since 2008, said she believes the expansion is especially helping the patrol division.

"From my perspective, it's more organized and easier for the officers to function because they have their own space now. The officers now have a full working desk," Virgin said.

The expanded headquarters also helps with communication among all employees, Virgin said. The chief, captain and lieutenant can meet with more officers at one time now. She and Collins are not separate from the rest of the department.

"Our workflow is better because we have better access to each other," Virgin said.

For Virgin, the expansion has given her space to store all her files. Previously, she only had space for current files and had to go back and forth to the storage building behind the police station if she needed information from other cases.

Mayor Ernie Penn said the police expansion is a good thing for the city and the police department.